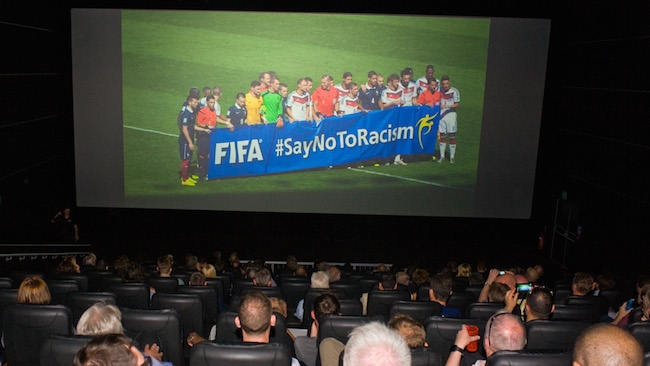 However uneven the action on the field may have been, the broadcast technology behind the World Cup has been an enormous success with Sony’s live 4K screening of the Germany vs France match setting the bar for the next tournament in Russia in 2018. By Paul Saint.

By all accounts it wasn’t an easy production to put together, but Sony and HBS managed to not only capture a clutch of World Cup matches in Brazil in glorious 4K but also arrange a live cinema screening at a London multiplex of two of them to prove that 4K can be comfortably carried by satellite today using H.265.

Sony partnered with IDC, Eutelsat and DSAT Cinema to deliver the screenings, with the companies working together to provide the satellite feed, signal decoding and 4K projection. Eutelsat received the signal from Brazil at its teleport near Paris, re-encoded it in Ultra HD HEVC at 60fps, and retransmitted it to the EUTELSAT 5 West A satellite for direct distribution to the cinema where it was fielded by IDC-supplied kit. It was then screened using Sony's SRX-R320 4K digital cinema projection system.

That it was the rather underwhelming quarter final between France and Germany that was chosen as the first match was, perhaps, unfortunate. But despite the lack of onscreen action the picture quality was amazing, with some superb camera angles making the most of the dozen Sony F55s sited around the ground. An additional Sony F65 was also used for the super slo mo.

The atmosphere was a little strange — we’re predisposed to being quiet in cinemas, which is an unusual thing for a football match — but the images were absolutely stunning, in fact showing up the weak points in the quality of the cinema screen. And, despite the quality of the soccer on screen, it felt like we were watching a little bit of history. Come the 8th of July 2018, you feel that an awful lot more people will be watching the opening game of the next World Cup in 4K