Fight! The Human Eye vs the Sony a7S II 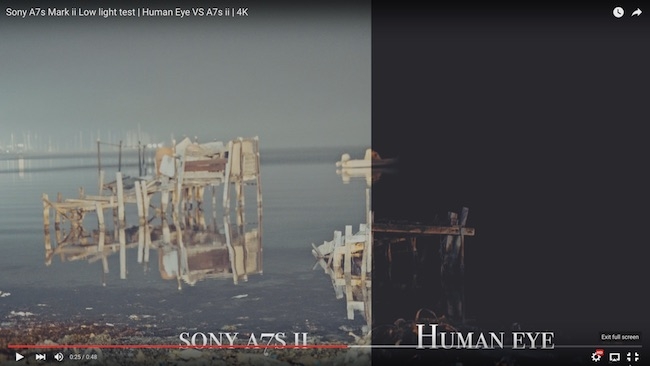 In a mere 48 seconds, Greek photographer Armen Bojikian illustrates exactly why cameras such as the Sony a7S II get people quite so excited in low light.

It is perhaps not the most foolproof nor subjective test ever undertaken, but it does illustrate nicely the capabilities of cameras like the a7S II in low light.

“While searching for a dark place to test the high iso of the a7S II I found out that there isn't any place enough dark for it,” Bojikian writes.

To mimic the performance of the human eye, he took the same shots with the same camera but with iso set at 1600 and shutter speed around 100-200 (which was roughly what he could see with a dark-adapted eye). He then used those shots as a reference in post to stop down the exposure of the higher iso shots.

Scientific? Not a bit of it. The below video really needs to come with a caption along the lines of ‘For illustrative purposes only’, but it does show what we’re becoming used to in this area. We can only guess what the same sort of test with the Canon ME20F-SH would look like.

With thanks to PetaPixel for the head’s up!