The DJI RS 3 Pro gimbal promises to give your mirrorless camera similar capabilities to the revolutionary Ronin 4D. Phil Rhodes takes DJI's latest, and most advanced gimbal for a test drive.

Being able to move a camera without laying down a metric ton of equipment is great, but it makes operating and focus pulling difficult. DJI’s most recent small gimbal offers features that seem intended to ease exactly those concerns.

DJI’s new RS 3 Pro, reviewed here with the optional lidar rangefinder, is not tiny. It’s small in that it’s smaller than a Ronin 2, but it’s big enough to handle smaller cinema cameras. With the arms extended it’ll accommodate a Komodo or FX6 with a full-sized mechanical lens. One of the benefits of the Pro version is that it can handle cameras up to 4.5kg, although it’s still a device designed for one-handed use, and the supplied grips might end up feeling a little inadequate at that point.

The gimbal is seen here with the mighty Fujifilm X-H2S paired with a Fujinon 18-120mm zoom. For now, let’s agree that 6.2K ProRes recordings made aboard a gimbal that can be handled one-handed through most setups at an almost prosumer price point is a concentration of filmmaking potential that would make someone from the early 2000s scoff in disbelief.

Improvements over the RS2

The RS 3 enjoys an improved stabilisation algorithm over the RS 2, as well as featuring a larger OLED touchscreen and motorised axis locks, so switch-on is a one-button operation. Setup is the same as on any stabilised head or gimbal – ballpark the mechanical balance of all three axes, starting at the far end and working back toward the grip, calibrate, and go. Engaging Supersmooth mode increases motor torque, sacrificing battery life for glass-smooth pictures. Give or take mounting complexities, it can be out of the box and stabilising a previously unseen camera in minutes.

Or, at least, it can if you have the cellphone app. Factory-fresh (or, presumably, factory-reset) gimbals insist on being activated at the sixth switch-on. Generally that’s trivial, as it’s easy to download the app, set up an account, connect to the gimbal and activate it. This does raise the spectre of a gimbal forgetting it’s been activated and demanding the user do all that while the rest of a crew stares accusingly, or, worse, somewhere remote and outside network coverage. The cellphone app is not required to use the gimbal’s basic features, and insisting on online registration after a certain number of startups is an antifeature. 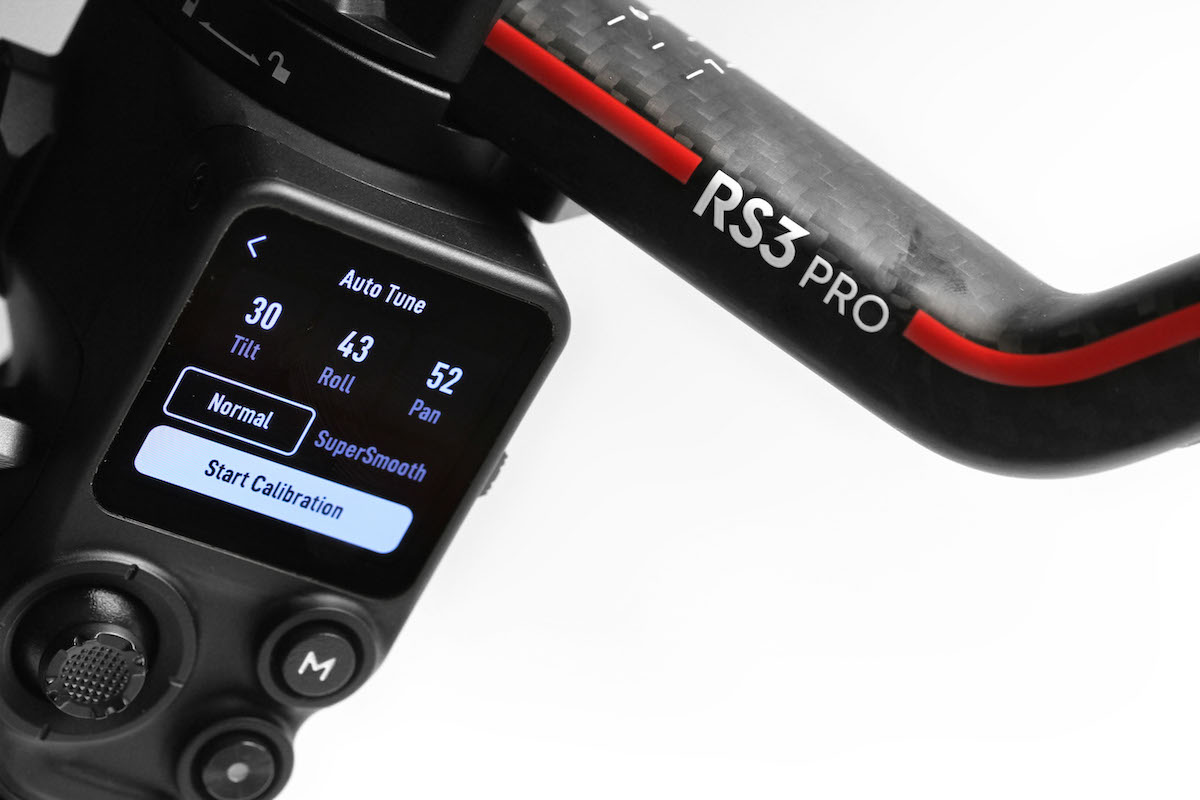 The optional lidar module is particularly interesting. The gimbal runs a little under £1000, while the lidar module is about half that, so it isn’t a cheap option (although are we really objecting to £500 for a high frame rate imaging rangefinder?) It’s likely to be a popular choice for anyone who works alone but needs the best possible prospects of producing well-composed and sharply focussed images. It includes a wide-angle witness camera, used for feature tracking alongside the time-of-flight depth scanner, which provides a 240 by 180 depth map of the scene.

This adds subject tracking and lens-independent autofocus slaved to that tracking. There are a couple of situations which will upset this – for a start, the Fuijnon 18-120 is a servoactuated lens without a mechanically-coupled focus ring. DJI supply a wrap-around focus gear but the whole setup really needs proper mechanical-focus lenses, whether that’s a real movie lens or a reasonably well-converted stills prime with appropriate gearing. 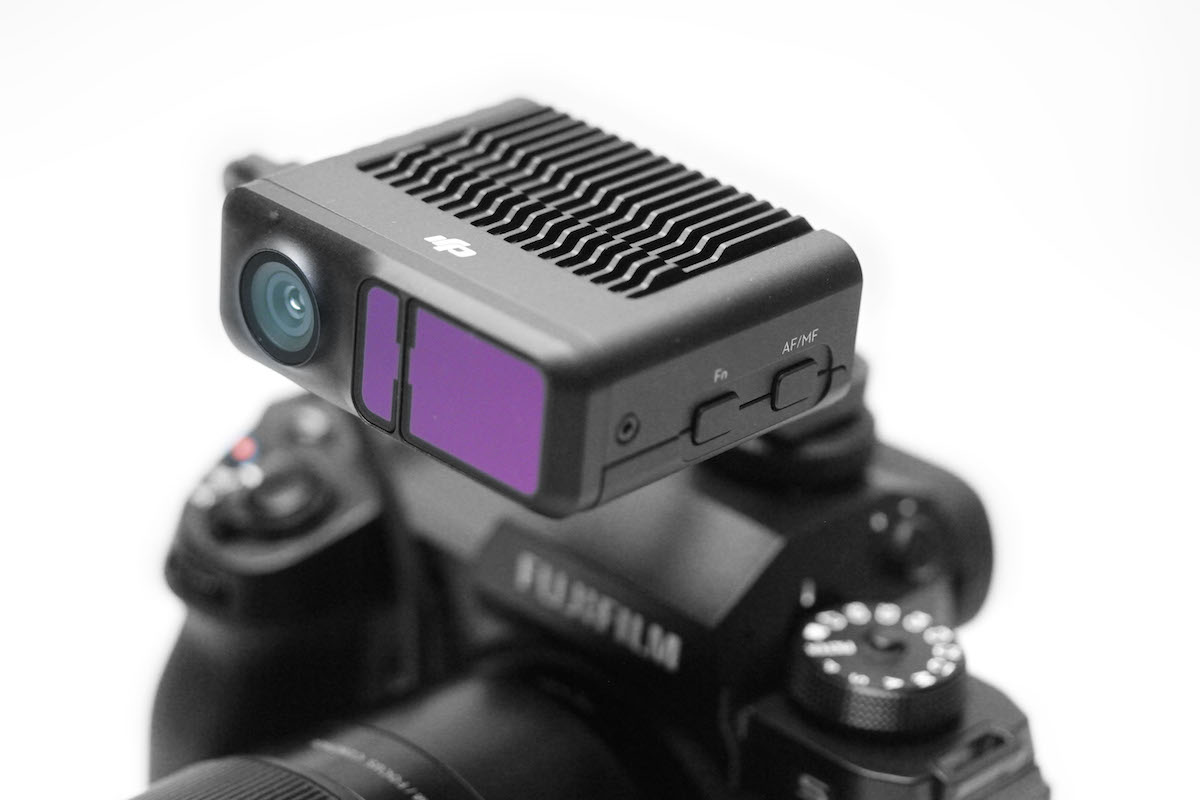 The lidar module rides on the Fujifilm X-H2S. the round lens is the witness camera; the smaller of the two purple coated windows has the laser emitter.

Like any tracker it can lose targets in mixed light or if they’re partially occluded. Laser rangefinding of this type detects distance by timing pulses of light and avoids the need to do image matching with two parallax cameras, as in something like an X-Box Kinect. That means it doesn’t have so many problems with objects of different surface textures and colours, though the maximum range of the rangefinder itself is perhaps 14m in controlled lighting conditions, or considerably less in bright sunlight. 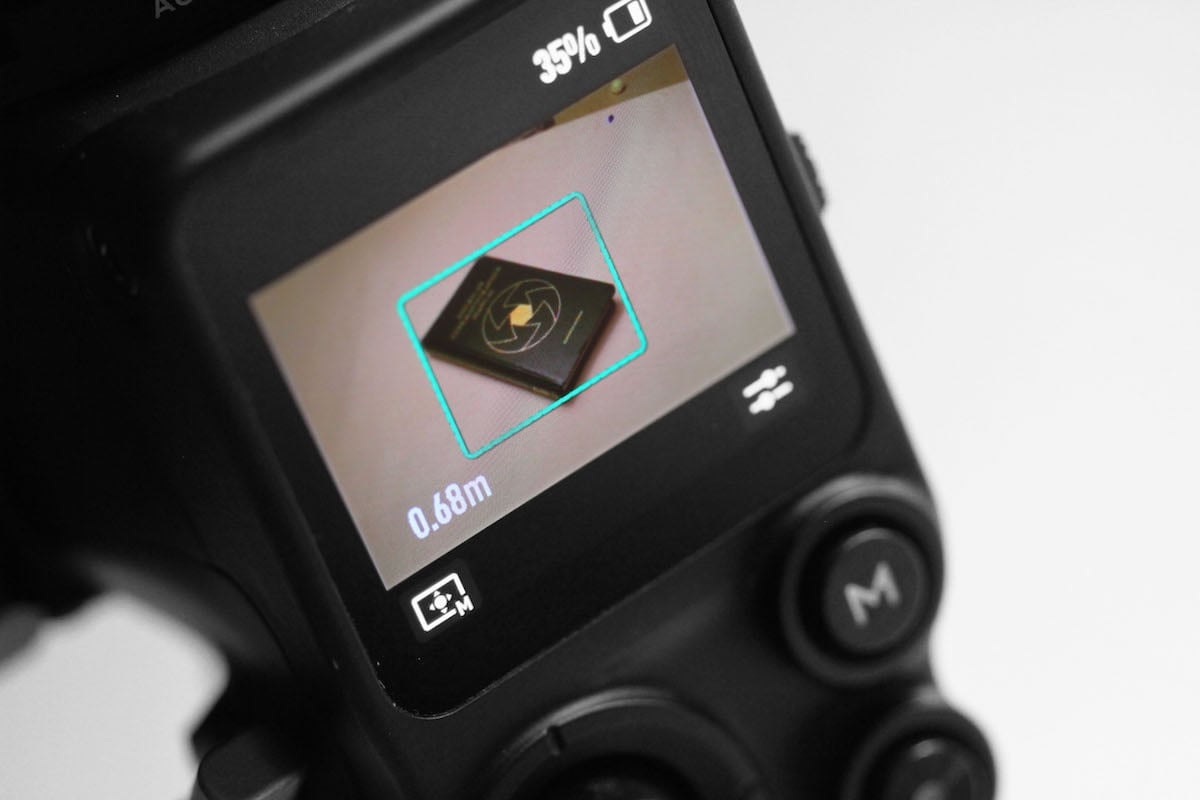 Let’s be fair: it won’t be replacing something like Canon’s extremely clever phase-detection autofocus systems which rely on proprietary lenses and significant extra, proprietary technology in the sensor. Phase-detection works on long lenses at long ranges, which lidar won’t.

Within those limitations, though, the system will keep a subject framed and sharp without user intervention, which is an enormous amount of capability to have literally under the thumb of a gimbal operator. The little OLED on the handgrip is bigger than the previous version, and about as big as it could be on a gimbal grip, but it’s still a small target for this sort of thing and it can feel pokey and awkward when selecting tracking targets. This is where the larger displays come in, leveraging the radio communications provided by the Raveneye module.

Streaming video to a cellphone over WiFi is never going to challenge a Teradek for immediacy, but DJI does pretty well, considering. The result is a much larger display on which to select tracking targets, as well as LUTs and some some test and measurement displays. The really nice feature, though, is the ability to operate the shot by tilting the phone. The delay is enough that operating in this way isn’t wonderful, although usability would depend on the shot. Having someone else operate while a grip navigates the gimbal through the shot helps enormously. 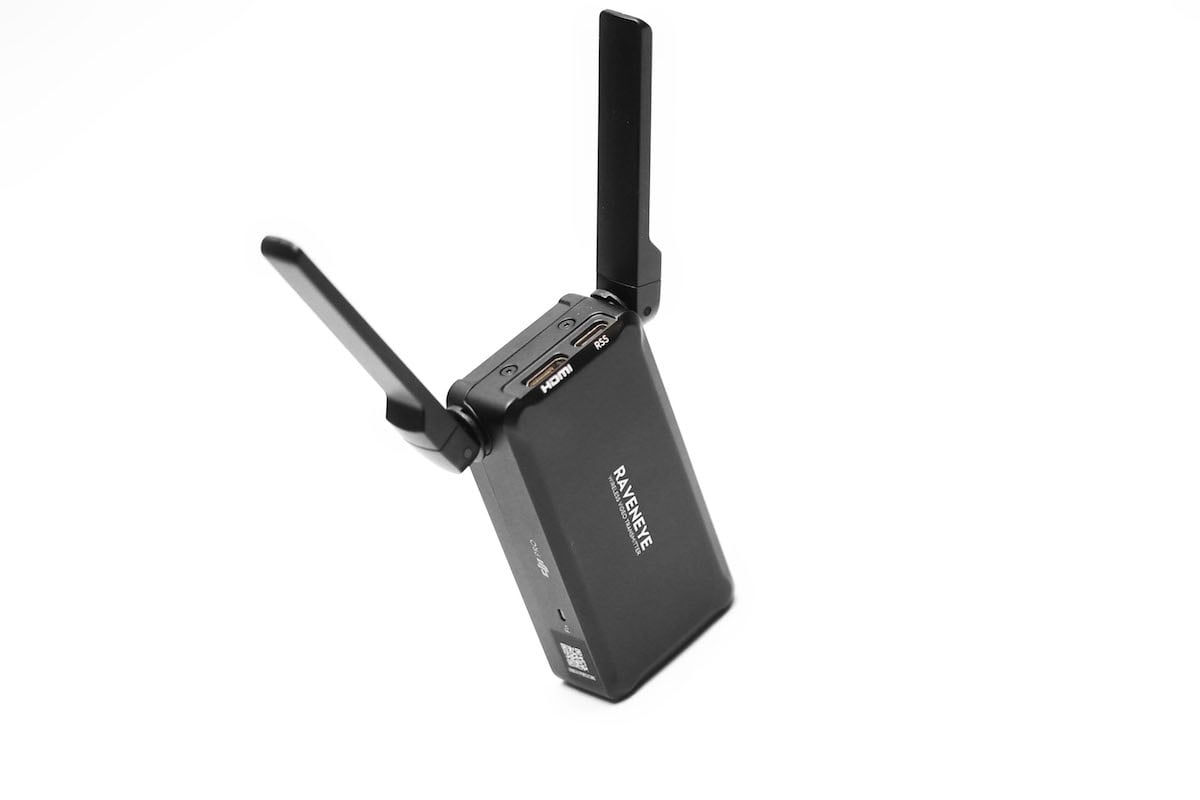 The Raveneye module sends video to phones, latching easily into place below the camera platform. Assembly and structural integrity are all well-handled.

Similar features are available in the Transmission system, which is a dedicated transmitter and integrated receiver-monitor-controller, with onboard recording of the system’s 50Mbps transmitted stream. Transmission costs one and a half times what the gimbal does, and so might be a more common partner for a Ronin 2. The remote pan and tilt control is all there, just as with the cellphone app; DJI’s demo material even shows it magic-armed off a fluid head so it can be operated like a conventional camera.

DJI claims a six kilometre range, and while it’s essentially impossible to validate radio ranges given all of the things that can affect them, it’s certainly got a healthy degree of reliability over the ranges most people will encounter on film sets. One for the drone people, perhaps. The Transmission monitoring system really demands a review of its own, given it can compete alongside the likes of Accsoon as a Teradek alternative, though Teradek is still faster. 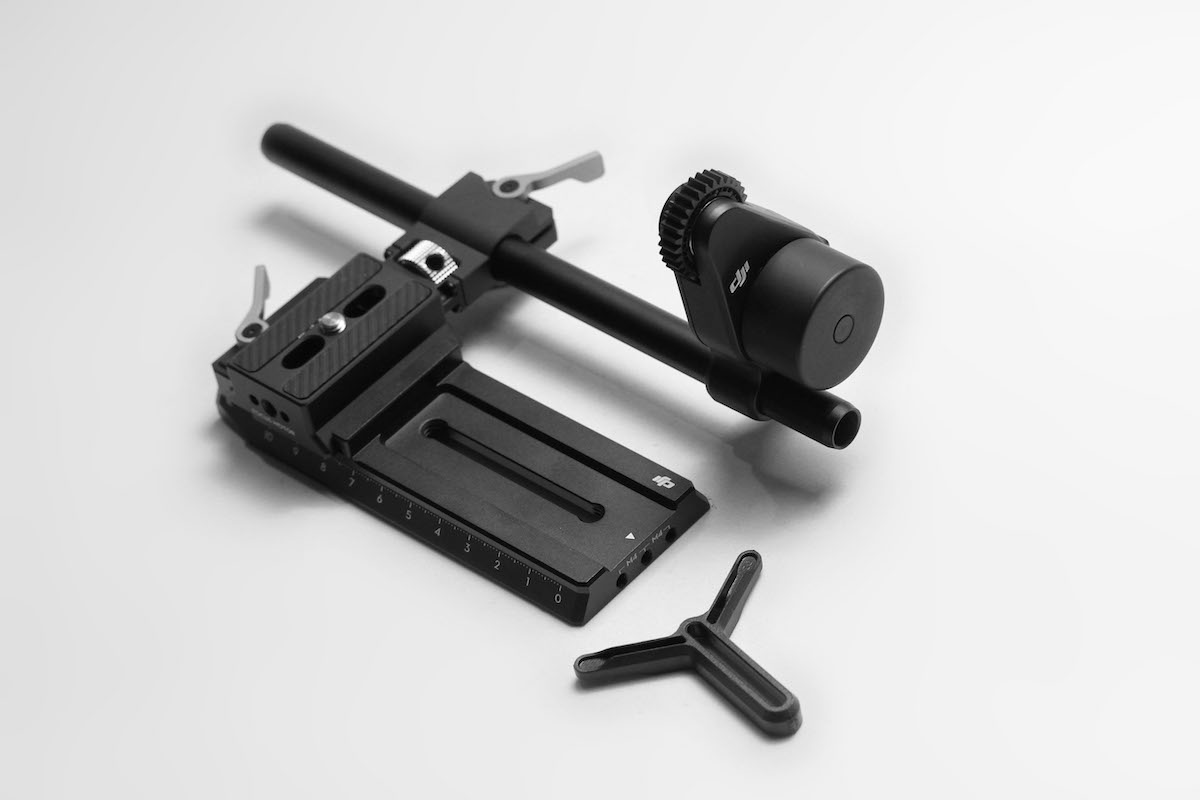 This is the focus motor assembly, shown assembled to the camera platform without camera. The rod is not a standard 15mm; this is all much more compact than it may look.

The sheer bulk of this review tells us something about DJI’s interest in integration; a complete RS 3 Pro gimbal setup is capable of a lot of things. Those things seem well-chosen to make the freedom of gimbal shooting work – the tracking and the autofocus potentially ease at least some of the concerns inevitably associated with a free-roving camera. For anyone who’s worked on anything like a real single-camera drama, it’ll instinctively feel like a good idea to let one person carry and another operate, and this system lets you do that with nothing more than a cellphone. The word is probably “democratisation.”

If there’s a problem with the almost universal popularity of gimbals it’s that with great power comes great responsibility, and inexperienced people often find themselves blocking and shooting the sort of setups that take more time, gear and experience than they really have – but at least now they can afford to try, and try with some hope of the results being sharp.