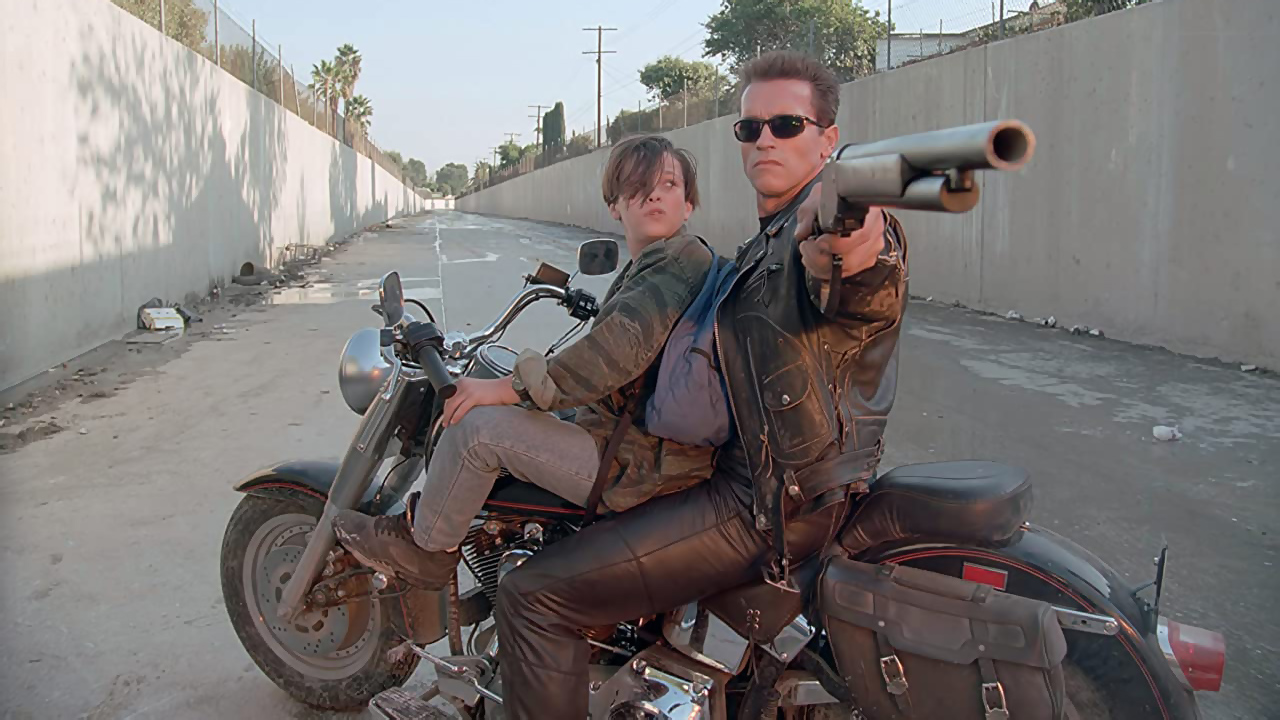 3 minute read
Come with me if you want to live. Terminator 2 is 30 years old this year.

Replay: This year, Terminator 2: Judgment Day turns 30. Made by a director and star at the peaks of their powers, T2 was the most expensive film ever at the time, and remains both the highest-grossing movie of Arnold Schwarzenegger’s career and the sequel which furthest out-performed its progenitor. It is also one of a handful of films that changed the world of visual effects forever, signalling as it did – to borrow the subtitle from its woeful follow-up – the rise of the machines.

The best teaser trailer ever made?

The original Terminator, a low-budget surprise hit in 1984, launched director James Cameron’s career and cemented Schwarzenegger’s stardom, but it wasn’t until 1990 that the sequel was green-lit, mainly due to rights issues. At the Cannes Film Festival that year, Cameron handed executive producer Mario Kassar his script.

Today it’s easy to forget how risky it was to turn the Terminator, an iconic villain, an unstoppable, merciless death machine from an apocalyptic future, into a good guy who doesn’t kill anyone, stands on one leg when ordered, and looks like a horse when he attempts to smile. But Kassar didn’t balk, granting Cameron a budget ten times what he had had for the original, while stipulating that the film had to be in cinemas just 14 months later.

Even with some expensive sequences cut – including John Connor sending Kyle Reese back through time in the heart of Skynet HQ, a scene that would ultimately materialise in Terminator Genisys – the script was lengthy and extremely ambitious. Beginning on October 8th, 1990, the shooting schedule was front-loaded with effects shots to give the maximum time for CGI pioneers Industrial Light and Magic to realise the liquid metal T-1000 (Robert Patrick). 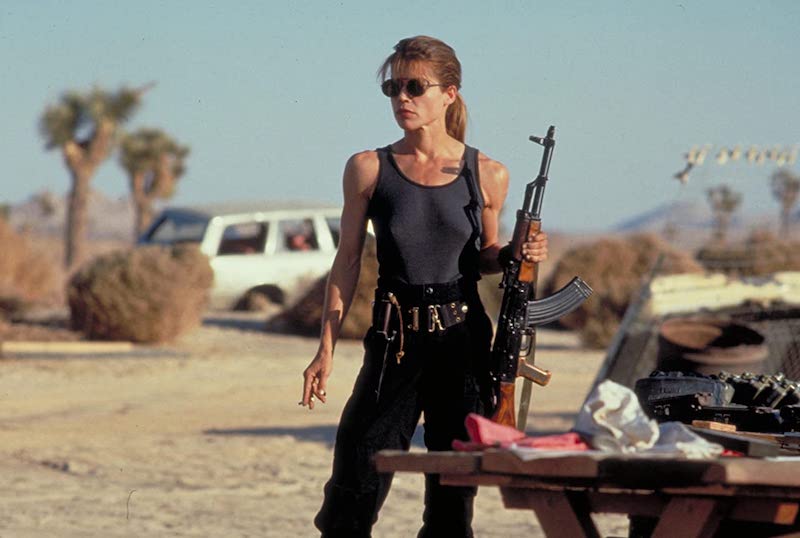 To further ease ILM’s burden, every trick in the book was employed to get T-1000 shots in camera wherever possible: quick shots of the villain’s fight with the T-800 (Schwarzenegger) in the steel mill finale were done with a stuntman in a foil suit; a chrome bust of Patrick was hand-raised into frame for a helicopter pilot’s reaction shot; the reforming of the shattered T-1000 was achieved by blowing mercury around with a hair dryer; bullet hits on the character’s torso were represented by spring-loaded silver “flowers” that burst out of a pre-scored shirt on cue.

Stan Winston Studio also constructed a number of cable-controlled puppets to show more extensive damage to the morphing menace. These included “Splash Head”, a bust of Patrick with the head split in two by a shotgun blast, and “Pretzel Man”, the nightmarish result of a grenade hit moments before the T-1000 falls to its doom in the molten steel.

Traditional models and rear projection are used throughout the film. A few instances are all too obvious to a modern audience, but most still look great and some are virtually undetectable. Did you know that the roll-over and crash of the cryo-tanker were shot with miniatures? Or that the T-800 plucking John off his bike in the drainage channel was filmed against a rear projection screen?

Plenty of the action was accomplished without such trickery. The production added a third storey to a disused office building near Silicon Valley, then blew it up with 100 gallons of petrol, to show the demise of Cyberdyne Systems. DP Adam Greenberg lit 5.5 miles of freeway for the car chase, and pilot Chuck Tamburro really did fly the T-1000’s police helicopter under a 20ft underpass.

Chaotic, confusing action scenes are the norm today, but it is notable that T2’s action is thrilling yet never unclear. The film sends somewhat mixed messages though, with its horrific images of nuclear annihilation and the T-800’s morality lessons from John juxtaposed with indulgent violence and a reverence for firearms. “I think of T2 as a violent movie about world peace,” Cameron paradoxically stated. “It’s an action movie about the value of human life.”

Meanwhile, 25 person-years of human life were being devoted by ILM to the T-1000’s metallic morphing abilities. Assistant VFX supervisor Mark Dippé noted: “We were pushing the limits of everything – the amount of disc space we had, the amount of memory we had in the computers, the amount of CPUs we had. Each shot, even though it only lasted about five seconds on the screen, typically would take about eight weeks to complete.” 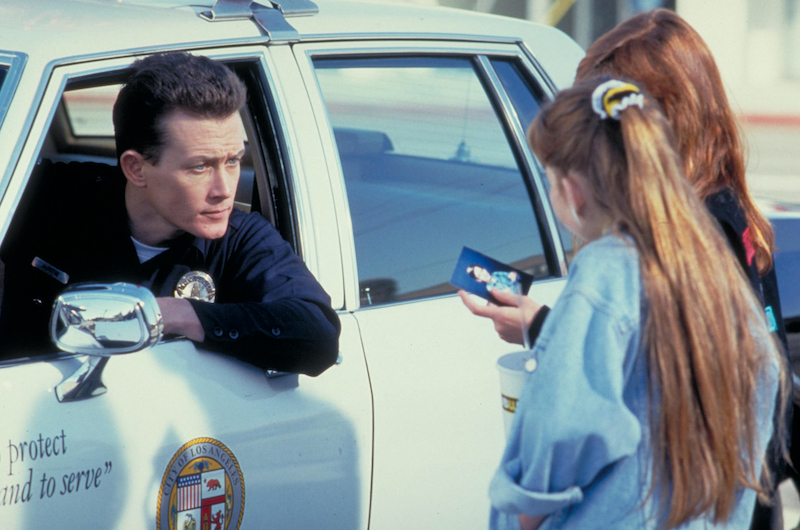 The team began by painting a 2x2” grid on a near-naked Patrick and shooting reference footage of him walking, before laser-scanning his head at the appropriately-named Cyberware Laboratory. Four separate computer models of the T-1000 were built on Silicon Graphics Iris 4Ds, from an amorphous blob to a fully-detailed chrome replica of Patrick, each with corresponding points in 3D space so that the custom software Model Interp could morph between them.

Other custom applications included Body Sock, a solution to gaps that initially appeared when the models flexed their joints, Polyalloy Shader, which gave the T-1000 its chrome appearance, and Make Sticky, with which images of Patrick were texture-mapped onto the distorting 3D model, such as when he melts through a barred gate at the mental hospital.

The film’s legacy in visual effects – for which it won the 1992 Oscar – cannot be understated. A straight line can be drawn from the water tendril in Cameron’s The Abyss, through T2 to Jurassic Park and all the way on to Avatar, with which Cameron again broke the record for the highest-grossing film of all time. The Avatar sequels will undoubtedly push the technology even further, but for many Cameron fans his greatest achievement will always be Terminator 2: Judgment Day, with its perfect blend of huge stunts, traditional effects and groundbreaking CGI.

Watch Robert Patrick revisit some of the locations used in the film, and to see him recreate the T-1000 run!