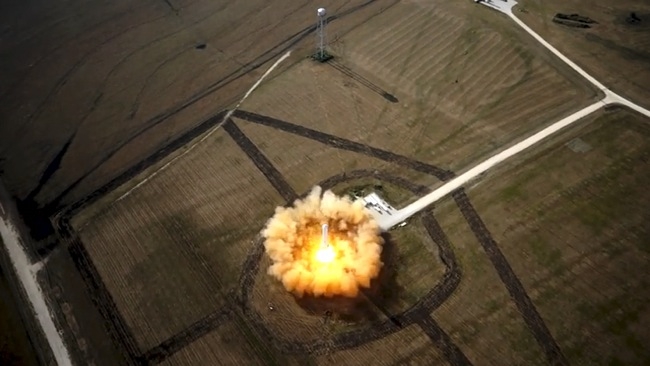 When we saw this shot we thought it must be CGI. The thing is, how do you get a high quality camera 500 m above a rocket launch pad, and keep it there throughout the launch. This is the sort of thing you'd normally have to do, painstakingly, with animation and compositing

But this is real. We don't have any real details except that this is was taken by a Hexacopter at the recent launch of the SpaceX Grashopper spacecraft, which is designed to take off and land at exactly the same spot - something of a remarkable achievement in itself.

Here's what SpaceX had to say about it on their YouTube channel:

On June 14, SpaceX's Grasshopper flew 325 m (1066 feet)--higher than Manhattan's Chrysler Building--before smoothly landing back on the pad. For the first time in this test, Grasshopper made use of its full navigation sensor suite with the F9-R closed loop control flight algorithms to accomplish a precision landing. Most rockets are equipped with sensors to determine position, but these sensors are generally not accurate enough to accomplish the type of precision landing necessary with Grasshopper.

Previous Grasshopper tests relied on the other rocket sensors but for this test, an additional, higher accuracy sensor was in the control loop. In other words, SpaceX was directly controlling the vehicle based on new sensor readings, adding a new level of accuracy in sensing the distance between Grasshopper and the ground, enabling a more precise landing.

Grasshopper is a 10-story Vertical Takeoff Vertical Landing (VTVL) vehicle designed to test the technologies needed to return a rocket back to Earth intact. While most rockets are designed to burn up on atmosphere reentry, SpaceX rockets are being designed not only to withstand reentry, but also to return to the launch pad for a vertical landing. The Grasshopper VTVL vehicle represents a critical step towards this goal.