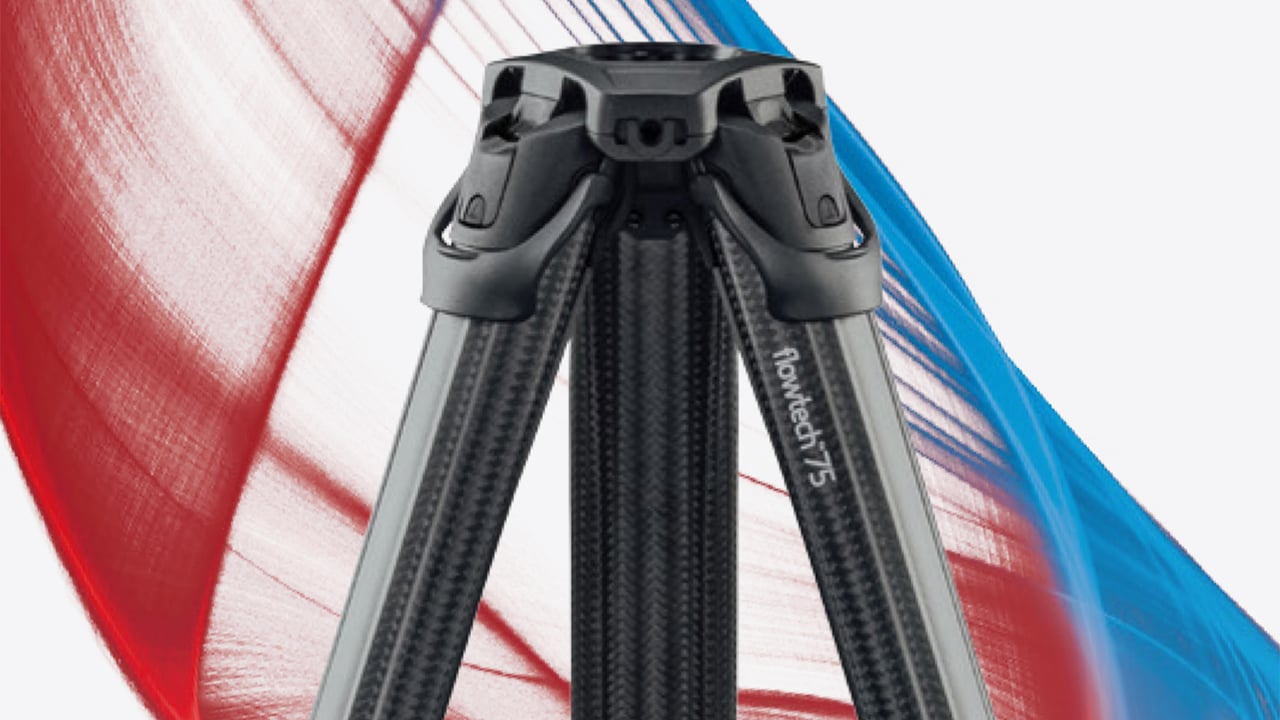 Review: The lowly tripod is often forgotten amongst the excitement of new camera releases. But Vinten has managed to design a tripod with truly revolutionary features in the form of its Flowtech range. Phil Rhodes takes a detailed look at this most important of gear pieces.

A good-quality tripod can easily last someone a career. Like lights, they're largely independent of the pursuit of more resolution, 3D, bigger sensors, higher frame rates, or HDR. As such, manufacturers have often struggled to give people a good enough reason to upgrade, but Vinten's Flowtech 75 tripod has a few very persuasive tricks up its sleeve. 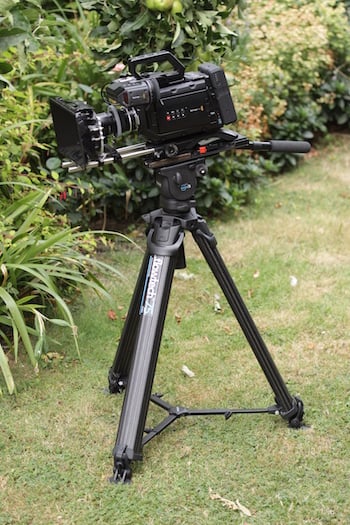 The idea of a double-extension tripod with a single control to latch the legs has been a holy grail of tripod design for some time. Dividing the legs into three sections makes the tripod easier to store and achieves a lower minimum height, but historically required six controls, distributed all over the legs, to lock and unlock all the extensions. The Flowtech design allows users to lock and unlock both extensions from one latch which remains at the top of each leg. That's something that tripod manufacturers have been approaching for years, yielding useful options such as Cartoni's Smart Deployment Series and the Sachtler Speed Lock system, though neither leaves the latches up by the head like the Flowtech. 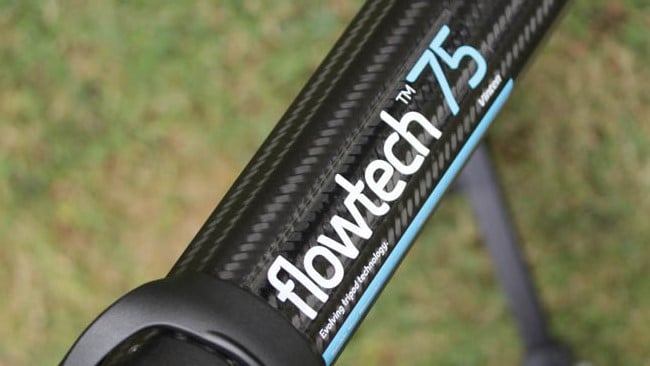 Flowtech 75 legs at minimum extension. The paddle latch is visible at the top left

The device under review is the Flowtech 75, which suits heads with a 75mm bowl and sells for a fraction less than £1000 in the UK. The legs are shown with the Vision Blue3 pan and tilt head, which goes for about the same price and includes the continuously variable counterbalance system Vinten call “perfect balance.” Flowtech is sold under both the Vinten and Sachtler brands, as both are now owned by Vitec; Sachtler latches are red, but the tripod is otherwise identical other than the insignia. On paper, the combination of Flowtech and Vision Blue3 suits cameras from 3 to 5kg (11lb), though camera support equipment, from any manufacturer, is easier to use when underloaded than overloaded and it's better to aim high. The limiting factor is the head, not the legs, which are rated to 20kg on their own. A larger head such as the Vision Blue5 would handle anything between 5.8 and 12kg on the same legs. 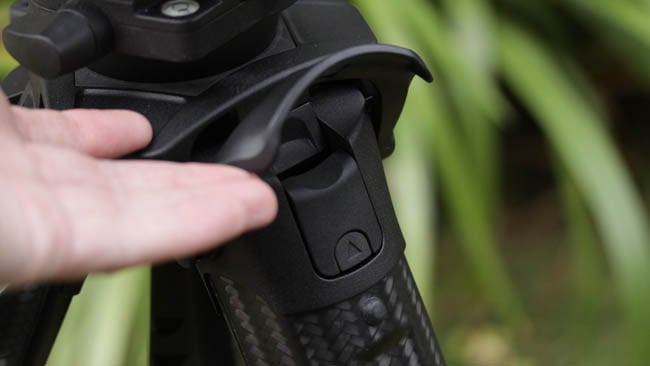 Latches can be flipped up with a fingertip

These weight ranges cover most of the cameras used for news and documentary, and that's where the Flowtech system really shines. While the single latch design is the headline feature, the rest of the design also seems to have been drawn up by someone with a lot of experience carrying tripods around. Moulded in carbon fibre, the telescoping leg sections create a tidy, almost circular profile when folded, and are very easy to shoulder. They also unfold easily, being retained by magnets near the feet and not the traditional latch or strap. The carbon sections are manufactured using a novel process that the company likes to keep under wraps and keep weight, for the legs alone, down to a mere 2.9kg. 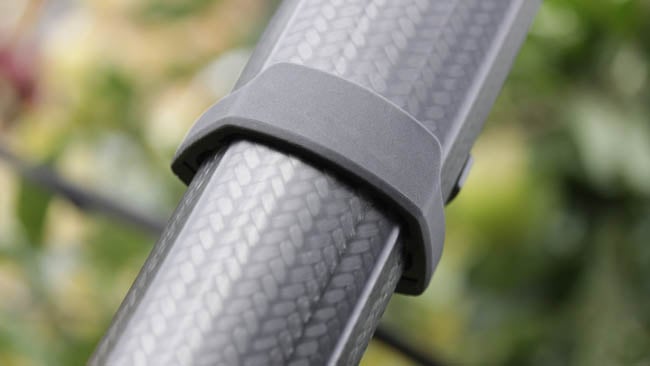 The rubber feet and mid-level will be standard equipment for most people, increasing weight by half a kilo. The spreader uses three straightforward pushbutton release latches. Without it, the tripod can achieve a minimum height of 260mm, up to 1570mm with the spreader in place. There's also a latch designed to limit the angle at which the legs can hinge away from the head, limiting the potential for an ungainly collapse when operating without the spreader, with the the legs spread far out at low head heights.

The spreader clips in with simple push button latches

The Flowtech design lives and dies on the success of the per-leg latching system, which involves a fair amount of internal mechanism. This is discussed in a useful series of online videos demonstrating maintenance procedures which are probably aimed at the technical departments in rental houses, but the decision to make the basic setup technique public is a welcome vote of confidence in the customer. Each leg is individually specified not to slip below a load of 20kg, and it's a pleasure to report that Vinten's new design holds up well. There's very little awkward binding when deploying the tripod, and no hint of slip or unsteadiness once the latches are done up, snapping into place with a nice positive click. There's even a little rubber buffer to stop the latch hitting the carbon fibre. 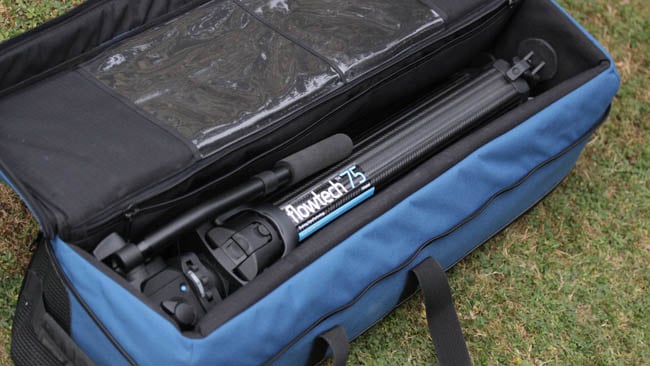 As a double-extension tripod, the Flowtech 75 collapses down to a very small package when stowed

If it wasn't already clear, the Flowtech 75 legs are very good, with novel engineering providing genuinely useful features. They're not intended to replace a full-size field production tripod such as those in Vinten's Pozi-Loc range, which are much more conventional and which you'll need if you're an Amira owner, but if you need something to carry up mountains with an Ursa Mini it'll work beautifully.