Has the trusty MKH 416 finally met its match with the Deity S-Mic 2 shotgun microphone?

Review: Deity has upgraded it's shotgun mic in the form of the S-Mic 2, and it could give the long time market leader a good run for its money.

In a market as established as that of microphones, it's hard to make a splash. Back when the current Deity company was part of well-known lighting manufacturer Aputure, they released their first microphone at an attractive price, presumably in pursuit of such a splash. The original Deity is already a creditable shotgun mic, so the prospect of an upgraded version is attractive. 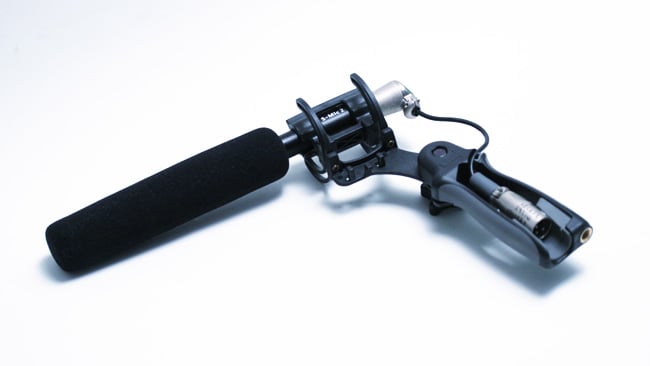 The foam cover and grip are supplied (the short XLR link is third-party). A furry windjammer is available for a small additional charge

The physical resemblance to the Sennheiser MKH 416, which is as close to a world standard shotgun mic as we're likely to get, invites direct comparisons now, just as it did then. We should be clear, though, that comparing mics is like comparing fine wines. It's highly imprecise and a matter of opinion, and boy, are there ever a lot of opinions when it comes to microphones. Still, the 416 was an obvious comparison and one of which the company seems very much aware because they've now released the S-Mic 2 with some changes which seem intended to make the new product compete directly with everyone's favourite Sennheiser. 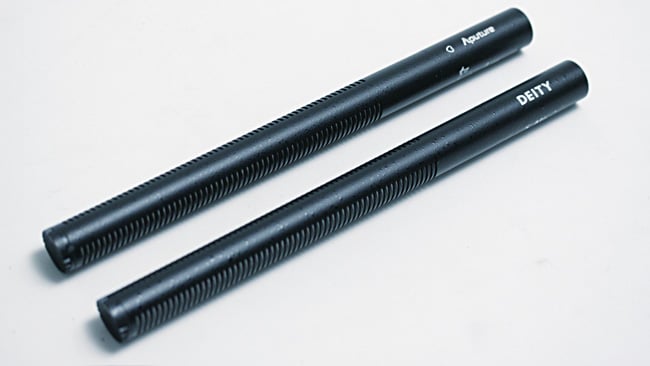 Top - the original Deity mic. Bottom - the S-Mic 2. Or is it the other way around (the new one's at the bottom)?

The original microphone suffered perhaps a touch more off-axis colouration than either the 416 or the new S-Mic 2. The idea here is that a shotgun mic is selective, reducing the volume of things it isn't pointed at without affecting any other aspect of things it isn't pointed at. Things off the mic's axis should be quieter, but not, say, lacking in bass. Effectively all mics have at least some alteration of tone in off-axis sounds, because of the simple physics involved; different frequencies of sound are more likely to make it through various configurations of tubes and baffles, which is how a shotgun mic generally works. 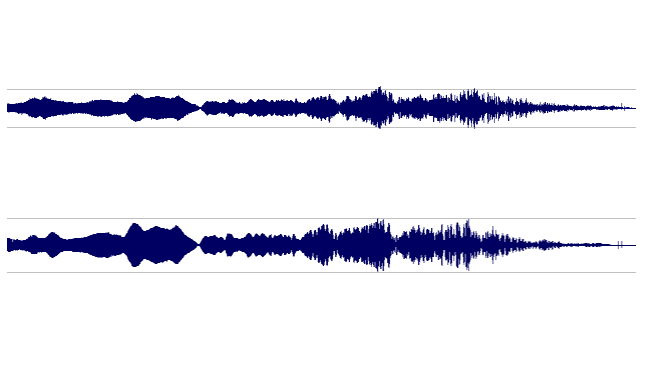 This is a frequency sweep, though it is completely distorted by the room. Top, the original Deity. Bottom, the S-mic 2 has higher gain and more bass

This is one of those things that'll always be a compromise between selectivity, colouration and a few other characteristics, but the good news is that the S-Mic 2 is noticeably better than the first edition, which could go a bit toppy when not quite pointed at the subject. There's also more gain. The company tells us this is due to a completely new capsule and electronics, not just having wound up the proverbial volume. A coarse test – above – of frequency response shows the higher gain of the new mic and the better off-axis bass response. These waveforms were recorded with the microphone at about 75 degrees to the speaker. It's far from a pretty chart, of course – this was done in a workshop and the frequency dependent effects of the room are huge, but it's OK as a purely comparative evaluation.

One or the other is the new one. Meet the new mic, quite different from the old mic. But looks similar

Really objective tests of microphones require more laboratory equipment and more time than is easily available but the improved off-axis bass response is obvious. It also sounds, subjectively, as if the signal to noise ratio is noticeably better on the S-Mic 2. We're also told that the new setup has more unit-to-unit and batch-to-batch consistency so that setups with more than one mic are less likely to have matching problems.

So, it has lower off-axis colouration, more signal and less noise; therefore it's certainly better than the original Deity. It certainly sounds an awful lot like a 416 in side-by-side comparisons, to the point where it's pretty clearly been done deliberately. Deity says that the only errors in the matched frequency response are at 50Hz and 15KHz, the first of which can make the S-Mic 2 sound slightly flatter in the bass range but is easily correctable if that's your desire. So, can we reasonably start replacing the 416 with something that costs around a third as much? 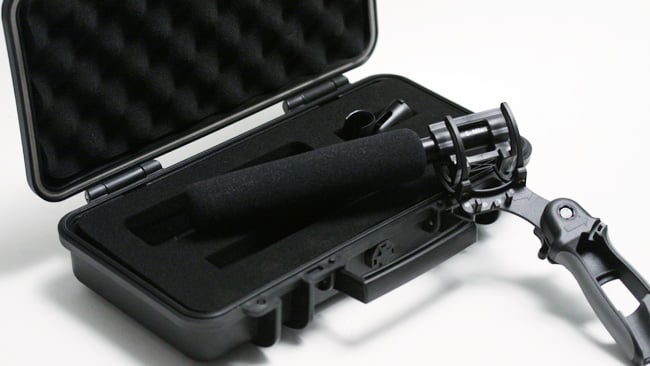 The S-mic 2 is supplied in a small hard case, though for most location people that'll probably just be the shipping container

Well, technically, maybe. The company says that the pickup pattern has been deliberately made slightly wider than the 416 to make it easier to boom two people or a sit-down interviewee who's rocking back and forth (like they do). The usefulness of that is entirely a matter of opinion. Brand names are also a matter of opinion, of course, but if Deity keeps shipping products like this, then public opinion is likely to sway in its favour.

The S-Mic 2 sells for $359 in the US, or $429 with the location kit, which includes a foam windscreen and pistol grip shock-mount.