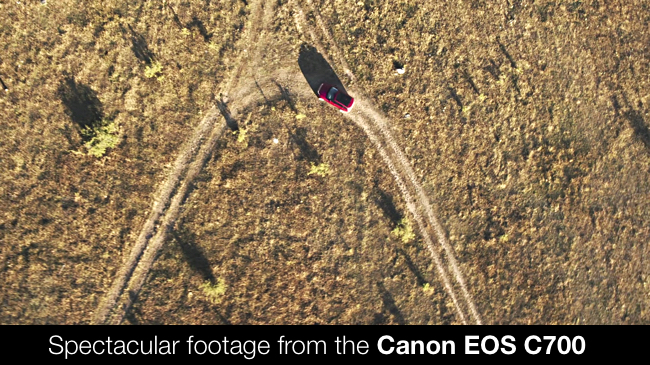 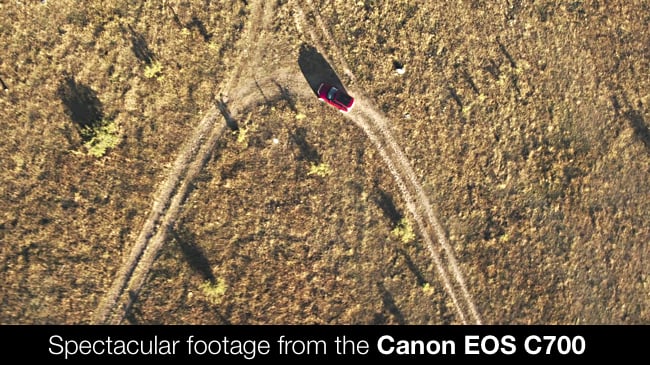 The EOS C700 continues to impress

The EOS C700 is Canon's no-compromise, high-end, cinematography camera. Here's some of the first available footage from it, shot by Brett Danton, in a spectacular fashion. Australian sun, luxury cars, shot from a speeding helicopter. What's not to like?

A few weeks ago we brought you Brett Danton's first impressions of the Canon C700. Brett is well known for his spectacular and natural-looking cinematography and today he's given us the finished, graded clips, which are used in an Australian commercial for Land Rover.

I directed the three clips using the EOS C700 in January this year, all on the same day. I used the Shot Over F1 gimbal system and some shots were hand held.

It was collaboration of clients. The first aim was to shoot 2 commercials for the Brumbies rugby team and Land Rover Australia who support them. The second was to shoot additional footage to see what the new EOS C700 camera was capable of having been offered its use by Canon Australia. I'm always looking to push imagery!

We shot with all camera settings as they were out of the box, just the same as you would if hired from a rental company. We had a traditional post workflow, backing up to portable thunderbolt drives and editing in Premiere CC 2017. We used XF-AVC at the time as the RAW recorder was not available, and graded in Base Light at GPS Studios in London. Everything was shot with 180 shutter @ 25fps, 800ISO using internal ND filters. The conditions were harsh, hot and dusty, starting early in the morning going right through the day, we used LOG3, which at no time did we see any highlight clipping on the waveform, LOG2 was not chosen, although it uses the 15 stops we did not need to see into the shadows blacks that much.

The camera used was the non Global Shutter version and if you can even see rolling shutter in the shots from this camera I would be amazed. I think with the speed of the processors and image acquisition from the chip, rolling shutter would just not be something you would see. Personally, I would rather have the 15 stops - along with the autofocus option on Canon glass if ever needed, even on the cine primes the focus assist proved useful on this shoot.

Canon colour space is a clear winer, it to me has a film essence look and feel, with natural, realistic colours - not a harsh "electronic" feel.

Ashleigh Carter DOP commented that the viewfinder is the best to date on any camera, this when working under the harsh, bright Australian sun.

This camera feels bullet proof. In one day we shot 3 spots, taking the camera from chopper to hand held and through all lighting conditions and it did not miss a beat. The cheese plates top and bottom make rigging easy unlike its predecessor and rock solid when mounted, something required for helicopter gimbal work.

I would clearly like to say that no imagery witchcraft has been used to produce these pictures, they are available light in harsh sun on a blinding Australian day, at one stage a small amount of fill was used from a reflector but only at midday. The camera was delivered 3 days prior to Christmas and we had one day to play before shooting. The shots were graded, as is typical with an advertising shoot, but with so many camera image options and recording options the image with only a LUT still looked amazing.

A few days ago I did get to play with the Codex recorder in RAW and we shot in studio on a crane, the RAW is a new recipe and we on set monitored in 4k, the image looked amazing and was the fastest RAW footage I have graded when back in post.

A couple of comments from the post house and creative director on what they thought as impartial camera users:

Matt Johnson from SPARK44 Sydney: “When I saw the rushes of the car coming up the hill at dawn, I knew we had something pretty good. The images that were captured all through the day didn’t disappoint"

Ben Rogers, Colourist, GPS London: “I thoroughly enjoyed grading the Range Rover footage. It had great latitude and a low amount of noise. It also helped that it was beautifully shot!

“It held the information particularly well with the demanding landscape and close up requirements. It was versatile with a good depth and it was easily manipulated.

“I used a number of curves to take full advantage of the footage's latitude. This allowed me to create great depth, but still retain the highlight and lowlight details.”