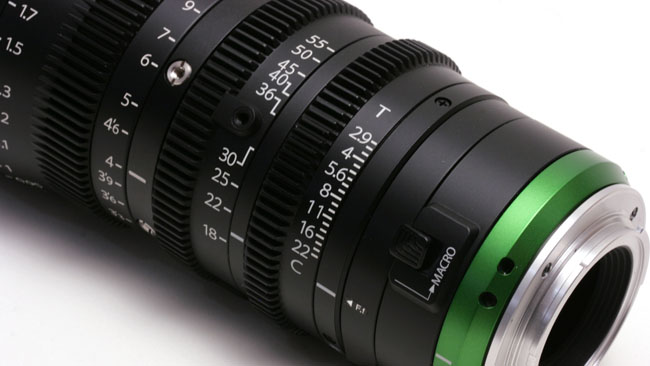 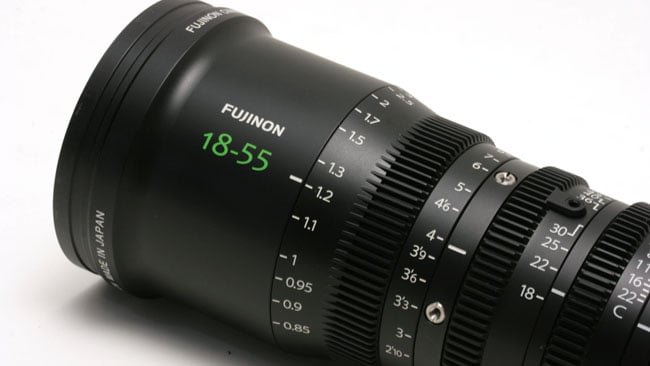 RedShark Review: Short zooms often cover the 18 to 55mm range; whether they're intended for stills or motion picture use, they're workhorses. So, Fujinon’s release of the E-mount MK 18-55mm lens for cameras with Super-35mm sensors is going to be a good fit for a lot of people.

Short zooms often cover the 18 to 55mm range, whether they're intended for stills or motion picture use. It's a useful range for people who spend a lot of time working inside buildings, as the wide end is wide enough to cover cramped interiors, while the maximum telephoto is suitable for sit-down interviews or other subjects that are the broad equivalent of portraiture. Almost all productions will eventually need more than 55mm worth of reach of course, but there's a reason why practically every lens manufacturer which makes short zooms includes one in this range — often with these exact numbers: they're workhorses.

Combine this with the keen recent interest in zooms for cameras with Super-35mm sensors and Fujinon's release of an 18-55mm lens is no surprise. This is especially true in the context of a longer zoom — clearly intended to be a sister product — which is to launch later in the year. The company has, of course, a huge profile in zoom lenses for both broadcast TV and Super-35mm cameras with their well-known ZK4.7x19 and the more recent XK6x20. These lenses, however, despite their excellence, represent more weight, more bulk and frankly more money than really works for owners of cameras such as the FS7. The 18-55mm T2.9 is intended to list for “under US$4,000,” putting it nicely below the cost of the Canon 18-80mm and its accompanying handgrip, which covers a slightly larger range but at T4.4 is noticeably slower. 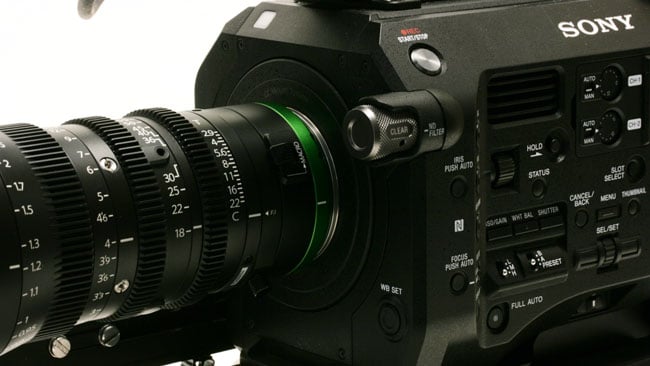 The featureset hovers somewhere between that of a pure cinema lens and a TV zoom, and that's very appropriate. Focus rotation is more than 180 degrees and that won't be adored by every documentarian, but, equally so, it isn't as far as the 270-plus degrees of dedicated cinema lenses and is workable in a variety of scenarios. There is an adjustable back focus and a macro function just as on a broadcast lens, and the overall size and diameter are broadly comparable to a TV zoom. The filter threads are 82mm, meaning that the front element (which is static, with all focus and zoom mechanics internal) will fit comfortably behind a lightweight, 4x4 matte box, assuming the matte box itself can keep out of the way of that 18mm wide end.

The layout is otherwise oriented toward cinema style operation, with the iris, focus, and zoom rings geared for cinema-type lens controls. The focus rotation ends a little below 2'10”, with the markings printed (not engraved) and with proper index marks for the focus, although there is some question over how precise they can be on a lens with variable back focus. There is no TV-style handgrip, which might be a worthwhile optional accessory in future. The grips on the FS7 are reminiscent of historical 16mm practice — which is clearly the intention — but they're also more offset from the centre of gravity than a built-in grip would be. They make it hard to put the camera down on a flat surface. Since the gear positions are to be consistent between this lens and the longer focal length option, one grip design could accommodate both. At the moment, however, there are no electronic systems on the lens at all, which means there's no viewfinder readout of the iris setting, for instance, but it's also one less thing to break. 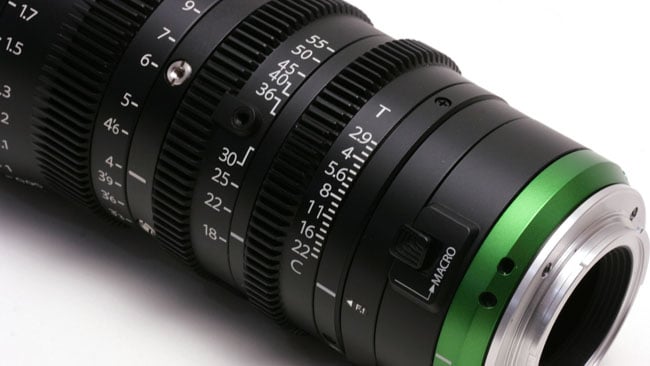 Sony supplied a complete FS7 outfit for use with the new lens, including the shoulder kit with its VCT-14U quick-release compatibility and 15mm rod mounts, and the XDCA-FS7 add-on module. This facilitates V-mount batteries, as well as things like the AC-DN10 V-mount power supply and battery charger. It's possible to mount a battery on the back of the charger, which will then be charged when mains is available, or run the camera when it isn't. With all this, the FS7 becomes a well-balanced and very convenient news or documentary camera.

Currently for Sony E-mount only

It's good to bear in mind that Fujinon's new zoom is currently suitable only for cameras by Sony because it's available only in E-mount. This is a natural consequence of the engineering required to fit a reasonably fast 3:1 zoom into a package of this size, weight and cost — putting the rear elements of the lens physically very close to the image sensor makes certain things easier. It's apparently possible that the lens could be made available in micro four-thirds mount as well, but there are no immediate plans to do so. 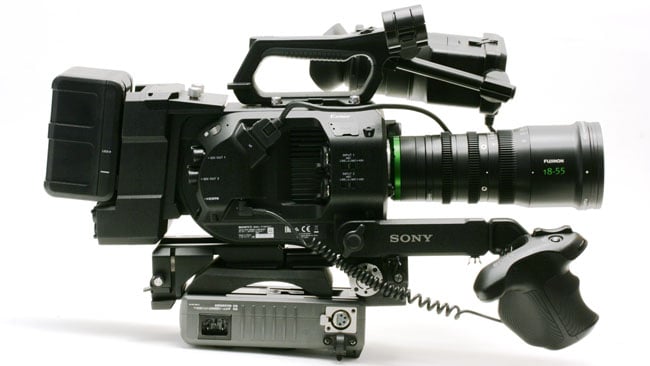 The new zoom pairs well with Sony's FS7. With the AC-DN10 mains power pack, shown beneath the camera, and a battery stacked, balance is impeccable

Putting something like the XK6x20 on this setup would cover the whole range in just one lens but, apart from cost, would also make it tremendously front-heavy and difficult to operate from the shoulder. The new 18-55 is a comparative featherweight and works very nicely. Other options, such as an adapted 2/3” ENG zoom, might compete on small size and light weight and would probably exceed the zoom range. However, it would either end up rather slow (above f/4) due to the necessary image enlargement or would preclude 4K shooting by requiring a centre-crop sensor mode to be used. The biggest concern with that arrangement, though, is image quality: no adapted ENG lens will match the capability of the new 18-55. 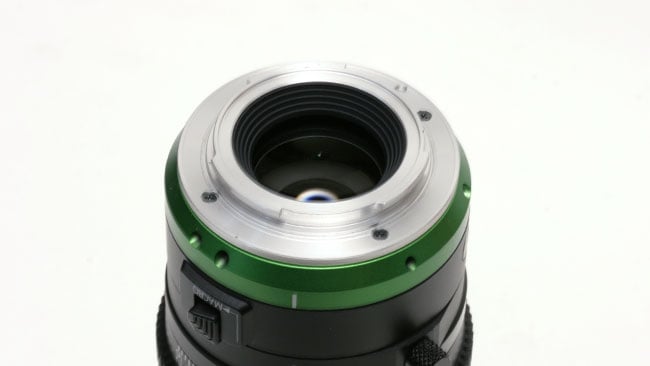 The shallow E-mount is convenient from an engineering perspective, although it excludes non-Sony owners

The most difficult conditions for a lens involve minimum aperture, maximum focal length, and high contrast, ideally to the point of overexposure. Under these extreme conditions, a tiny amount of red-blue chromatic aberration is visible, but it's very minimal and no worse than comparable lenses. It's only really visible in the corners and around areas of extreme overexposure, as when shooting directly into light sources. Breathing, at any focal length, is very low, and there is very little change in shading as focal length varies over the minimum aperture. Colour is, if anything, very slightly, pleasantly warm and the purplish flares are well-controlled at all focal lengths.

Overall, optical performance is good or very good as it should be given the modest 3:1 zoom range. The minimum aperture can be used without reservation. The purpose of a low-ratio zoom is to maximise optical quality, and that approach plays out nicely here. As a potential purchase, most people will consider the 18-55 as part of a set, since 55mm is not long enough to be the only lens in most camera packages. Assuming the longer zoom is similar in price, the set of two Fujinon zooms would be priced directly between prominent Canon and Zeiss offerings. Between the two lenses, Fujinon would have a useful alternative to both and significantly more performance than either.