Panasonic tries a new approach with their actioncam 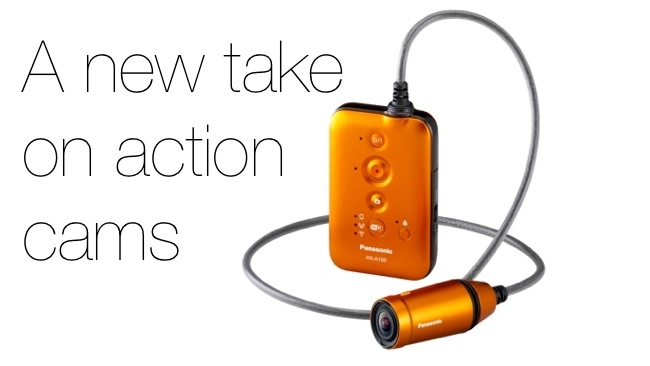 Yet another entrant in the crowded action camera field, the Panasonic HX-A100 sets itself apart by being wearable, right out of the box

The end of 2012 saw several cameras vying for the action crown. GoPro launched the Hero3, featuring 4K recording, while maintaining earlier models to comprise a wide available product range. Sony premiered its Action Cam with 720p 120fps recording and a bevy of included accessories, and currently offers a model with built-in wi-fi. JVC’s ADIXXION also sports built-in wi-fi and LCD viewfinder, and the most rugged body of its class.

When you look at the spec list of Panasonic’s HX-A100, as compared to its competition, nothing stands out as unique. If anything, the Panny apes many of the other action cams’ best features, which isn’t a bad thing. For $299.99, you get HD recording built-in wi-fi for instant video streaming, 720p 120fps, selectable field of view, image stabilization and leveling, and more. It lacks a dedicated LCD viewfinder, however, which is somewhat mitigated by wireless integration with a mobile device, which can act as a LiveView, record trigger, and playback viewer. As of yet, there is no add-on LCD accessory available for the HX-A100, although that may change.

But, maybe not. A bulky LCD would defeat the true purpose of this new action camera. Panasonic has opted for a rethink of the action form factor. Instead of one self contained unit, the HX-A100’s camera is tethered via wire to a small record remote, which also houses the microSD card and the non-optic guts of the capture system. Typically, the ‘remote’ would be fixed to the wearer by way of an armband, much like an iPod mini. To complete the package, the Panny comes with an innovative earpiece mount, allowing users to get their POV-on without the need for a helmet or headband, making the HX-A100 a wearable camera straight from the box.

Sure, you can also purchase a helmet mount for the Panny, but this camera should appeal to anyone who wants a super-lightweight POV camera for activities that typically don’t require such headgear. And, its built-in wi-fi and Ustream capabilities make it an ideal streaming webcam that can move in on the action, whatever the action.

Are you intrigued by the Panasonic HX-A100 POV camera? Do any potential uses spring to mind? (Let us know in the comments, but keep it PG-13 please!)