Repurposing still lenses for the cinema 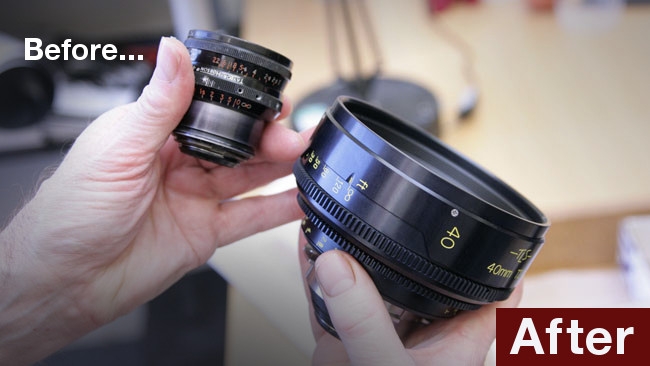 Rehousing classic lenses, before and after.

There aren't enough lenses in the world. As evidence of this, take the fact that anyone in his-or-her right mind feels the need to shoot broadcast television productions on awful, plasticky zooms intended for holiday snaps on cheap DSLRs.

There's a subtlety to be aware of here. A lot of lenses intended for stills use are actually pretty good, optically speaking. This is especially the case with primes, which enjoy exactly the same benefits  as cine primes: compact dimensions, a wide maximum aperture and good optical performance at a reasonably restrained price. It's just that they're often a bit of a pain to use. There must, one would have thought, be a solution – and there is. Its name is True Lens Services, based near Leicester, and we visited to have a look at what they're up to. 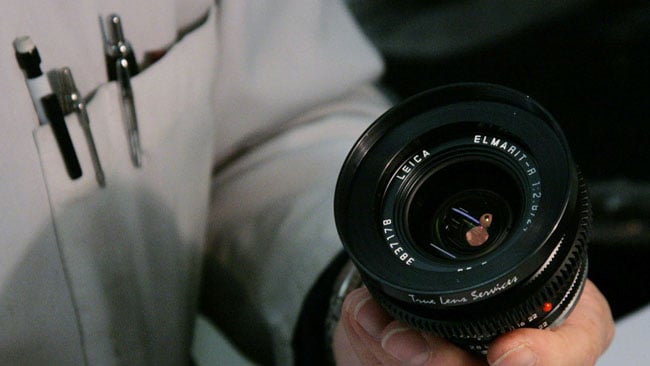 The image above shows a 24mm f/2.8 Leica R, a fine wideish-angle prime widely used in both stills and motion picture photography. It doesn't look quite like a 24mm Leica usually does, though, because it's been modified by the engineers at TLS, who've fitted a geared interface to the focus ring, a nicely-manufactured step ring to the front and (though this is naturally invisible) removed the click stops on the iris. While the resulting set still won't have the completely consistent size and focus gearing positions of the best cine lenses, this procedure, which TLS calls Cine Shot, makes the stills-oriented Leica much more suitable for movie work by removing the need for awkward solutions for interfacing remote or mechanical follow focus and keeping the front, where lens meets mattebox, the same diameter.

All of these things are nice. This, however, is even nicer: 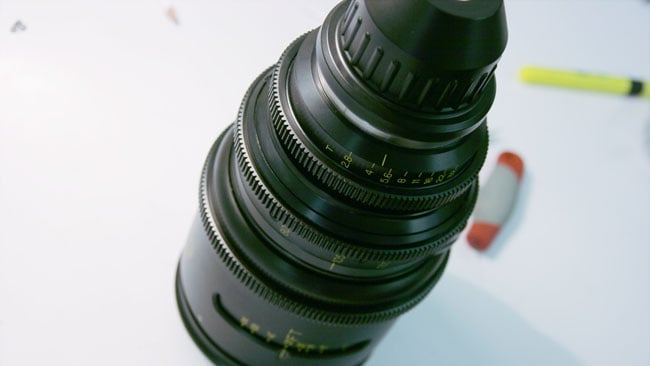 TLS's flagship service is undoubtedly the complete rehousing of both stills and cinema lenses. The device shown above is a PL-mount rebuild of the Nikon 80-200mm T/2.8 which TLS calls the Morpheus Zoom, the first of which was put together for The Bourne Ultimatum and then went into series production. At £6500, it's hardly a snip, but for a fast, high-quality 2.5:1 zoom, the cost is highly competitive with other things of similar capability. Reportedly, TLS did approach Nikon about purchasing the required parts directly from them, which would seem to have made a lot of sense, though Nikon declined and these lenses are based on parts from retail examples of Nikon's product. 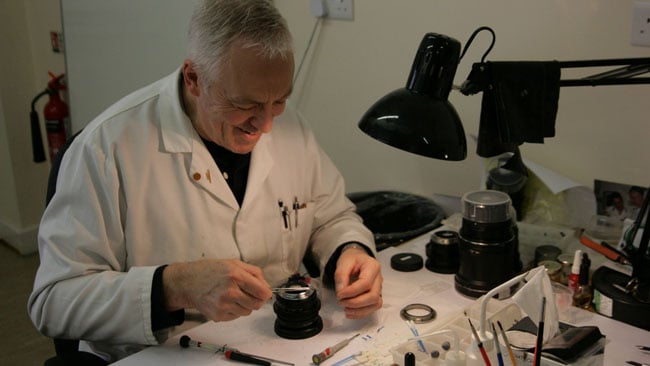 Perhaps the best-known of TLS's reworkings is its complete rehousings of preexisting glass in a more modern format, particularly the Cooke Speed Panchro series. The Speed Panchros are the descendants of an ancient design originally intended for a wide maximum aperture, the better to facilitate shooting under the low-noise, non-arc light sources that became necessary at the dawn of sound. The sets that TLS currently work with aren't that old, of course, instead dating from the days of the Arri IIC (from the mid-60s) and its turreted optics. Naturally, this raises questions over optical quality.

Don't more modern designs have better performance? Well, yes, for some value of better. The Speed Panchro series more-or-less objectifies the modern interest in older lenses, which may produce mediocre performance on a test chart but which have become fashionable as a way to take what's often rather obliquely referred to as "the edge" off modern, high-resolution digital camera systems. This is, of course, a case of beauty being in the eye of the beholder.

Lab test performance problems haven't stopped the average eBay price of a decades-old Speed Panchro from inflating extraordinarily over the last decade or so. The tiny Speed Panchro lenses aren't particularly conveniently laid-out for modern filmmaking; TLS's modifications generally tend toward making them larger and easier to handle. There are essentially three variations on the style of metalwork that TLS puts around Cooke's glass, each with clear, modern markings. The results are, within each variation, consistent in size and weight and the position of the focus and iris controls. If you're into a more organic variation on the Cooke Look, it's a nice solution, although again priced very much for the high-end market. 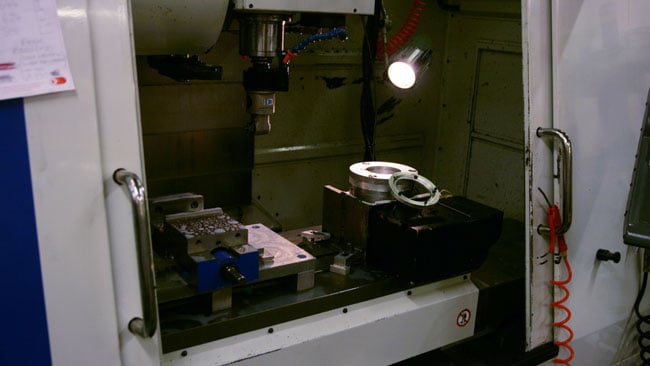 Of all these things, the offering with perhaps the broadest appeal is Cine Shot, the most straightforward approach to making stills lenses more usable. Adding proper focus gearing to existing glass is a very common requirement in the current world of cheap cameras and expensive lenses (and it's easy to find a thousand bad ways to do it that will fall apart embarrassingly). When things like the pre-AF Nikon Ai and Ais series are increasingly used for surprisingly prominent work, simply because of collapsing budgets, this sort of service becomes evermore important. Do this enough and we might even be able to establish the look of 70s stills lenses as desirable; let's see if we can make it happen, eh? While True Lens's service may easily represent a doubling of the cost of a stills lens, it's a nice approach that's still a bit cheaper than going to someone like Veydra – and Nikon mounts will adapt to more-or-less anything. 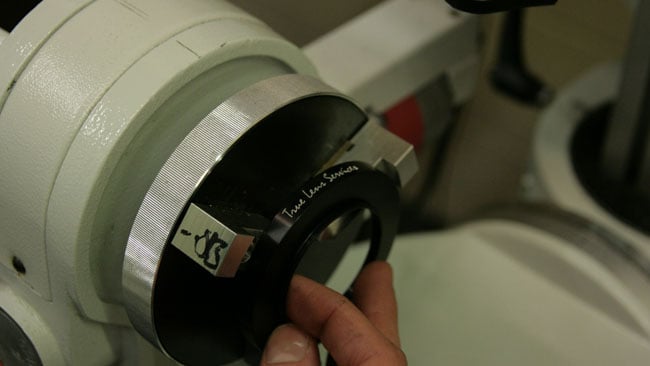 Answer to a common need?

One other slightly dangerous thought that also arises from all this is the screaming need for a shortish zoom to suit all the world's new low-cost documentary cameras, from the Ursa Mini to FS7 and all their competitors. The £6500 cost of the Morpheus zoom – which is itself too long in focal length for this purpose, but might stand as a broad example – is an enticing hint at what might be achieved by rehousing a zoom in the 18-105mm range, as is made by various manufacturers. This might be particularly entertaining were it to include something equivalent to a speed booster, offering a choice between wide effective aperture at wide angle or telephoto performance at the cost of some light. Were this to be done, and though this is entirely your correspondent's fantasy, a company such as TLS could certainly do it. Whether that's a market the company would be interested in is another thing – it's a small, boutique place with a staff of specialists serving a cautious and exclusive clientele and the mass market of Ursa owners might not beckon too enticingly.

Still, it's an interesting idea. In a broader sense, the option of repurposing good stills lenses will remain very tempting to those of us who find ourselves, all too often, grappling with the rattly, plasticky kit lens from a low-end DSLR.