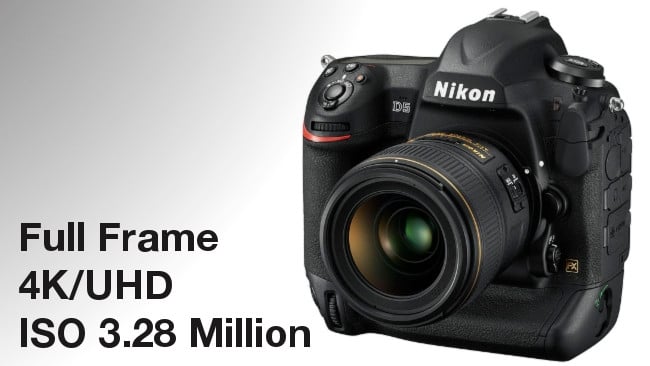 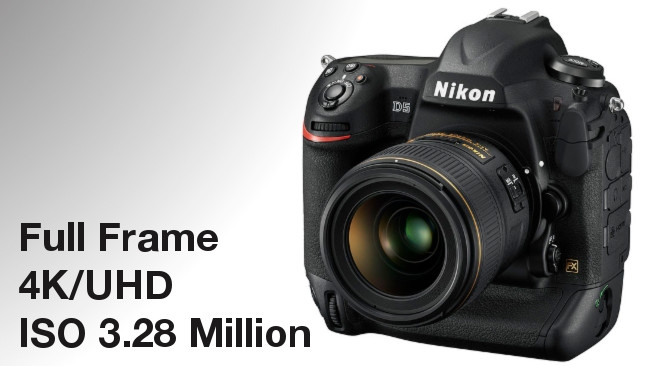 The rumors leading up to CES have been proven largely true, with the announcement of Nikon's new 4K shooting, low-light full-frame DSLR.

It seems, year after year, there are more product announcements coming out of CES that may be of interest to film professionals. Some it that is due to the ever-expanding drone photography market, but there's still space for a new camera announcement (or two) to make some serious noise.

This year, it's Nikon's turn, with the introduction of its new flagship DSLR, the D5. Much rumored specs have proliferated over the past few months, but now the real deal arrives, confirming much of the advance information from sites like Nikon Rumors.

The D5 arrives as a full-frame 20.8 megapixel camera with a 153-point autofocus system (99 cross-type). There is a 3.2-inch lcd touchscreen in back (no articulation). But that doesn't begin to speak to its potential as a video shooter.

Nikon added 4K shooting to its flagship line, bestowing the D5 with 4K/UHD shooting (24, 25, 30 fps). Of course, as we've said before, adding 4K to a DSLR is no longer news. But the inclusion of high ISO settings (native: 102,400; expanded: a whopping 3.28 million) makes the D5 an intriguing option for some run-and-gun shooters and those who constantly find themselves shooting in available light...at night.

It remains to be seen just what ISO settings will be usable and, as always, that's a matter of taste.

Also of note - the camera will come in two varieties: one with two CF card slots, another with two XQD card slots, which is great for those that are sitting on a pile of either memory.

We'll continue our coverage of this camera in the coming days and give you our perspectives on this news.

Press Release after the break

Outperform, Outdo, Outlast: The D5 raises the bar for FX performance
The most powerful digital SLR flagship in the Nikon line-up leads the pack with unmatched speed and precision

TOKYO - Nikon Corporation today announces the new D5, a FX-format flagship digital SLR camera that challenges photographers to outperform their highest standards, and set new benchmarks for speed, accuracy and image quality. Expanding the possibilities of image capture for professional photographers, the new D5 places the needs of the professional at the centre of innovation with features that enable smooth and reliable responsiveness to a wide variety of scenes and subjects.

From the refined acquisition of subjects in motion, to 4K video in UHD, the D5 creates opportunities for dauntless photographers working in demanding shooting environments to push their gear to new limits. With a next generation AF system the intelligent and versatile tracking of moving subjects enables the richness and realism of every split-second moment to be captured. The D5 boasts a wide range of ISO sensitivity up to 102400, expandable to Hi 5 (ISO 3280000 equivalent) — the most expanded sensitivity range in Nikon history — for astronomical twilight with minimum illumination, capturing details and colors beyond the limits of the human eye.

"The Nikon D5 is not just about technical excellence, but the marriage of elegant technologies. Speed and refined image quality have never converged so extensively, making it truly the camera that the industry has been waiting for," said Tadashi Nakayama, Corporate Vice President, Sector Manager of Marketing Sector, Imaging Business Unit. "The D5 represents what we are trying to do for the entire digital SLR category: Bringing technologies together to meet and anticipate the demands of professional photographers, empowering them to push the boundaries of their craft," he continues.

The D5 enables the precise capture of subjects under the most demanding conditions with a new-generation 153-point AF system and a stable viewfinder image that makes tracking moving subjects easy, even during high-speed continuous shooting at approximately 12 fps*1, making the camera ideal for photojournalists capturing heart-racing sporting action and majestic animal migrations. Image quality is further enhanced by the pairing of the new Nikon FX-format CMOS sensor and the brand new EXPEED 5 image-processing engine, for the most vibrant, true-to-life colors and sumptuous details. Together with the highest standard ISO sensitivity in Nikon history, up to102400, photographers are liberated from the challenges of shooting in low-light environments whether covering evening events or shooting indoors. In another first for the FX-format range, the D5 takes movie-making to new cinematic heights with the ability to shoot in 4K UHD 2160/30p format, in-line with the increasing appetite from professionals for the production of high quality video content.

In addition, new and improved features and functions, such as a high-resolution touch screen LCD monitor, faster wired networks (via built-in Ethernet connector) and wireless networks*2, and double memory card slots*3 that use the same type of media, to simplify and speed up the professional photographer's workflow, while placing the D5 in the center of the connected ecosystem for visual communication.

Designed for the Field and the Studio

The camera's Advanced Scene Recognition System, which has adopted a new 180k-pixel RGB sensor, contributes to greater AF, AE, and AWB performance. This, along with a design that consumes less power and adoption of a highly precise and durable shutter, ensures durability, and gives photographers greater control over their gear as well as image quality. The D5 also completely integrates into any professional photographer's comprehensive ecosystem of Nikon accessories. Compatibility with the new Nikon Creative Lighting System functions, radio-controlled Advanced Wireless Lighting (AWL) and unified flash control, all work to ensure the production of superlative image quality and a seamless studio workflow*4

The entire AF system has been completely re-vamped with adoption of the Multi-CAM 20K autofocus sensor module. This sensor module offers 153 focus points (99 of which are cross-type sensors) for broad and dense coverage of the entire image area. The center focus point has a detection range beginning at an incredible -4 EV, and detection with other focus points begins at -3 EV*, enabling autofocusing even under extremely dim lighting, and with subjects exhibiting very low contrast. In addition, equipping the camera with a dedicated AF engine capable of high-speed calculation and collaboration with the 180K-pixel RGB sensor have ensured that extremely reliable AF performance is demonstrated with a variety of scenes.
*At ISO 100, 20 °C/68 °F

The D5 is capable of high-speed continuous shooting at approximately 12 fps*1 (w/ AF and AE tracking) in all image quality modes and at all ISO sensitivity settings. What's more, adoption of a new mirror drive mechanism achieves a more stable viewfinder image that makes continuous tracking of rapidly moving subjects easy, even with high-speed continuous shooting. Further, up to 200*2 12-bit lossless compressed RAW images can be captured with a single burst of continuous shooting.
*1Possible in Continuous high speed (CH) release mode with shutter speeds of 1/250 s or faster
*2When Lexar Professional 2933x XQD 2.0 memory cards are used

Collaboration between the new Nikon FX-format CMOS sensor and the new EXPEED 5 image-processing engine, both developed by Nikon, have enabled the highest standard ISO sensitivity in Nikon history, that of ISO 102400. High-sensitivity image quality at these never-before-seen levels achieves superior imaging quality, even within the high ISO 3200 to 12800 range often used with sports photography and the like. In addition, the image sensor's broad dynamic range enables rich and natural expression of tones for accurate reproduction of the finest details, even with extremely vivid subjects with which the expression of textures is especially difficult.

The D5 supports movie creation in 4K, which offers a resolution higher than HD or full-HD movies, an indispensable feature for professionals involved in film-making and video content creation. High-resolution 4K UHD (3840 x 2160)/30p, 25p, 24p movies can be recorded to a memory card inserted in the camera, or, with simultaneous HDMI output, they can be displayed on an external monitor or recorded as uncompressed video to an external recorder. With support for the maximum standard sensitivity of ISO 102400, as well as even higher sensitivity settings up to Hi 5 (equivalent to ISO 3280000), even movies recorded at these high sensitivities will exhibit superior picture quality. 4K UHD time-lapse movies can also be generated in-camera.

Adoption of a touch screen for the display monitor enables nimble confirmation and high-speed navigation of a large number of images using a frame advance bar, and supports an efficient workflow with text input and the like. The large 3.2-inch, approximately 2,359k-dot high-resolution monitor enables extremely clear display with live view photography, even when the display is enlarged, for fast focus confirmation.

Connect through wired and wireless networks

The communications system has been significantly improved to support communications twice as fast as with the D4S, with both wired networks using the Ethernet connector built into the D5, and wireless networks when the new Wireless Transmitter WT-6/A/B/C (available separately) is used with the D5.

Two versions of the D5 are available. Both are equipped with double memory card slots supporting a single media type; one XQD cards and one CompactFlash cards.

When connected to the D5, the high-speed transfer of image data to a computer*1 or an FTP server over a wireless network is possible. The maximum range is approximately 200 m*2. Communications are significantly faster with support for the new IEEE 802.11ac (2x2 VHT80) standard. Wireless control over the camera from a computer is also possible using Camera Control Pro 2 (available separately). A D5 to which a WT-6/A/B/C is connected may be used as a wireless LAN access point, and a direct connection to a computer or smartphone is also achievable.
*1The Wireless Transmitter Utility (available for download from Nikon's website) must be installed on the computer
*2With large antenna at wireless LAN access point. Range varies with signal strength and presence or absence of obstacles