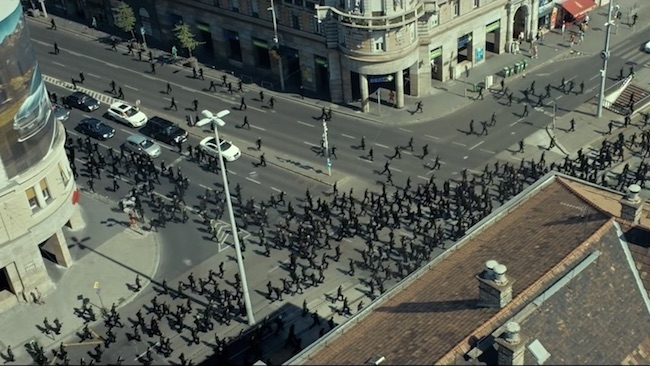 Still from 'Colorful Sensation in Black'

None more black: LG has recently released an eye-opening video illustrating the sort of performance difference you can get with the blacks in its OLED TV sets.

Over the past few years, 4K (ultra HD, 3840 x 2160 pixels) TVs have become more and more common in the average home. As the new technology becomes more and more affordable, it too becomes widespread. People have thus become more used to higher quality, clear sound, and a better overall viewing experience. The leap forward in TV technology makes older technology (such as CRT television) seem archaic. But it is through this archaic technology that we have seen many of the films and movies that we love. But what would the classic Tim Burton Batman films, or the original Star Wars trilogy look like in 4K? What if you’ve been seeing both of these series in sub-par quality all your life?

How would one describe the visuals in both Batman and Star Wars? In a word, dark. But whether it is Batman’s flowing black cape, or X-Wings flying toward the Death Star from their base on Yavin IV, the color black is extremely essential to both films. In fact, experts judge a TV’s ability to portray black as one of the major elements that make up their ratings of TV technology. Along with contrast ratio, black level is one of the two most important factors in picture quality in today’s TV technology market. One technology has been developed that doesn’t just render black well, it does it to perfection.

The Evolution of TV Display Technology: OLED Bursts onto the Scene

There have been four types of display technology in the history of television: Cathode ray tube (CRT), plasma, LCD, and OLED. Each time that the tech level increased, a massive increase in picture quality standards followed. Just as there was a huge gap in picture quality between CRT TV and plasma TVs, there’s an even larger gap between LCD and OLED TVs. What makes this possible is the fact that OLED needs no backlight. Each individual pixel can emit light on its own. This enables OLED to create the perfect shades of black, and an infinite contrast ratio, both of which would be impossible with a backlight. For these reasons, the shift to OLED TV will be just as revolutionary for display technology as the advent of the smartphone was for the mobile phone industry.

The difference of picture quality between LCD and OLED is evident in the picture above. The image on the left is what you would see on an LCD TV. The backlight panels bleed the image, creating light on pixels where there should be none. But OLED renders each pixel as bright or as dark as it should be, creating a strikingly crisp, smooth and clean picture that is both pleasantly rich, yet achieves a convincing realism with subtlety. You may say that the bad picture quality never took away your enjoyment of the film before, but after watching it on OLED you’ll never want to return to anything except OLED. Black level not only delivers black we enjoy in a dark movies, but does color vibrancy its justice

What We Can Expect from LG’s New OLED Display Technology

Think of an image of a night sky. How dark are the black parts of that black sky? If you are a city-dweller, it’s quite possible you don’t know how dark it should be. That’s because the night sky is polluted by artificial light sources. It is only when we travel away from civilization, out into the wilderness that we can truly appreciate the majesty of the night sky. With no light pollution, the blackness of space makes many more objects in the night sky visible.

The graphics below are intended to show the effects of light pollution. On the left side, we can easily see how city lights can make it harder to see the stars in the night sky. On the right, we can see that LG OLED TV is most similar to a night sky free of light pollution. An image of bright dots on a black background looks far more crisp and clear on an LG OLED TV, while it is rendered blurry and less visible on an LCD TV.

LG Electronics – the world’s leading OLED TV provider – recently released a short video clip that you can see below titled ‘Colorful Sensation in Black’. The clip depicts a number of men running and jumping while wearing black clothing, helping to emphasize the importance of effective black rendering in determining the accuracy of today’s advanced displays. In fact, a display’s precision in depicting pure black images is one of the major elements that home entertainment experts use when appraising TVs.