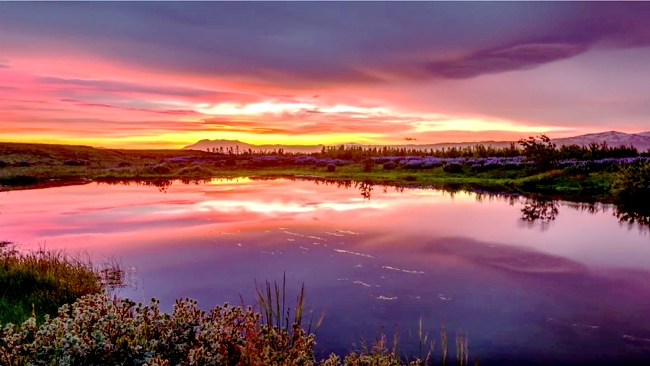 Iceland in all its multi-hued beauty

We make no apology for writing again about this very niche sub-genre, the Icelandic Timelapse. They kind-of justify themselves because the images are so beautiful and there are so many naturally lovely phenomena packed into a rocky island with only a third of a million inhabitants.

We don't know much about how this was made by Evosia Studios. It's presumably shot with a DSLR - because some shots were made, apparently in 7K! You can see it in 4K in the YouTube URL below.

There are some more details in Evosia Studios' description...

The light during midnight sun is a surreal and unforgettable experience. Hues of pinks, purples, reds and oranges that you may be lucky to see for a few minutes during a normal sunrise/sunset can explode for hours in an epic display of nature's masterful artistry.

Shot over two weeks from late June through early July in Iceland, finding the best spots to experience these conditions was not easy. We had to navigate Iceland's fickle weather.

The southern half of the island was storming most of the time.

Knowledge of the island's various micro climates and scenic locations were important in figuring out where to go for any given night. So was staying mobile and keeping all options open. Each day was a new and unexpected adventure.

Over the course of the trip, we covered most of Iceland's varied landscapes, traveling a complete loop on the ring road as well as spending time in the central highlands in the middle of the island.

You'll see scenes from Snaefellsnes peninsula in the west and various mountains and coastal areas in the north, to the fjords in the east and the Vatnajökull glacier region in the south.

Perhaps the most unexpected of all was catching the large plumes of clouds being generated by the cooling lava from last year's volcanic eruption in Bárðarbunga.

In the end, the odyssey is about the journey and its experiences rather than about the destination.

Music is the song "Market" by Justin R Durban - justindurban.com

Join me for my next trip to Iceland! Or one of my other timelapse workshops. evosiastudios.com/workshops/