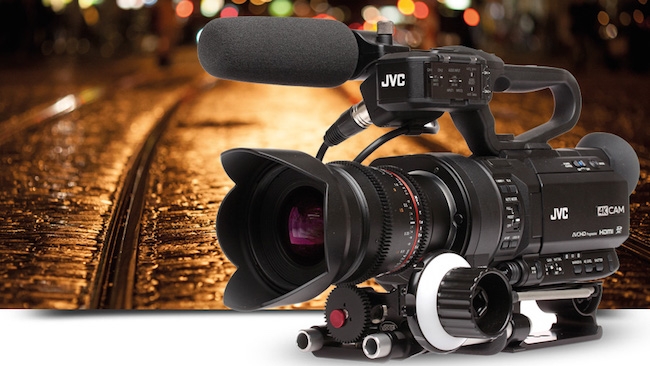 Available free in September, the v2.0 firmware for the camera certainly seems to be packed full of new capabilities.

The new JVC Log mode sees the GY-LS300 deliver wide latitude and high dynamic range – up to 800% according to the company – to rival the look of film, with the unit’s Super 35 CMOS sensor providing details within highlights and shadows. 4096 x 2160 Cinema 4K and 2048 x 1080 Cinema 2K recording modes at various framerates have also been added, along with a17:9 aspect ratio for digital cinema presentations, and ability to output a full HD signal via HDMI/SDI when in 4K recording mode for monitoring in HD.

Probably its best new trick though is Prime Zoom, which uses JVC’s Variable Scan Mapping technology. When used with a MFT prime lens, the image can be adjusted between the maximum scan area and minimum scan area using the camera’s zoom rocker, delivering a 2.3x maximum zoom for HD or 1.25x maximum zoom for 4K. Of course, it can also be used as a lens extender for actual zoom lenses.

Other new goodies include: a histogram display; a colour matrix adjustment; a new spot meter for setting exposure values; a black paint setting to precisely adjust colour temperature of master black; JVC LUT support via the Atomos Shogun external recorder; a 2:1/1:1 zoom for critical focus; and a 70Mbps recording mode that makes it possible to record 4K onto economical Class 10 SDHC/SDXC memory cards.

More details over the page.

JVCKENWOOD U.K. Ltd. today announced the Version 2.0 firmware upgrade for its GY-LS300 4KCAM handheld Super 35 camcorder. The upgrade adds a ‘JVC Log’ mode that practically duplicates the look of film, plus new Cinema 4K and Cinema 2K recording modes, a unique Prime Zoom feature that uses the camera’s innovative technology to allow zoom capabilities when using prime lenses, and a histogram. Free for all current owners, the upgrade will be available in September 2015.

With the new JVC Log mode, the GY-LS300 delivers wide latitude and high dynamic range – up to 800 percent – to rival the look of film. The camera’s Super 35 CMOS sensor delivers a higher contrast ratio between dark and bright areas within the frame without saturation while providing details within highlights and shadows. V2.0 also adds 4096 x 2160 Cinema 4K and 2048 x 1080 Cinema 2K recording modes at various frame rates, each with a 17:9 aspect ratio for digital cinema presentations, along with the ability to output a full HD signal via HDMI/SDI when in 4K recording mode – perfect for monitoring in HD.

Prime lenses have a fixed focal length, but the GY-LS300’s new Prime Zoom feature takes advantage of JVC’s unique Variable Scan Mapping technology, which was created to electronically adapt the active area of the camera’s image sensor to provide native support of various lenses when paired with third-party lens adapters. When used with a Micro Four Thirds (MFT) prime lens, the image can be adjusted between the maximum scan area and minimum scan area using the camera’s zoom rocker. As a result, the camera can deliver 2.3x maximum zoom for HD or 1.25x maximum zoom for 4K. The new Prime Zoom feature can also be used as a lens extender for zoom lenses.

Version 2.0 adds a histogram display, which is useful for checking the exposure by showing the brightness distribution of the image. The function is accessed through a convenient user button, and the range can be set to provide top and bottom limits. Beyond a histogram, V2.0 adds a colour matrix adjustment, spot meter for setting exposure values, and black paint setting to precisely adjust colour temperature of master black. There's a 2:1/1:1 zoom for critical focus, which along with the camera’s standard waveform and focal assist features, makes setting up the perfect shot a little easier, with a new 70Mbps recording mode that makes it possible to record 4K on economical Class 10 SDHC/SDXC memory cards. There’s also the ability to trigger recordings via HDMI/SDI and JVC LUT support via the Atomos Shogun external recorder.

“We listened to our customers and made sure this firmware upgrade delivered the features they wanted, as well as recording modes specifically designed for the 4K digital cinema market,” said Gustav Emrich, European product manager, JVCKENWOOD. “The GY-LS300 will also have the unique ability to use a prime lens as a zoom lens, which gives filmmakers even more shooting flexibility.”

Designed for cinematographers, educators, documentarians, and broadcast production departments, the GY-LS300 is the flagship camera for JVC’s new 4KCAM product line. It accommodates a variety of workflows with the latest advancements in 4K imaging and efficient encoding for seamless workflow integration. It also includes a built-in HD streaming engine with Wi-Fi and 3G/4G connectivity for live HD transmission directly to hardware decoders, the Wowza Streaming Engine and the ProHD Broadcaster server powered by Zixi. With support for various streaming protocols including RTMP, the cameras can stream directly to content delivery networks (CDNs) like Ustream and popular Web sites like YouTube.