The latest and finest camera equipment on display at Pinewood: BSC Expo 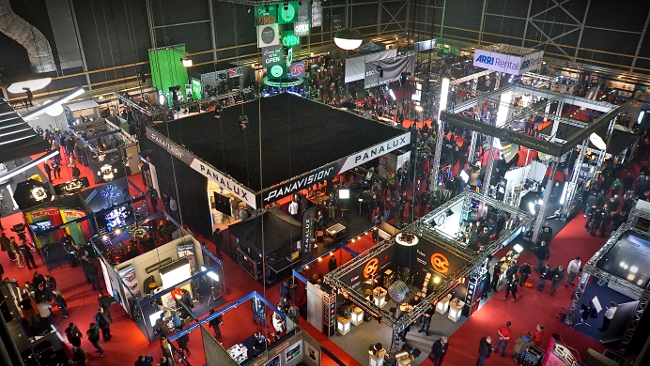 Phil Rhodes, RedShark Technical Editor, takes a trip to Pinewood and the BSC Expo to check out the latest gear for productions with a healthy budgets.

Much as it makes everything expensive, it's sometimes nice to go to an event where every second camera isn't a DSLR. At the BSC Expo, which took place last Friday on the Richard Attenborough stage at Pinewood, every other camera is an Alexa. In some ways, this is barely an improvement, given that large and small productions need not actually be mutually exclusive, but make no mistake: the BSC Expo is the film industry equivalent of a five-star hotel for camera nerds. Tyre-kickers, opined one exhibitor whose blushes I shall spare, need not apply.

That said, the first thing to greet visitors striding up the road between H and the Attenborough stage did have tyres, being one of Alpha Grip's impressive crane-equipped vehicles. Capable of thundering along at up to a hundred miles an hour with what looked like a twenty-foot crane on the roof, the vehicle, including crane operator, technicians and a precision driver, ends up costing several thousand pounds a day with every discount you can possibly imagine, not including the camera itself. It recently worked on the upcoming Mission: Impossible. If you're wondering whether this sets the tone: yes, it does.

Gliding around overhead and suspended from a couple of construction cranes that must themselves cost most of a microbudget to rent for the day, we find a cable-suspended camera capable of 3D motion within a huge volume of space. Rounding out the exterior exhibition of ways to put your camera a long, long way away is the enormous MovieBird crane, itself resembling a large, black-painted piece of construction equipment, and emblazoned with a modest little sticker insisting that nothing should be added to or removed from the crane without the operator's direct involvement. Given the forces involved and size of the titanic telescoping arm (which would require a telescope to comfortably view the far end), I'm not only going to obey the notice; I'm going to back away, keeping my hands where the operator can see them, making no sudden moves.

Inside the Attenborough stage, we discover huge arrays of those LED lights currently only available to the deep-pocketed, but wherein daylight tends to mean roughly the same thing across an entire manufacturer's products (and sometimes even between companies as well). I'll gloss over the exhibitors whose displays still consist of daylight options ranging, if we're being flowery, from "nordic midwinter" to "los angeles sunset," offering a different daylight for every day of the week. Let's instead consider SmartLight's SL1 LED panel. Designed to replace something like a four-foot, four-tube Kino-Flo, it's smaller and lighter, probably tougher, and the claims that it's more efficient aren't unreasonable. The key advantage of the technology over fluorescent is that it can be dimmed without colour rendering problems, which fluorescent, no matter what anyone tells you, cannot. It's only very slightly cheaper than Kino-Flo's products, though, which makes it really a bit too expensive. One is inevitably reminded of Mole-Richardson's pledge to keep LED affordable. If this stuff is as expensive as the gear everyone already owns, there's some question over what the point is. Still, it's quality stuff, and it looks a bit brighter than a competing fluorescent to boot.

Over on the other side of the stage, Cinelab London is keenly promoting its all-in package deal to shoot, process and transfer film, in cooperation with Kodak. Although this doesn't really make shooting film any less expensive than it's always been, it would probably represent a competitive deal if Cinelab had any competitors. The real shame is that this wasn't done ten or fifteen years ago, when it might have been easier to make a more significant difference to the long-term prospects of photochemical origination, which currently range from grim to grimmer. On the upside, 35mm camera equipment is now so cheap to rent it's practically a free accessory to the lens set, and crew working at even the highest end – such as Alpha Grip's crane technician – now speak lovingly of photochemical acquisition. Could 35mm origination pay for itself in nostalgia-motivated discounts on other areas of the production? It's possible.

Avoiding the £3-a-cup coffee stand, we can now go and look at Panasonic's re-entry to the dramatic acquisition market, or at least to crane awkwardly to see over the top of the person in front. Having made our virtual way through the crowds, we discover a tidy little package which uses a common recorder (with cute removable control panel) to accommodate two camera heads: the big-chip VariCam 35 with its single 4K sensor and the three-chip VariCam HS for slow motion work.

The company is refreshingly upfront about why this took so long - "we missed the boat" was the term used - and although the largely-defunct pan-flash of stereoscopy may have been a more important distraction, there's nothing wrong with a bit of competition, no matter how late, to keep the rest of this well-heeled market honest.

We will, I suspect, be talking considerably more about this camera in the near future – perhaps especially the HS version, useful for not only its high frame rate option, at up to two hundred and forty frames per second, but also because it's a traditional two-thirds-inch high definition camera with all the handy lens options that implies. The only slight downside is that the whole system requires another flash card format, in the form of Panasonic's latest incarnation of P2, which is apparently necessary in order to support the higher bitrates of the company's most recent bitrate bump in its acquisition codecs. We do wish companies would stop doing this. Enviable as P2's reputation for sturdiness is, I don't recall having too many problems with flash cards in general, though I've never tried to use one as a bottle opener.

Last, but not least

There are just a few more almost administrative things to mention. Photon Beard's long-awaited Platinum Blonde HMI is finally, finally, honestly ready for distribution, and we'll try to look at it soon. The company's LEDHeads – yes, LED redheads – are now available, with the canny trick of interchangeable remote phosphor panels to facilitate either daylight or tungsten output (or, we're told, possibly green or blue in future, to light chromakey screens). How well they match real tungsten lighting is, of course, the big issue. At 80 watts of power consumption, they can't reasonably be expected to have quite the same output as an 800W halogen lamp. Nonetheless, the energy saving – enough to make them marginally battery-powerable – is naturally very welcome in a world where even half an hour of battery powered light can make the difference between having time to finesse a shot, and, well, not.

And finally, it would really be stupendously awesome if Pinewood wasn't at the end of the Metropolitan line and then a shuttle bus ride. Don't miss the shuttle bus on a cold January morning. It isn't worth the frostbite.