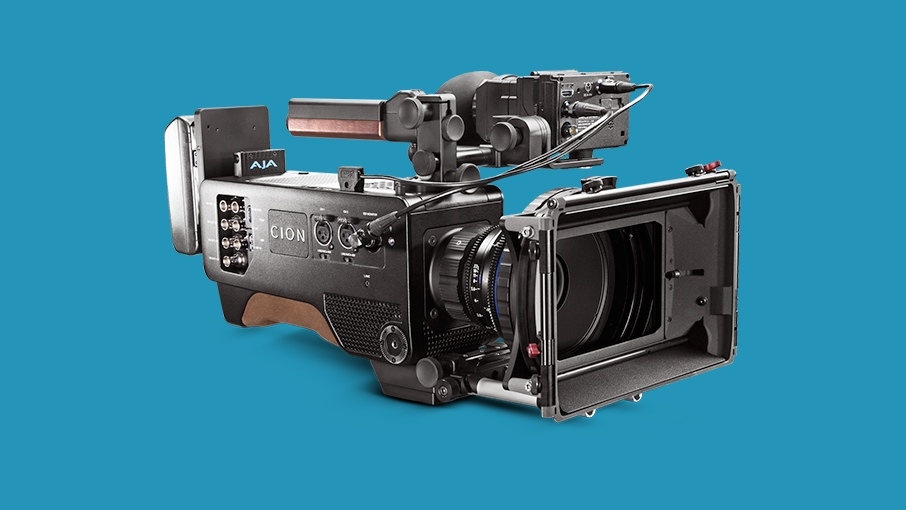 AJA has just announced that the CION 4K Production Camera will start to ship this year, at the end of December. It also said that it is accepting pre-orders from today from this list of resellers.

The CION was first announced at April's NAB convention in Las Vegas, where it was, perhaps, one of the biggest surprises of the show. Built around tried and tested technology from the company's Ki Pro Quad, the camera has an APS-C sized COMS sensor with a global shutter, the CION can record directly to  4K/UHD and 2K/HD as ProRes 4444, ProRes 422 (HQ), ProRes 422, ProRes 422 (LT) and ProRes (Proxy).

4K Raw video is available at up to 120fps via the 4x 3G-HDSDI outputs, and the image is oversampled from the entire sensor.

We first saw the CION working in September at Amsterdam's IBC, and the early ungraded results (seen in the reel below) were impressive. We get the impression from the company's press release that the intervening time has been spent working on the camera's colour science, which, according to AJA Video Systems President Nick Rashby, is "absolutely incredible".

Read AJA's CION press release in full after the break

Tokyo, Japan, Inter BEE Conference, Hall 4; 4206 (November 18, 2014) -- AJA Video Systems today announced that the company has started accepting orders for the new CION production camera, with an anticipated initial ship date by the end of December. CION is both ergonomic and lightweight with unparalleled connectivity, and is capable of shooting at 4K/UltraHD and 2K/HD resolutions direct to Apple ProRes or AJA Raw. For information on where to place orders, please visit http://www.aja.com/en/where-to-buy#wtb-cion for a list of AJA CION resellers.

AJA pioneered professional ProRes support with the Io HD, the first non-Apple device to encode ProRes, introduced in 2007, and then the Ki Pro recorder, introduced in 2009. CION builds on these achievements by offering in-camera recording directly to proven AJA Pak SSD media in the Apple ProRes family of codecs - including 12-bit ProRes 444 - for pristine image capture at up to 4K/60p. CION also outputs AJA Raw at up to 4K/120p, with support already announced by industry leading companies such as Adobe and Colorfront.

We have recruited an incredible team of resellers from all over the world to help bring CION to market. Demand has been overwhelming and weve decided to start taking orders to pre-allocate the many cameras that we have already assembled in our Grass Valley manufacturing facility, said Nick Rashby, president, AJA Video Systems. The image quality, functionality, and reliability of this camera is absolutely incredible. We are thrilled to finally start accepting orders from our CION resellers, and our supportive customers will see that this camera was worth the wait. Our engineering team has been working tirelessly to push the color science on this camera, and the picture is simply breathtaking.

About CION
AJAs CION is an ergonomic and lightweight professional production camera, capable of shooting at 4K/UltraHD and 2K/HD resolutions. CION offers in-camera recording directly to the Apple ProRes family of codecs including ProRes 4444, and ProRes 422 up to 4K 60 fps, and offers the ability to output 4K AJA Raw data at up to 120 fps via 4x 3G-SDI outputs. When recording in HD or 2K, the image is oversampled from the full 4K sensor, retaining focal length as well as providing a vibrant and detailed image. CION features a simple interface with direct controls, as well as camera menu parameters and live preview video stream that are remotely configurable and viewable through any web browser via a LAN connection.