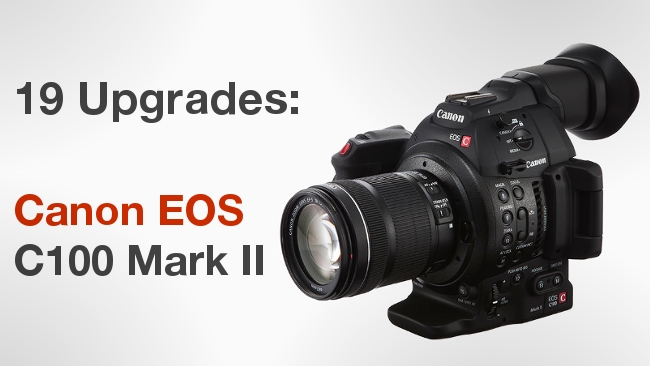 While Canon's recent updates of its camera line may have left something to be desired, namely 4K recording, the company is stressing 19 improvements for its C100 Mark II over the previous model. The question remains: are these changes enough to entice buyers in an increasingly-competitive market?

Remember all those rumors of 4K video recording for Canon's new 2014 cameras? Well. as rumors are apt to be, those early reports turned out to be nothing but hot air, disappointing many would-be upgraders who yearned to take the next step up in resolution. But Canon, turning defense into offense, is touting the advancements that it did include in its new versions of its once-popular cameras, particularly that of the Canon EOS C100 Mark II.

Straight from the pages of Canon's video resource site, here's a bullet-point style list of the 19 improvements Canon has made for the C100 Mark II over the previous generation.

Obviously, Canon has taken its customers' suggestions to heart in crafting the C100 Mark II, but is the omission of 4K UHD or DCI recording, circa 2014, a deal-breaker? Let us know in the comments!

What is most significant about the Canon EOS C100 Mark II Digital Video Camera, the second-generation version of the popular Canon EOS C100, is that most of the new or improved features compared to its predecessor were added in direct response to feedback from users. Designed as a one-person production beast, the EOS C100 has proven to be a widely popular model, and this new EOS C100 Mark II version tweaks the original's components in all the right ways. This compact, lightweight camera is equipped with a more powerful image processor, a redesigned OLED display, a larger adjustable viewfinder, advanced autofocus capabilities, dual AVCHD and MP4 file formats with multiple recording options including 1920x1080 60P image capture, and wireless network compatibilities. There's little doubt that with these upgrades, this most recent edition to the Cinema EOS line of professional cameras is sure to get a lot of attention from filmmakers around the world. Let's take a look at 10 important new features and improvements in the Canon EOS C100 Mark II:

1. DIGIC DV 4 – A More Powerful Image Processor
While retaining the same Super 35mm 8.3 megapixel CMOS sensor found in the original EOS C100, (and the EOS C300 and EOS C500 for that matter), the EOS C100 Mark II incorporates an entirely new image-processing platform for Cinema EOS – the DIGIC DV 4. This is some serious processing horsepower and it offers improved image quality as well as reductions in the occurrences of false colors, moiré and "jaggies," as well as limiting levels of noise when high ISO speeds are used. Using an advanced new debayering algorithm, the DIGIC DV 4 separates the RGB channels into three individual 8 megapixel (4K) signals, as opposed to the 2 megapixel channels that were multiplexed in the EOS C100. The 4K RGB signals are then scaled down internally into a HD (1920x1080) signal that is recorded. The bottom line here is that the perceived resolution has been improved, and ultimately the image you record internally or output via HDMI to an external recorder, should be significantly cleaner.

2. Improved Viewing: Side Hinged OLED Display and a New Large Adjustable EVF
Canon's EOS C100 Mark II has a much-improved display panel and EVF. This model uses a new 3.5-inch 1.23 megapixel OLED display panel that offers approximately 100% field-of-view coverage with a 28.2° wide viewing angle, wide color range support, and improved viewing in brightly lit situations such as shooting outdoors. The monitor panel is hinged on the left side of the body (instead of at the top as with the EOS C100) and can be flipped and rotated 270°. This will allow you to face the screen towards the on-camera subject or close it flat against the operator’s side of the camera body. Additionally, the display panel now includes a joystick and 3 buttons (MENU/CANCEL/DISP), which offer MENU access even when the grip unit is not attached.

The EVF on EOS C100 Mark II has been substantially upgraded, and it's now adjustable! It is now much larger and includes a large detachable eyecup. This improved viewfinder is the same quality and resolution as the Canon’s EOS C300 and C500 cameras with greatly improved visibility through the use of a .45-inch, 1.23 megapixel color EVF panel. The viewfinder can be tilted to an angle of 68 degrees allowing it to be used more effectively in a variety of shooting situations.

3. Built-In Dual Pixel CMOS AF and Face AF Autofocus
Canon’s Dual Pixel CMOS AF, introduced with the EOS 70D and available as a paid feature upgrade for the EOS C100 & C300, will come standard with the EOS C100 Mark II. Dual Pixel CMOS AF makes incredibly smooth and consistent autofocus, so focus transitions are natural and subjects remain tracked as they move -- as long as you keep the subject in the center portion of the frame. Additionally, One Shot AF, which is basically a quick 'focus check' button on the front of the body, is faster and more responsive, without unnecessary searching or hunting, by the addition of Dual Pixel CMOS AF. Dual Pixel CMOS AF is compatible with over 103 Canon EF lenses, and if an STM lens* is used, face detection AF (Face AF) becomes possible. This feature, when enabled, allows for incredibly responsive and reliable contrast detection auto-focusing. Face AF is capable of tracking more than one face at a time, allowing the shooter to switch from one face in frame to another. The result of this is a focusing that will detect and focus on faces in virtually the entire image area of the frame. When there are no faces present in the frame and the MENU is set to Face Priority, Dual Pixel CMOS AF (when activated) takes effect for the screen center only. If the menu is set in Face Only mode, when no face is detected in the frame, the camera reverts to manual focus. Of course, autofocus capabilities are optional and can be turned on or off in the MENU.

4. 59.94P/50.00P Recording
Everyone asked for it, and thanks to a significant processor upgrade, Full HD (1920x1080) 59.94P/50.00P recording is now possible with both the high quality AVCHD format and the web friendly MP4 format (at 28 Mbps and 35 Mbps, respectively). Both share the MPEG-4 AVC/H.264 video compression format. Slow & Fast motion recording is now possible with the MP4 recording mode, giving C100 Mark II users the HD frame rates required for a variety of productions.

5. AVCHD and MP4 File Formats
Besides 60P recording options, another important benefit from the extra processor power is that the EOS C100 Mark II can record in both the AVCHD or MP4 format at a variety of bit rates, resolutions, and frame rates in two distinct recording modes. Besides Slow and Fast motion MP4 recording, the EOS C100’s dual SD card slots offer Double Slot Recording (AVCHD+AVCHD, MP4+MP4, or AVCHD+MP4) for precise back ups in the same or mixed modes, simultaneous recording with mixed bit rates in one or both formats (AVCHD+MP4 or MP4+MP4), up to 12 hours of continuous recording with shot indexing (AVCHD), and MP4 conversion, which converts an AVCHD or MP4 recording from the main SD card slot into a 3Mbps (640x360) MP4 movie in the other SD slot. This gives you a smaller file that is easier and faster to wirelessly transmit. MP4 conversion is not possible for MP4 files at 35 Mbps and AVCHD files at 28 Mbps.

6. Built-In Wi-Fi® for Rapid File Sharing and Remote Camera Control
The addition of wireless file-transfer enables the EOS C100 Mark II to function in multiple production applications, including the transfer of time-critical news video or off-site file back ups. Utilizing dual 5 GHz and 2.4 GHz frequencies, the camera can transfer video files via FTP server for instant relay, or send MP4 video to the web browsers of laptops or tablets for viewing, and storage (even on PC's lacking playback software). Remote control of the camera via a simple browser window is now possible via a compatible smartphone, tablet, or laptop.

7. Built–In Microphone in the Camera Body
The camera body is now equipped with a monaural microphone. This makes it possible to record scratch audio or simple messages without the need for the handle unit, and offers a sound solution for working with the camera in its smallest configuration.

8. Canon Log LUT for Corrected On-Set Viewing
Canon Log gives you a versatile file, providing maximum dynamic range for post-production, but in its ungraded form doesn’t accurately represent what the final image will look like while the camera’s output is viewed on a monitor. The EOS C100 Mark II has a new option that offers a built-in Canon Log LUT (Look Up Table). It allows for a live, corrected signal to be viewed on a monitor connected through the HDMI.

Corrected images can be viewed in Wide DR or BT.709 color spaces. Since this would be used for monitoring only, the Canon Log LUT can be turned on or off in the camera’s menu when you want to record the uncompressed HDMI output on an external recorder.

9. A Cleaner Uncompressed Output over the HDMI
Thanks again to the DIGIC DV 4 Processor, the uncompressed YCbCr 4:2:2 8-bit video signal (with time code data and 2:3 pull-down markers superimposed) output over the HDMI, should be cleaner with fewer visual artifacts and less noise at high ISO settings. Additionally, you can output 1920x1080 59.94P through the HDMI.