You've never seen a race video like this before 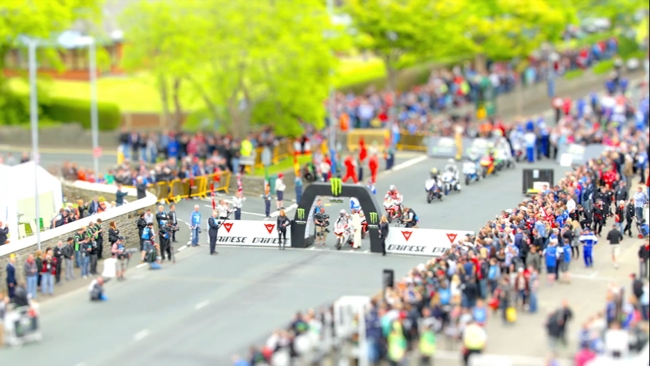 Tilt-Shift is a remarkable illusion and when it's done well, it's compulsive viewing!

We love Tilt-Shift video. It's a persistent optical illusion that makes the subjects of the video look like they're miniature models. And the remarkable thing about it is, even when you know exactly how it's done, it still looks convincing.

This little film is a perfect example of the art.

It seems to work really well when there are crowds and they have their attention focused on something like a race.

The technique is always the same: shoot from a high angle, aim for a very narrow depth of field, and, speed up the action (to make the movement look toy-like and unnatural) and, if appropriate, turn up the saturation.

A bit of manic dubstep in the soundtrack often helps as well.

TT Microworlds, produced by  Isle of Man based film producer Glenn Whorrall of Your Movie Crew, takes a new slant on the Isle of Man races - making this classic event look like a cross between the ultimate model race track and an elaborate stop-motion film. This film of last year's Isle of Man Tourist Trophy was screened at the Villa Broadway Cinema in Douglas during the 2014 TT race week.

This is what Your Movie Crew says about the film:

The Isle Of Man Tourist Trophy (TT) motorcycle races are held in June every year and see competitors hit speeds of over 200mph on open roads. Over 40,000 bike fans flock to the Island, drawn by what has become one of the most dangerous and exciting events in the sporting calendar.

'TT Microworlds' was shot at the 2013 races, and is a unique perspective on a world-famous event. using the tilt-shift technique the scenes are rendered in miniature and the racers and fans appear as figures on a model racing track."

Turn the page to see the video

Thanks to Philip Jefferson for bringing this to our attention!

If you liked this video - check this one out: one of the best tilt-shift videos we've ever seen!