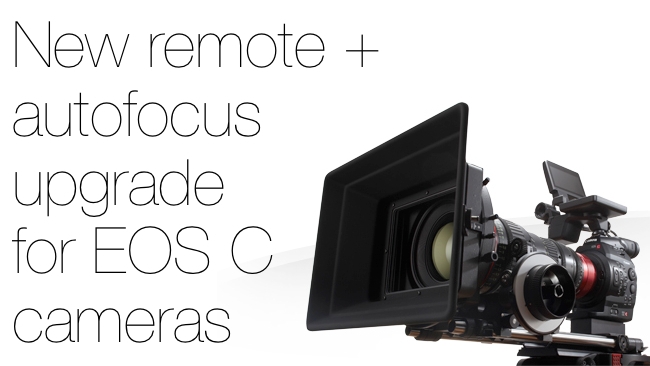 Canon is bringing out a wired remote controller for its Cinema EOS cameras, apparently as a result of user requests

Just a quick note to say that Canon has announced a wired remote controller for their Cinema EOS cameras.

Apparently the device, the - for once sensibly named - RC-V100 will be compatible with a wide range of canon professional video cameras, including the XF300-series, EOS C100, EOS C300 and EOS C500. To make the cameras compatible, there needs to be a free firmware update.

The inspiration for the new remote control came from customers, who "inspired" Canon to build the device.

It provides access to any in-camera function using the standard operating menus, and has dedicated interfaces that allow users control of common settings such as iris, zoom and white balance. There are four buttons available for customer settings.

A new free firmware update will allow uninterrupted recording on the EOS C100, and users will b enable to set in and out markers in-camera.

Apparently only compatible NLE software can date full advantage of Continuous recording. Presumably there's some kind of file-spanning, which the software will have to understand to make it work.

Canon's also announcing that in future there will be a paid for upgrade that brings their Dual Pixel CMOS Autofocus functionality to the EOS C300. Dual Pixel is a very fast autofocus technology for large-sensor cameras. It was first announced for the C300 so it's perhaps not a massive surprise but a good one nevertheless.

Finally Canon is bringing Peripheral Illumination Correction to its CN-E35mm T1.5 L F and EF-S55-250mm F4-5.6 IS STM lenses for the 3 EOS "C" cameras. This is a process that reduces the darker edges of an image either caused by the lens itself or ambient conditions.

Read Canon's full press release, including pricing and availability, after the break

Developed in direct response to market feedback, the RC-V100 offers greater creative flexibility for Canon camcorder users by expanding the scope of possible installation locations and increasing compatibility with multi-camera shoots, freeing DoPs and cameramen to concentrate on getting the shot they really need.

Providing access to any in-camera function using the standard operating menus, the RC-V100 features dedicated interfaces that allow users control of common settings such as iris, zoom and white balance, whilst a number of more advanced adjustments, such as knee point/slope and master pedestal, can also be made directly. Support for custom settings is provided in the form of four buttons that mirror the operation of assignable camera buttons 1-4 on the body itself.

“Our customers are constantly inspiring us with their creativity and desire to use our products in new and different ways – sometimes in ways we didn’t expect. We really want to feed this creativity by expanding shooting possibilities even further, and this has resulted in the development of the new Canon Remote Controller RC-V100,” said Kieran Magee, Director of Professional Marketing, Canon Europe. “The customer feedback we receive is invaluable to us, and we hope that the addition of this new remote will enable even more of our customers to realise their vision.”

At launch, the Canon Remote Controller RC-V100 wired remote will be compatible with a range of Canon professional video cameras and Cinema EOS cameras, including the XF300-series, EOS C100, EOS C300 and EOS C500. A free firmware update will be required to provide compatibility with models announced prior to the launch of the new remote control.

Continuous Recording functionality will soon be available for the EOS C100, thanks to a free firmware update that will permit uninterrupted recording[i] and the ability for users to set in and out markers directly, in-camera. Selected moments can then be instantly accessed during editing, saving time and effort. Furthermore, the ability to record in full, particularly when shooting significant moments such as weddings or important events, allows users to access moments that might not have been spotted on the day, or to adjust the marked shots for the best possible end result. Compatible NLE software is required to take full advantage of Continuous Recording; at launch the feature will be supported by EDIUS Pro 7 from Grass Valley.

In addition, Canon is announcing the future availability of a paid-for upgrade that brings Dual Pixel CMOS AF functionality (DAF) to its professional EOS C300 camcorder. Dual Pixel CMOS AF is a ground-breaking, Canon-developed technology that expands shooting possibilities by providing smooth, fast, high-performance continuous autofocus in large sensor video cameras, to offer even greater creative flexibility in everyday use.  First announced for the EOS C100, and since requested by many
EOS C300 users, this unique feature expands shooting opportunities for the popularcine camera even further.