Modern anamorphic lenses are nothing like those of the past 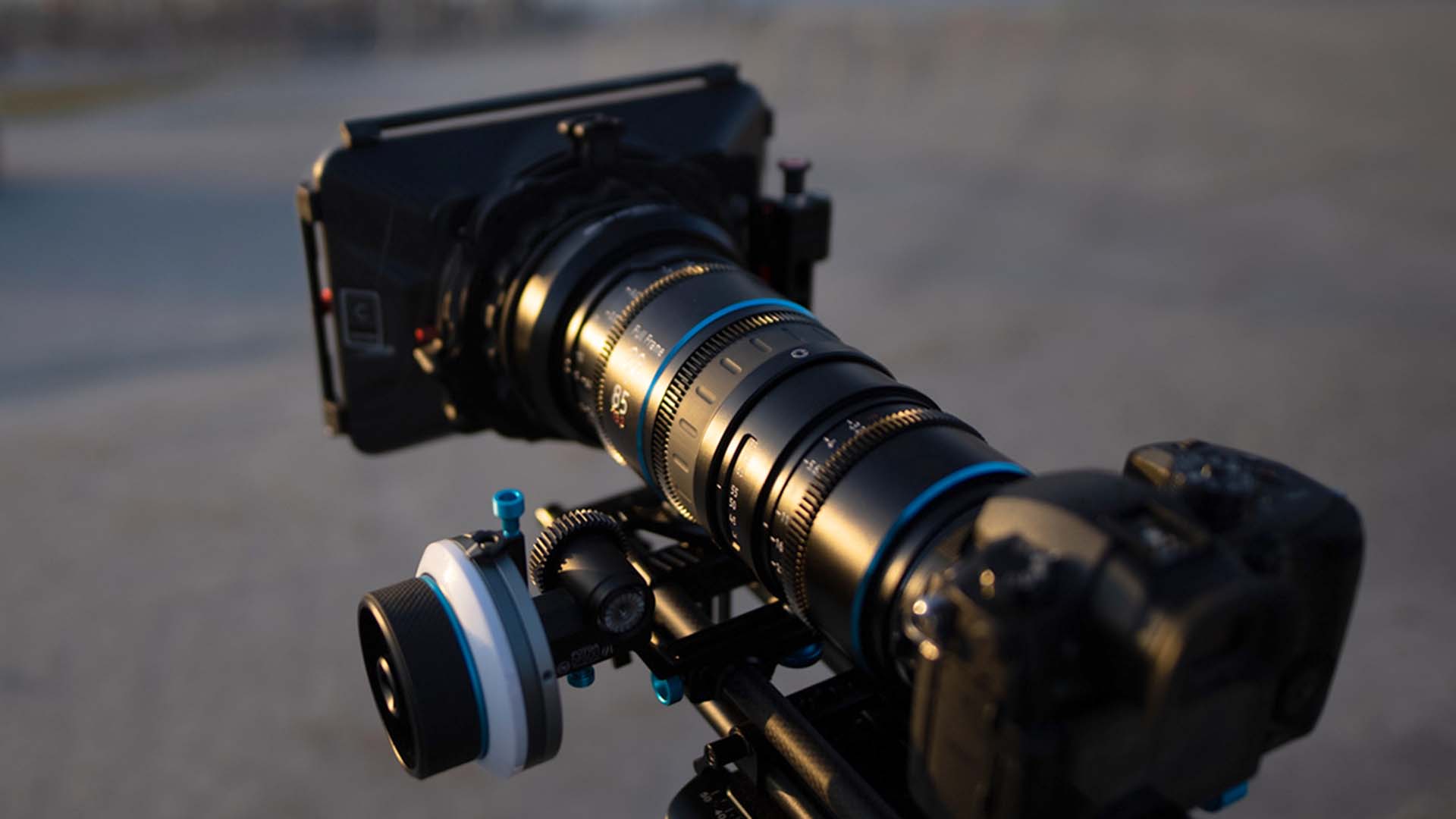 Is there any low-cost lens manufacturer that doesn’t offer an anamorphic option yet? Sirui, Laowa and Xeen have all joined party in the last few years, and even Schneider-Kreuznach, usually a purveyor of lenses in the reasonably-expensive part of the market, is about to get back into the game with what’s effectively a modernised reissue of the Iscorama 54 anamorphic front element and an accompanying set of spherical primes. The classic version had reached stratospheric peaks of costliness on everyone’s favourite internet auction site, presumably prompting someone to blow dust off the drawings. 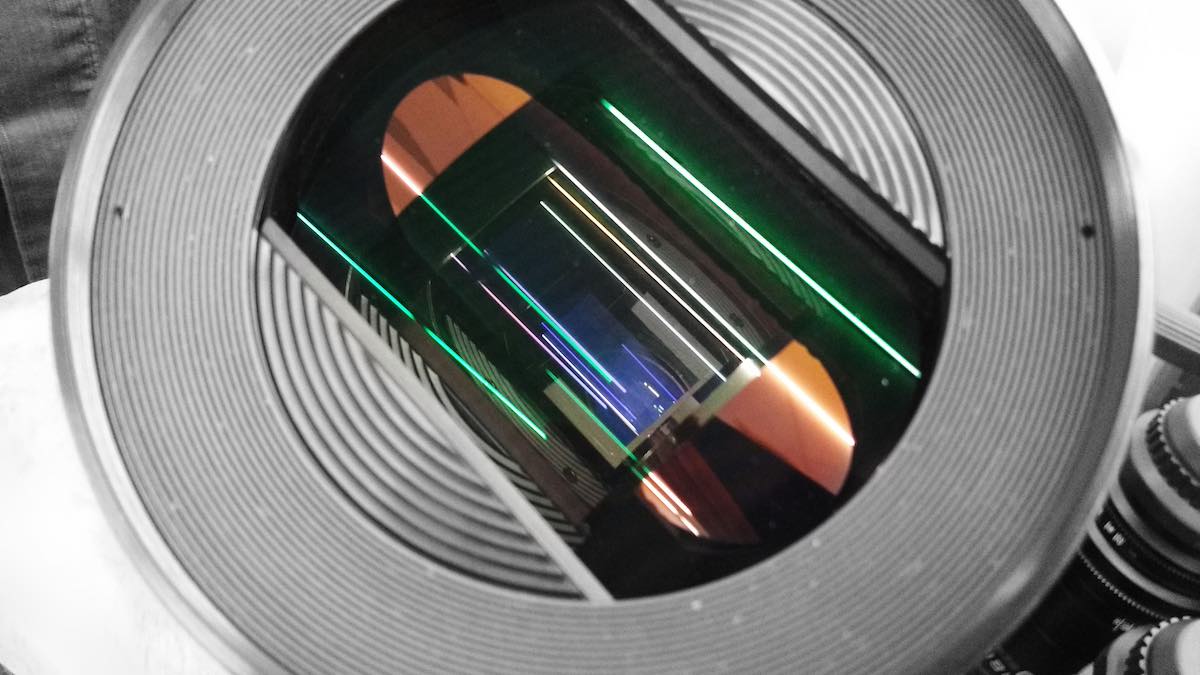 The issue is that a lot of these affordable modern anamorphics are actually not much like the anamorphics of old. Neither, for that matter, are the more expensive mid-market options, much less the top end, which can rival spherical lenses of yore in terms of cleanliness and sharpness, at least if they want to. Manufacturing techniques have changed and the amount of compression called for, in order to fit a roughly 2.39:1 image onto common cameras, isn’t the same now as it was in the 50s.  Our purpose today, then, is to look not only at what’s available, but what it’s designed to do for us.

Anamorphics built for the digital age often use less compression than the classics, mainly because, until the advent of large format cameras, there was exactly one sensor available to cinematographers which could properly accommodate a 2:1 anamorphic built for 35mm formats. The 4:3 Alexa could see the whole vertical area of the image. Little else could, and while many sensors had enough resolution to extract a useful picture from a 2:1 lens, the result might have been using a very small sensor area and thus a lot of magnification of a picture that wasn’t staggeringly sharp to begin with.

We probably shouldn’t consider that sort of setup as really leveraging everything the lens has to offer. These days, we can get around the problem with cropped modes on large format cameras, but it’s also led to a lot of 1.33:1 lenses. The 1.78:1 aspect ratio of a 16:9 sensor built for HD television multiplied by 1.33 gives us a 2.37:1 image. 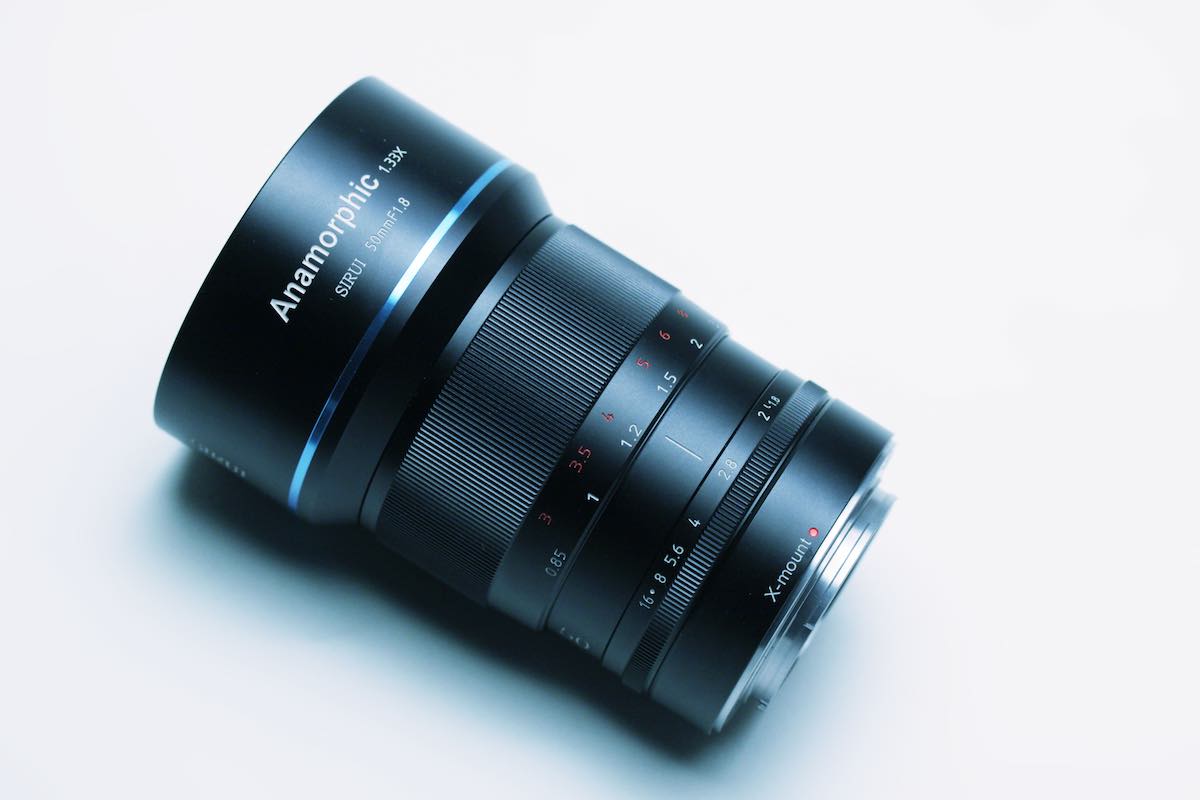 Sirui's 1.33 options are fast, affordable and have reasonably high performance, though in return they require shallow mounts.

The idea of anamorphics in compression ratios other than 2:1 is not new. MGM Camera 65 added a 1.33:1 lens to the original Todd-AO 65mm format and was in use from the late 50s. It was eventually adopted, more or less, as Ultra Panavision 70, which (apart from some early shots which were essentially got-away-with) used 1.25:1, about the smallest degree of compression anyone’s ever felt to be worthwhile

A wide range of compression ratios up to 2:1 are available. Vantage has its 1.33:1 V-Lite anamorphics, and at the other end of the price range there’s Sirui’s fast f/1.8 1.33:1 option, requiring a shallow lens mount. P&S Technik’s Technovision Classics are 1.5:1 and cover larger formats. and Servicevision has the Scorpiorama at 1.65:1, the same as a Panavision Ultra Vista. Caldwell specifies its Chameleon set at 1.79:1, a mere fraction less than Cooke’s FF Anamorphic and the vastly less expensive set from Vazen at 1.8:1. And then, yes, there’s probably a couple of dozen 2:1 options out there, at all price points.

It’s tempting to assume that higher ratios yield more, er, anamorphic-ness, and that’s true to a degree. Some lenses – generally those with the cylindrical anamorphic element behind the iris rather than at the front – don’t look very anamorphic at all, while some higher-end optical designers have referred to decades-old plans or carefully tweaked their work to provide attractive results.

Vantage, for instance, describes its 1.33:1 V-Lite anamorphics as “Vintage ‘74.” The number indicates an artistic intent; it’s been engineered to do that. Cooke’s recent designs produce a classic if gentle horizontal flare, tinted in the company’s signature gold. The reissued Isco 54 produces chiefly white flare, which is perhaps a little unimaginative, although things like the Hawk Vs and Kowa Mirrorscope have similar colours. 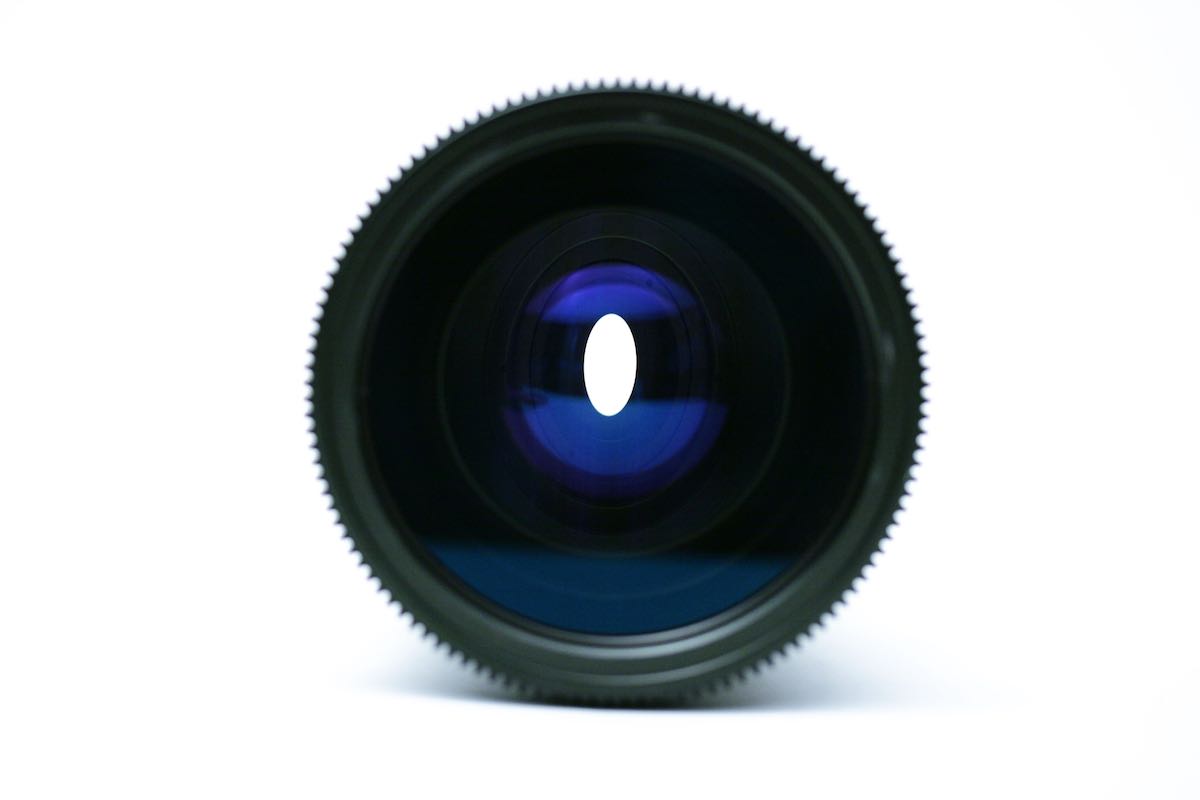 SLR Magic. Notice the fixed aperture which has a much more exaggerated shape than the bokeh the lens would produce naturally.

Others have used what are quite frankly shortcuts to provoke what are perceived as the typical effects of anamorphics. Some of them have elliptical apertures behind the actual adjustable iris, to force out-of-focus highlights to become more anamorphic-looking than a 1.33:1 lens would otherwise provoke. It works at wide apertures, but inevitably blocks light, reducing transmission, and can interact oddly with the real aperture at higher stops. Other lenses adopt deliberately deep blue coatings to provoke blue flare. The SLR Magic Anamorphot series does both. The results of these approaches can be a little unsubtle, and they’re certainly not reflective (ha!) of the highest-end designs.

In the end, a combination of cost, mount compatibility and sensor will greatly narrow down the options for most people. The vast majority of modern cameras, with Super-35mm widescreen sensors behind PL mounts, will not accommodate 2:1 compression without quite some compromise to field of view, though that can be acceptable. Many of the options with the highest price-performance ratio (Sirui, particularly) require shallow mounts. Options that suit conventional mounts and widescreen sensors tend to be expensive, and taking out classic 2:1 lenses often means expensive cameras with big enough chips to catch all the photons on top of wallet-draining lenses to begin with. 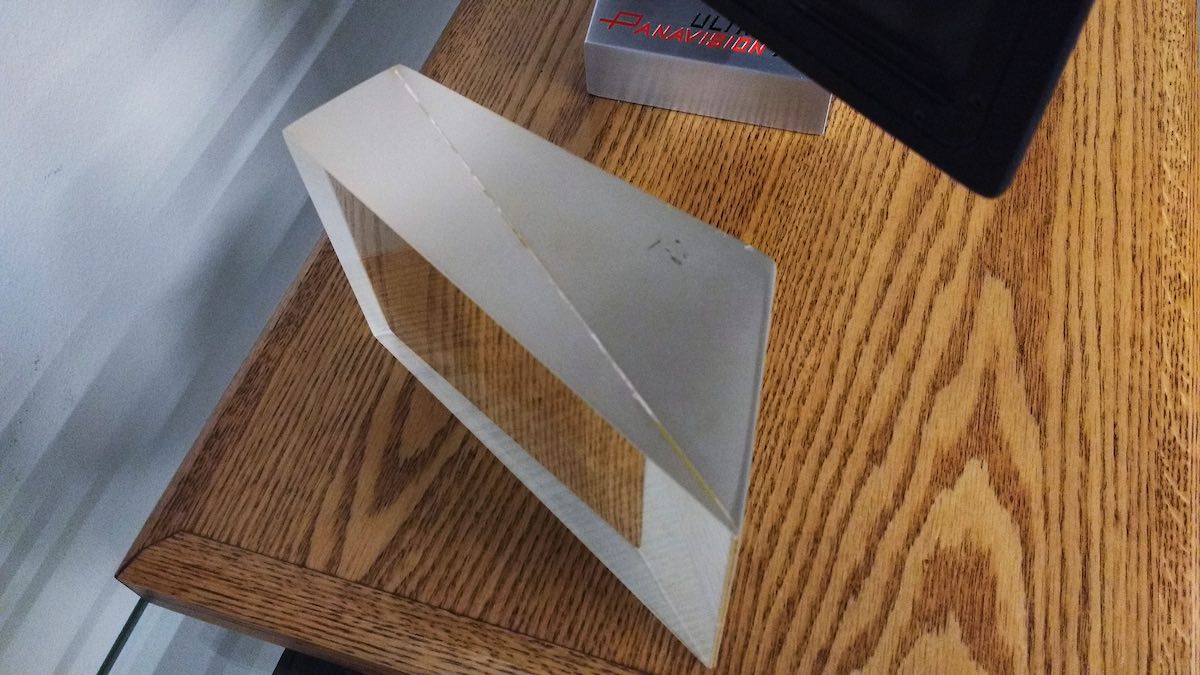 Yes, this is another way to make an anamorphic lens element. No curves, very different flare. This is decades old and the prism approach is no longer used.

The onus is perhaps most on camera manufacturers to give us more compatible tools. Even the LPL mount is inexplicably deep, making things just like anamorphics harder to build. At 44mm it’s only a little shallower than conventional PL, and even as Canon moves the world towards its RF mount we’re still seeing new cameras released, by other companies, with EF mounts. JVC managed to fit a Super-35 sensor and a rotating, mechanical ND filter wheel behind a micro four-thirds mount on the GY-LS300. It can be done, and cameras taking that position have access to some wonderful glass as a result.

In the meantime, it’s a matter of continuous astonishment that there’s business for the sheer number of lens manufacturers that currently exist, so anamorphic options for everyone should continue to grow.