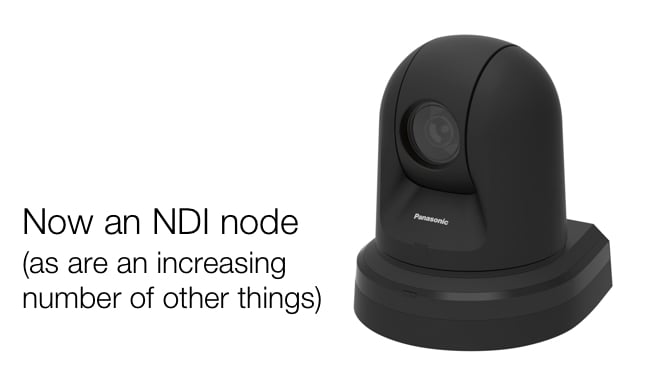 We’ve talked before about some of the advantages that NewTek’s NDI IP production system can bring to workflows, and the integration of Panasonic’s AW-HE130 and AW-HE40 series PTZ cameras highlights it nicely.

Essentially this integration means that when added and configured as production inputs using NewTek Connect Pro software, the AW-HE130 and AW-HE40 cameras become recognisable on the LAN as NDI video sources.

What’s more the cameras will not only stream video to and receive control commands from NewTek’s TriCaster, they will also be recognised by other compatible systems and devices as NDI nodes, enabling access to their video feeds across the network and throughout facilities for production use.

This is the culmination of a year or so’s work. At NAB 2015, Panasonic showed direct streaming connectivity and camera control with NewTek’s TriCaster multi-camera video production systems. During NAB 2016, work began to enhance these capabilities using NDI and NewTek Connect Pro software.

And with more and more products signing up to the technology, the ability to quickly add video mixers, graphics systems, capture cards and other production devices as part of an interconnected production workflow is getting easier all the time.

There has been much talk in the industry of the need to establish IP standards. Having the likes of Panasonic join Adobe, Evertz, JVC and more under the NDI umbrella means that NewTek is becoming ever more likely to be caught in possession of the de facto one at least. JVC has bridged its complete product line of professional cameras with the NDI protocol; it will be interesting to see what Panasonic does next.