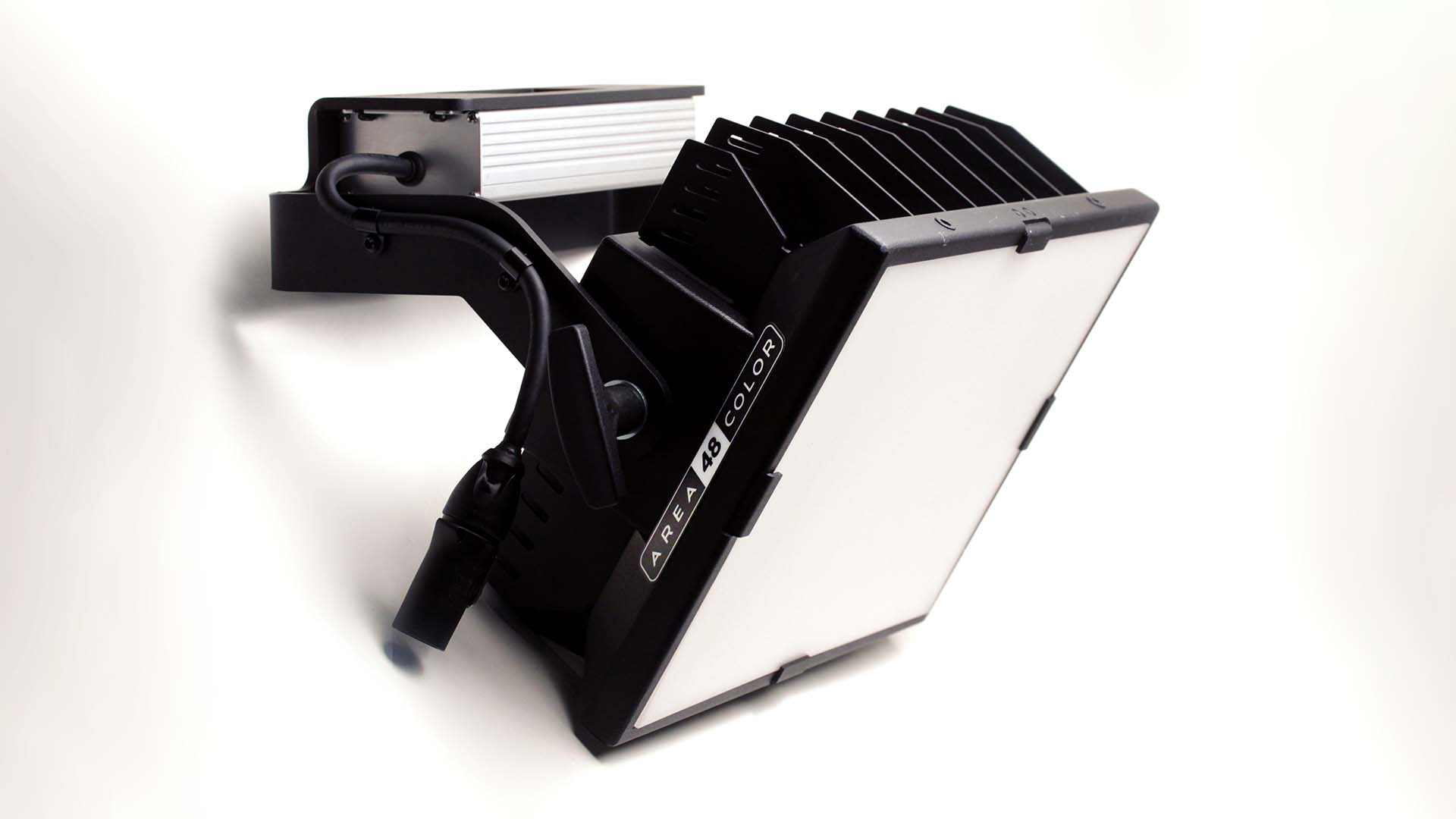 It's been a while since the Area 48 Color hit the market, so we might seem a little behind the times. However, it's taken until now to get the new firmware on a light and in a room with a colour meter. It's an enticing prospect, given the company's stellar reputation for colour quality, and something that's genuinely quite exciting to look at.

At first glance, it looks fairly conventional. We’re already well-used to its white-emitting sibling, the originbal Area 48, with its interchangeable phosphor panels. It established an enviable reputation for white light quality that the full-color version needs to maintain, so our concern is what lies beneath that unassuming shell and if it can give us both colours and good whites. 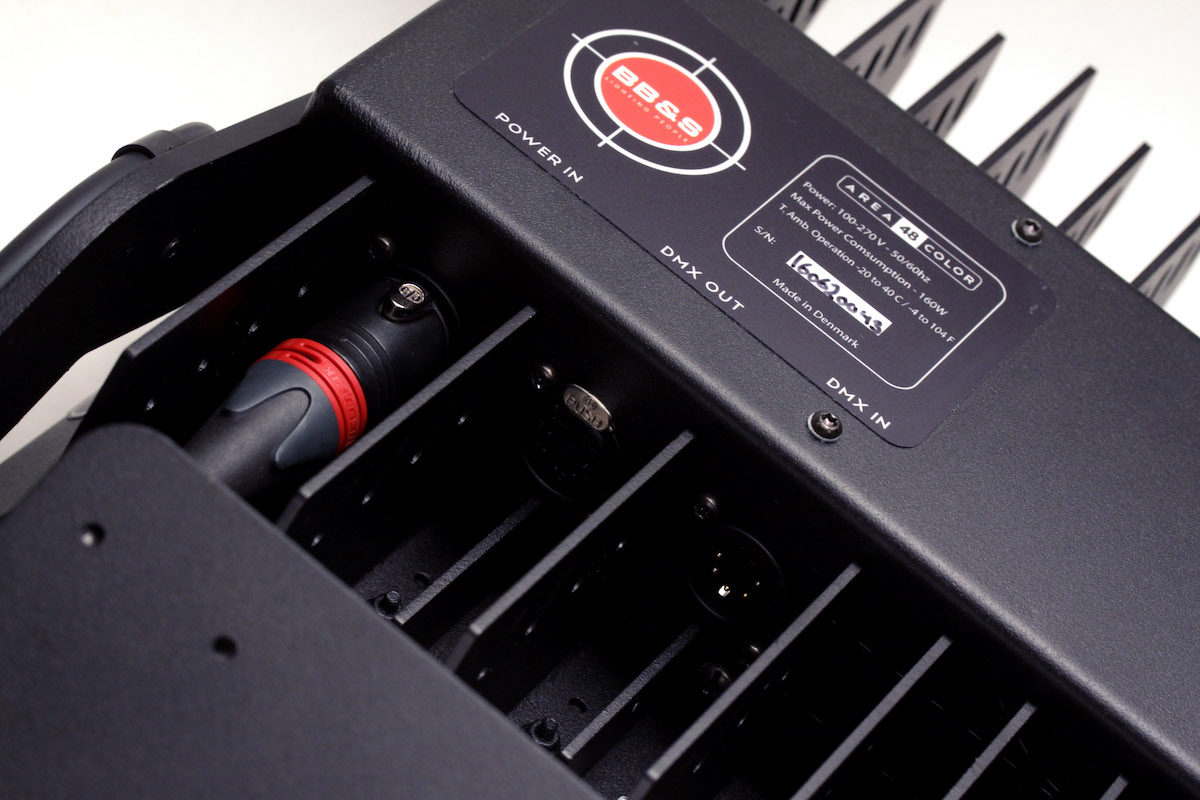 The connector area, shown with the yoke-mounted power supply connected as supplied.

The light-emitting aperture is about 210 by 300mm, or about the same size as an A4 sheet of paper. That’s two thirds the area of common foot-square panels of similar power, so the output is concentrated. The whole assembly is aluminium, with cooling fins on the back alongside power and DMX connectors and an LCD touchscreen. The power supply is mounted in on the yoke, and the unit will accept 48V DC externally.

Power levels on colour mixing devices naturally depend on the colour selected, but for reference, the popular SkyPanel S30C is a nominally 200-watt device and weighs about seven kilos without the power supply, which is another 2kg, for a total of 22W/kg. The Area 48 Color is a 160-watt device and weighs in at a svelte 4.6 kilos including the power supply; it’s also much more compact. At 35W/kg, BB&S wins the power-to-weight contest by some margin.

The menu has the usual DMX address settings, temperature and status information for the internals, and several colour modes providing white light with adjustable colour temperature, plus- and minus-green options, and saturated colours through individual control of each of the five colour channels or via HSV controls. The controls are perhaps a little too simple, as there's no gel emulation and no CIE xy coordinates, which are helpful in matching dissimilar lights. 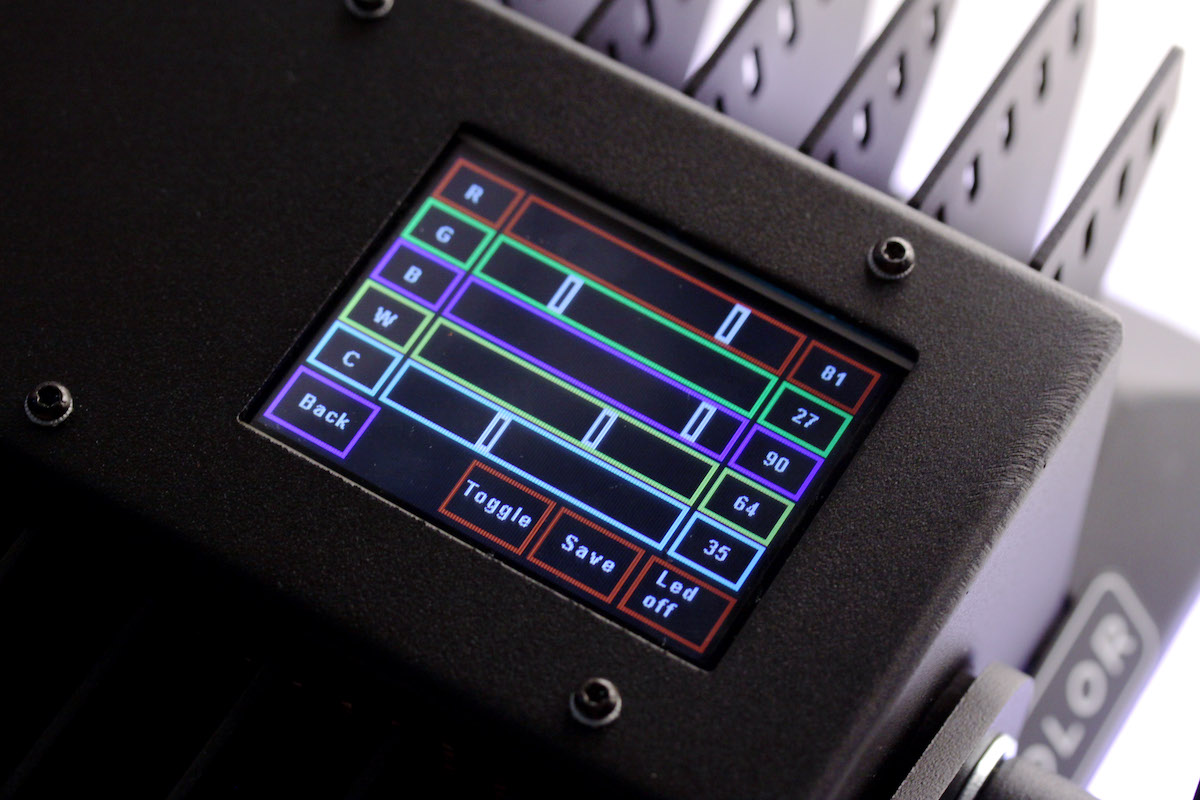 Full control over the individual LED channels is available, as is a HSV controller.

Let's talk, then, about the company's famous colour quality, which first requires a bit of background so we understand what we’re dealing with.  Simple LEDs make white light by illuminating a yellow-emitting phosphor with blue LED - a phospshor-converted (PC) LED. Phosphor-converted red, (lime) green and (very rarely) blue emitters are also available. They produce less saturated light, which sounds like a negative until we realise that the huge saturation of non-converted types can actually be a problem. PC LEDs of any kind are less likely to create complicated problems when illuminating brightly-coloured production design.

It’s tempting to make white by mixing red, green and blue, but even with PC LEDs (and even with the rare PC blues) that results in a poor spectrum that doesn’t illuminate anything but grey cards very well [https://www.redsharknews.com/technology-computing/item/2083-this-may-be-the-most-important-lesson-about-colour-you-ever-see]. Modern lighting for film and TV might have one of several general configurations, but the Area 48 Color has red, green and blue LEDs for colour control, plus two different shades of white to keep the white light quality high, a common design approach.

Measuring the output of the Area 48 Color with the UPRTek CV600 quickly reveals that (at least) a PC red emitter is in use, which we can see easily by comparing the spectrum of an example direct-emission red LED (above left) and the PC red in the Area 48 Color (right). The phosphor converted red is a broader, more rounded peak, and that shows in the pleasant reproduction of red-heavy colours.

Even at very low CCTs, colour quality is good; notice the smooth shape of the output spectrum, with the usual LED blue peak greatly minimised.

Brightness also falls off very, very slightly at the lowest available CCT, with the measured intensity falling from 4365lx at 2800K to 4185lx at 2500K. This is great; brightness varies little with CCT. CCT accuracy overall is extremely good (this is a key feature of the new firmware) and the maximum error is a trivial 600K at the 10,000K setting, a mired shift of 9, or about less than half the correction of an extremely pale one-eighth CT straw filter. Through most of the useful range the CCT error is on the order of 200K. 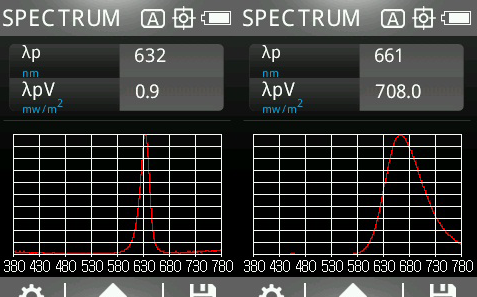 At left, a direct-emission red LED. Note the narrow spectrum, which is probably even narrower than this meter makes it look. On the right, a phosphor converted red LED from the Area 48 Colour.

The light engine setup is extremely good and capable of superb whites, though the rather elementary onboard controls, manipulated by a resistive touchscreen, make the Area 48 Color slightly less suitable for work requiring fast-paced colour manipulation (it's 4 keystrokes to get to the HSV menu from switch-on, the hue and saturation are on a different page from the brightness, and you have to be able to see the LCD to do it).

It’s not the least-expensive light around, but it’s economic compared to other high-end options. On a dollars-per-watt basis at B&H prices, the Area 48 Color ($3300) works out at $20/W, while the SkyPanel S30C ($4710) runs $23.80/W. It’s smaller, lighter and more economic than its best-known rivals yet still solidly made. The BB&S reputation for colour quality is maintained, then, because that unassuming exterior really does contain some solid technology.