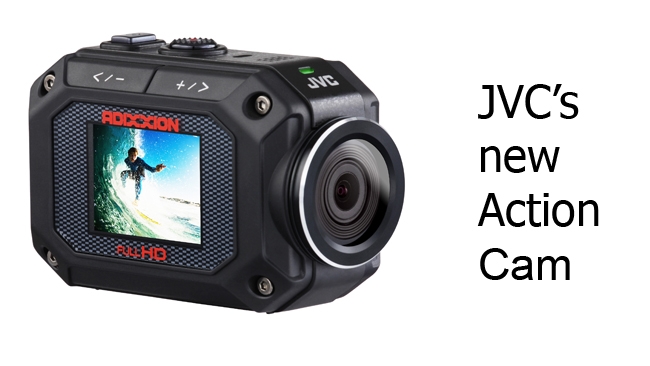 JVC announces a range of new features, including increased image quality, for the latest addition to its Action Cam range, the GC-XA2 ADIXXION, writes Kate Large

The GC-XA2 Action Cam, as its name implies, is a tough, compact camera is designed to capture action footage on the move in demanding conditions. Performance improvements in the new model include 1920x1080 60p/50p progressive Full HD recording, as well as 1280x720 high-speed recording at 120fps/100fps for 4x slow-motion playback. The new Action Cam will be met with interest by GoPro, a close competitor with its Hero 3 camera - not least as expert blogs are giving the new JVC camera excellent reviews.

The GC-XA2 comes with an upgraded optical lens, designed to be brighter and wider-angle. The F2.4 lens has an angle of 137° at 1080p/720p/WVGA modes and 152° at 960p/still picture modes. The camera's digital image stabiliser has been optimised with the use of a gyro sensor which senses movements and adjusts the stabiliser to compensate.

The camera's image sensor is now an eight megapixel back-illuminated CMOS, and the new, higher-resolution LCD monitor offers a resolution of 115k pixels. As with the original ADIXXION, the new GC-XA2 is 'quad-proof': water, shock, dust and freeze-proof with built-in LCD and wi-fi, and weighs in at a portable 135g (0.3lbs), with mounting holes on the bottom and side.

JVC says the GC-XA2 now connects more quickly to wi-fi and can function as an access point for live streaming to smartphones, the Ustream platform, and for uploading to YouTube, as well as still image transfer. Quad View is also on offer, enabling smartphone users to view video streams from four separate ADIXXION cameras simultaneously.

The GC-XA2 also offers time-lapse recording for photos as well as video. Its Burst mode takes multiple stills at up to 15 fps, and Simultaneous REC enables photo and video shooting at the same time. Creative functions include four built-in visual effects.

The JVC GC-XA2 ADIXXION will hit the shelves later this month, priced at $299.95.