Review: Blackmagic Design eGPU Pro - How much faster will your Mac go? 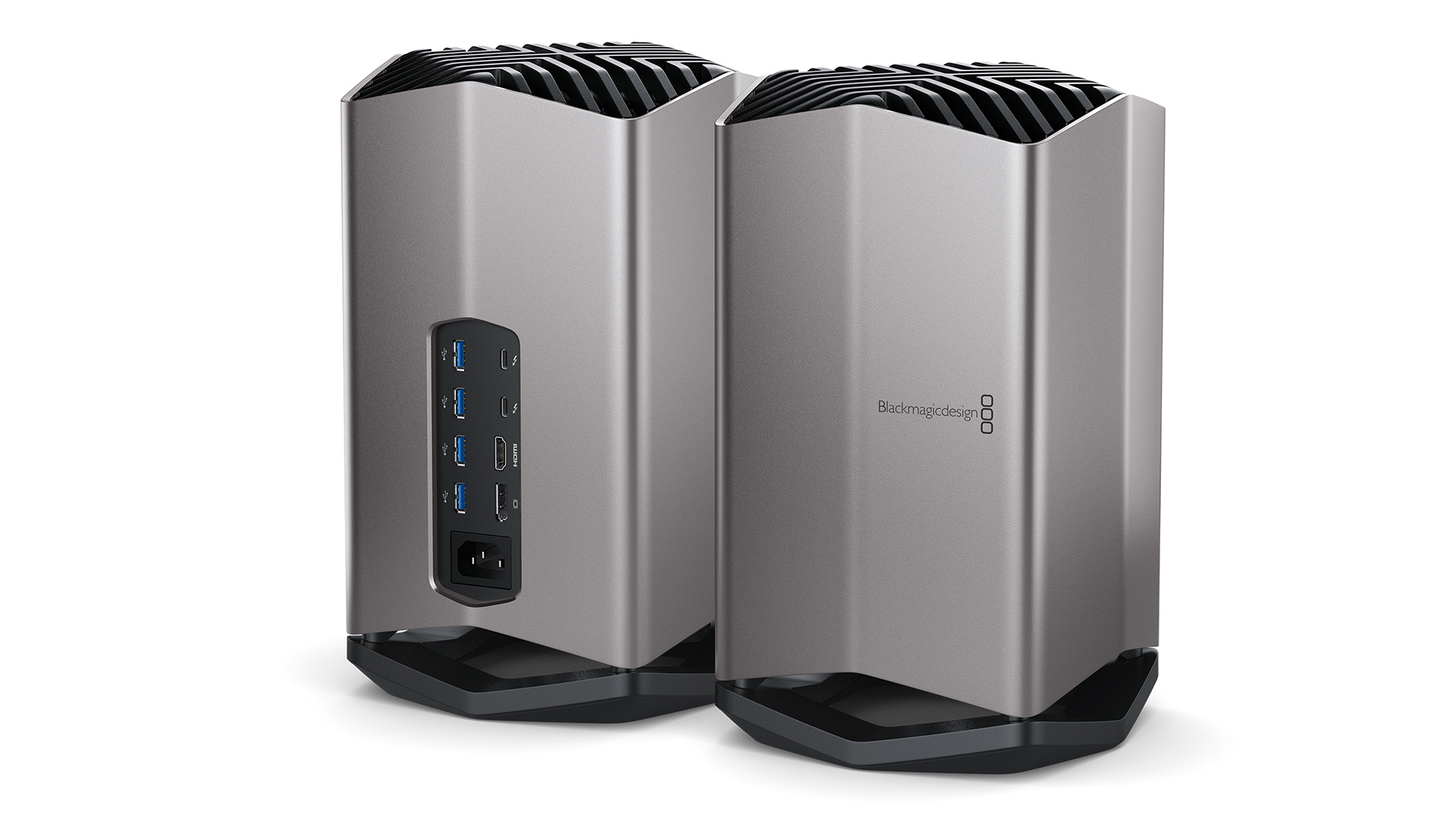 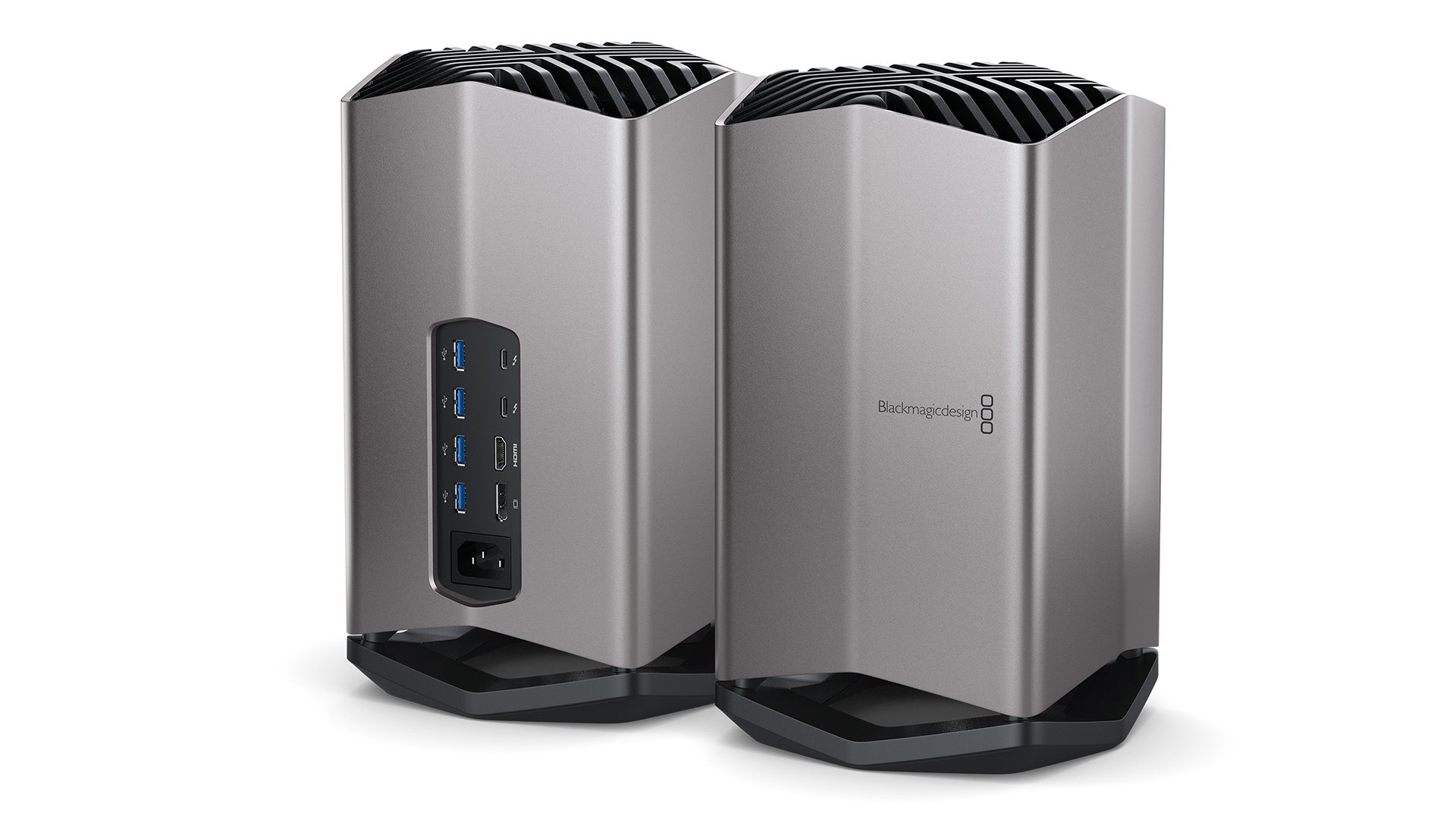 Your Mac will be much faster with an eGPU. How much faster? Read our review of the Blackmagic Design eGPU Pro to find out!

Last year Apple embraced external graphics processing units. Blackmagic Design responded with the release of its AMD-powered eGPU model. Many questioned its choice of the Radeon Pro 580 chip instead of something more powerful. That challenge has been answered with the new Blackmagic eGPU Pro. It sports the Radeon RX Vega 56 - a similar model to the one inside the base iMac Pro configuration. The two eGPU models are nearly identical in design, but in addition to more processing power, the eGPU Pro adds a DisplayPort connection that can support 5K monitors.

The eGPU Pro includes two Thunderbolt 3/USB-C ports with 85W charging capability, HMDI, DisplayPort, and four USB-A type connectors for standard USB-3.1 devices. This means you can connect multiple peripherals and displays, plus power your laptop. You'll need a Thunderbolt 3 connection from the computer and then either eGPU model becomes plug-and-play with Mojave (macOS 10.14) or later. 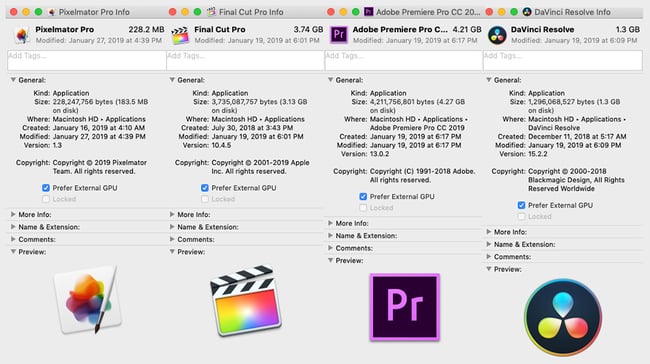 Setting up the eGPU Pro

With Mojave, most current creative apps, like Final Cut Pro X, Premiere Pro, Resolve, etc, offer a preference selection to always use the eGPU (when connected) from the application's Get Info panel. This is an "either/or" choice. The application does not combine the power of both GPUs for maximum performance. When you pull up the Activity Monitor, you can easily see that the internal GPU is loafing while the eGPU Pro does the heavy lifting during tasks such as rendering. External GPUs benefit Macs with low-end, built-in GPUs, like the 13" MacBook Pro or the Mac mini. A Blackmagic eGPU or eGPU Pro wouldn't provide an edge to the render times of an iMac Pro, for example. It wouldn't be worth the investment, unless you need one to connect additional high-resolution displays.

Users who are unfamiliar with external GPUs assume that the advantage is in faster export and render times, but that's only part of the story. Not every function of an application uses the GPU, so many factors determine rendering. External GPU technology is very much about real-time image output. An eGPU will allow more connected displays of higher resolutions than an underpowered Mac would normally support on its own. The eGPU will also improve real-time playback of effects-heavy timelines. So yes, editors will get faster exports, but they will also enjoy a more fluid editing experience. 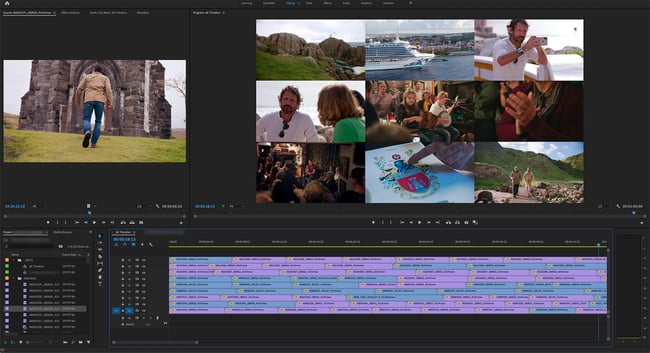 Extending the power of the Mac mini

In my Mac mini review, I concluded that a fully-loaded configuration made for a very capable editing computer. However, if you tend to use a number of effects that lean on GPU power, you will see an impact on real-time playback. For example, with the standard Intel GPU, I could add color correction, gaussian blur, and a title, and playback was generally fine with a fast drive. But, when I added a mask to the blur, it quickly dropped frames during playback. Once I connected the eGPU Pro to this same Mac Mini, such timelines played fluidly and, in fact, more effects could be layered onto clips. As in my other tests, Final Cut Pro X performed the best, but Premiere Pro and Resolve also performed solidly. 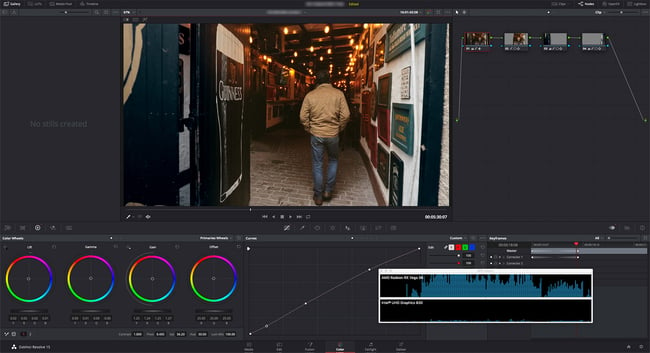 For basic rendering, I tested the same sequence that I used in the Mac mini review. This is a 9:15-long 1080p timeline made up of 4K source clips in a variety of codecs, plus scaling and color correction. I exported ProRes and H.264 master files from FCPX, Premiere Pro, and Resolve. With the eGPU Pro, times were cut in the range of 12% (FCPX) to 54% (Premiere). An inherently fast renderer, like Final Cut, gained the least by percentage, as it already exhibited the fastest times overall. Premiere Pro saw the greatest gain from the addition of the eGPU Pro. This is a major improvement over last year when Premiere didn't seem to take much advantage of the eGPU. Presumably both Apple and Adobe have optimized performance when an eGPU is present. 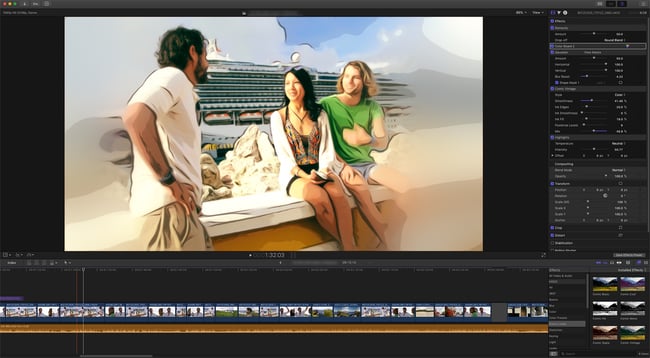 A timeline export test is real-world but may or may not tax a GPU. So, I set up a specific render test for that purpose. I created a :60 6K timeline (5760x3240) composed of a nine-screen composite of 4K clips scaled into nine 1920x1080 sections. Premiere Pro would barely play this at even 1/16th resolution using only the Intel. With the eGPU Pro, it generally played at 1/2 resolution. This was exported to a final 1080 ProRes file. During my base test (without the eGPU connected) Premiere Pro took over 31 minutes with "maximum quality" selected. A standard quality export was about eight minutes, while Final Cut Pro X took five minutes. Once I re-connected the eGPU Pro, the same timelines exported in 3:20 under all three test scenarios. That's a whopping 90% reduction in time for the most taxing condition! One last GPU-centric test was the BruceX test, which has been devised for Final Cut. The result without the eGPU was :58, but an impressive :16 when the eGPU Pro was used. 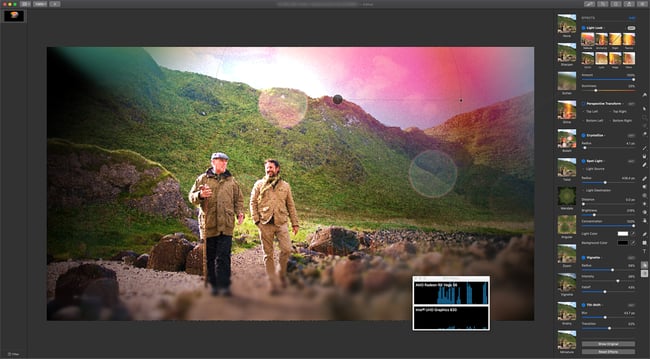 As you can see, effects-heavy work will benefit from the eGPU Pro, not only in faster renders and exports, but also improved real-time editing. This is also true of Resolve timelines with many nodes and in other graphics applications, like Pixelmater Pro. The 2018 Mac mini is a capable mid-range system when you purchase it with the advanced options. Nevertheless, users who need that extra grunt will definitely see a boost from the addition of a Blackmagic eGPU Pro.