Blackmagic Design eGPU review: A healthy dose of power for editing on the move 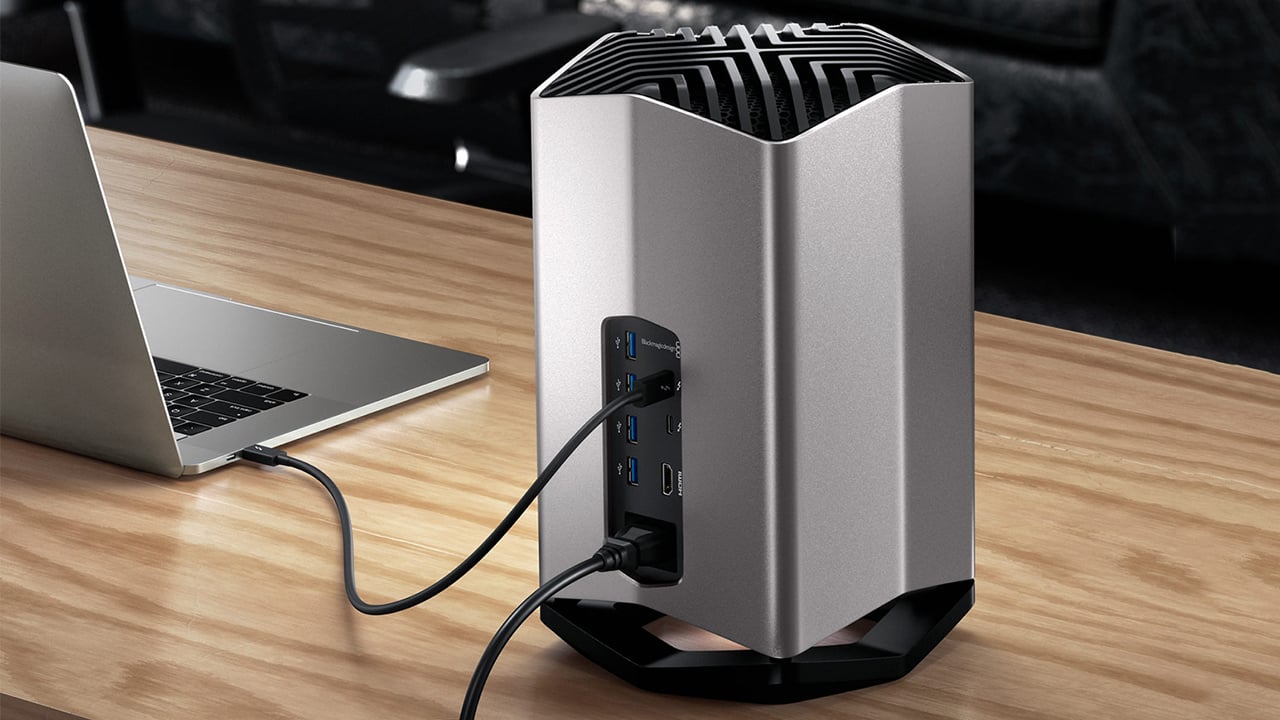 We review the Blackmagic Design eGPU to find out just how much extra speed and power you can expect to gain from it.

Power users have grown to rely on graphics processing units from AMD, Intel and Nvidia to accelerate a wide range of computational functions - from visual effect filters to gaming and 360VR, and even to bitcoin mining. Apple finally supports external GPUs, which can easily be added as plug-and-play devices without any hack. Blackmagic Design just released its own eGPU product for the Mac, which is sold exclusively through Apple ($699 USD). It requires macOS 10.13.6 or later, and a Thunderbolt 3 connection. (Thunderbolt 2, even with adapters, will not work.) 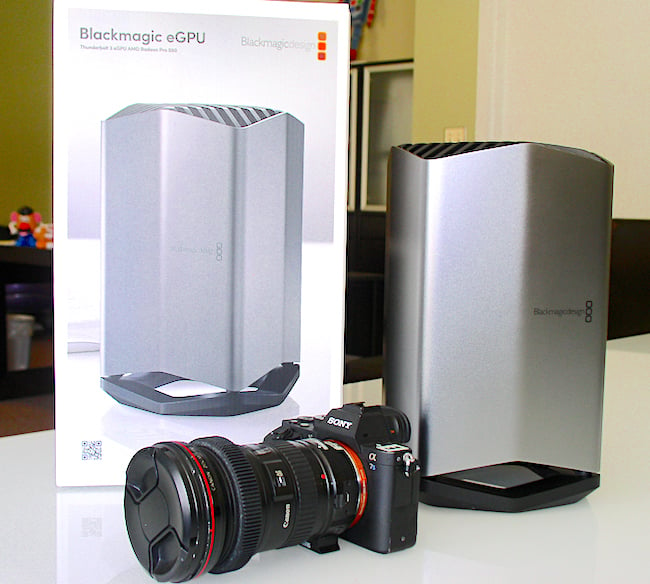 The Blackmagic eGPU features a sleek, aluminum enclosure that makes a fine piece of desk art. It’s of similar size and weight to a 2013 Mac Pro and is optimized for both cooling and low noise. The unit is built around the AMD Radeon Pro 580 GPU with 8GB of video memory. It delivers 5.5 teraflops of processing power and is the same GPU used in Apple’s top-end, 27” Retina 5K iMac. 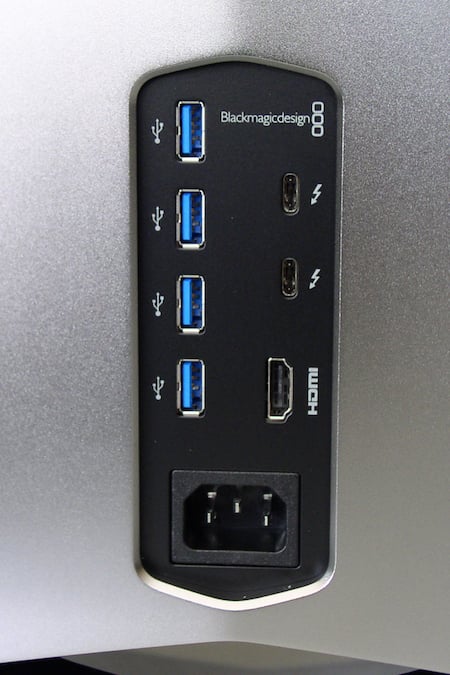 Thunderbolt 3 technology supports 40Gb/s of bandwidth, as well as power. The Blackmagic eGPU includes a beefy power supply that can also power and/or charge a connected MacBook Pro. There are two Thunderbolt 3 ports, four USB3.1 ports, and HDMI. Therefore, you can connect a Mac, two displays, plus various USB peripherals. It’s easy to think of it as an accelerator, but it is also an appliance that can be useful in other ways to extend the connectivity and performance of MacBook Pros. Competing products with the same Radeon 580 GPU may be a bit less expensive, but they don’t offer this level of connectivity.

Apple and Blackmagic both promote eGPUs as an add-on for laptops, but any Thunderbolt 3 Mac qualifies. I tested the Blackmagic eGPU with both a high-end iMac Pro and the base model 13” 2018 MacBook Pro with touch bar. This model iMac Pro is configured with the more advanced Vega Pro 64 GPU (16GB VRAM). Installation of the eGPU was simply a matter of plugging it in. A top menu icon appears on the Mac screen to let you know it’s there and so you can disconnect the unit while the Mac is powered up.

Pushing the boundaries through testing

My focus is editing and color correction and not gaming or VR. Therefore, I ran tests with and without the eGPU, using Final Cut Pro X, Premiere Pro, and DaVinci Resolve (Resolve Studio 15 beta). Anamorphic ARRI Alexa ProRes 4444 camera files (2880x2160, native / 5760x2160 pixels, unsqueezed) were cut into 2K DCI (Resolve) and/or 4K DCI (FCPX, Premiere Pro) sequences. This meant that every clip got a Log-C LUT and color correction, as well as aspect ratio correction and scaling. In order to really stress the system, I added several GPU-accelerated effect filters, like glow, film grain, and so on. Finally, timed exports went back to ProRes 4444 - using the internal SSD for media and render files to avoid storage bottlenecks. 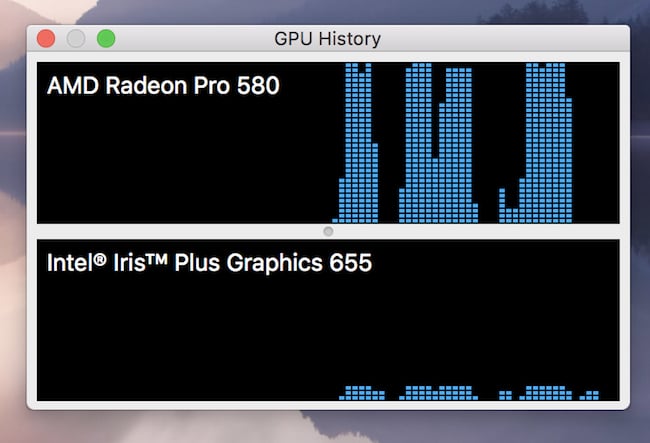 DaVinci Resolve on the other hand utilises it fully. Here seen on a 13" MacBook Pro.

Not many applications take advantage of this newfound power, yet. Neither FCPX nor Premiere utilize the eGPU correctly or even at all. In my tests, only DaVinci Resolve gained measurable acceleration from the eGPU, which also held true for a competing eGPU that I compared. If editing, grading or possibly location DIT work is your main interest, then consider the Blackmagic eGPU a good accessory for DaVinci Resolve running on a MacBook Pro. As a general rule, lesser-powered machines benefit more from eGPU acceleration than powerful ones, like the iMac Pro, with its already-powerful Vega Pro 64 GPU.

Power for the on-the-go editor and colorist

The 13” MacBook Pro is where the Blackmagic eGPU makes the most sense. It gives you better performance with faster exports, and adds badly-needed connectivity. My test Resolve sequence is a lot more stressful than I would normally create. When I ran the test on the laptop without the eGPU connected, it would barely play at all. Exports at source resolution rendered at around 1fps. Once I added the Blackmagic eGPU, this sequence played in real-time, although the viewer would start to drop frames towards the end of each shot. Exports at the source resolution averaged 5.5fps. At timeline resolution (2K DCI) it rendered at up to 17fps, as opposed to 4fps without it. That’s over 4X improvement. 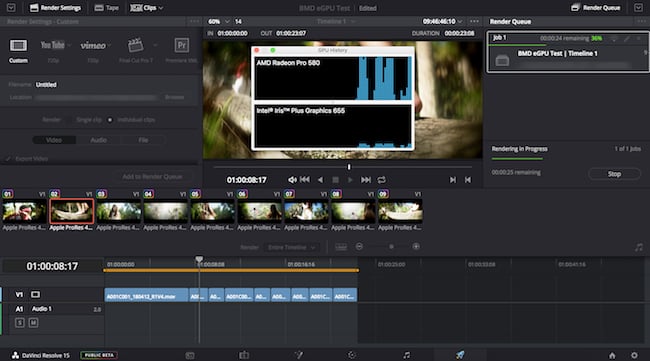 Everyone’s set of formats and use of color correction and filters are different. Nevertheless, once you add the Blackmagic eGPU to this MacBook Pro model, functionality in Resolve goes from insanely slow to definitely useable. If you intend to do reliable color correction using Resolve, then a Thunderbolt 3 UltraStudio HD Mini or 4K Extreme 3 is also required for proper video monitoring. Resolve doesn’t send video signals over HDMI, like Premiere Pro and Final Cut Pro X can.

It will be interesting to see if Blackmagic also offers a second eGPU model with the higher-end chip in the future. But that would likely double the price of the unit. In the testing I’ve done with other eGPUs, I’m not convinced that such a product would deliver 2X more performance to justify the cost. This Blackmagic eGPU adds a healthy dose of power and connectivity for current MacBook Pro users and that will only get better in the future.