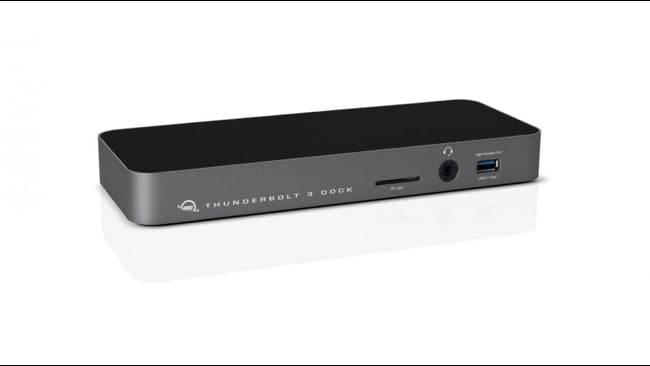 RedShark Review: OWC’s Thunderbolt 3 dock has no less than 13 ports, all of which represent OWC’s experience with users’ needs in terms of support for legacy technology.

I always imagined OWC to be a company that doesn't give a hoot about design — you know, the kind of business that packs its products in dull-brown cardboard boxes with an ordinary sticker on the side to show what’s inside. The packaging actually surprised me as it was everything you’d expect from a company selling to professional Mac users: carefully designed to appeal to our artistic instincts. Better yet, the dock itself has a great design, with a glossy surface and a space grey bezel. But most important of all: it’s a great expansion box.

The OWC Thunderbolt 3 dock comes with a 0.5 m Thunderbolt 3 40Gb/s USB Type-C cable. Its 13 ports have been chosen to best support your legacy equipment. Besides the two Thunderbolt 3 USB Type-C ports on the rear side, you’ll find one mini DisplayPort, four USB 3.1 Gen 1 Standard-A ports (with one supporting high-power output), a Gigabit Ethernet port, an S/PDIF digital audio port for output and a FireWire 800 port. The front side is home to one USB 3.1 Gen 1 type-A port, which also supports iPad charging, a very useful and fast SD 3.0 media card reader and a hybrid 3.5 mm headphone/mic jack.

The Thunderbolt 3 ports support video pass-through, supporting up to 4K/60Hz monitors. The mini DisplayPort 1.2 port supports 2K or 4K screens at 60Hz, so in total — and as with most Thunderbolt 3 docks worthy of that name — you can hook up two 60fps 4K displays. And of course you can also connect one 5K Thunderbolt 3 display.

The dock performed as advertised and I didn’t miss any of the other ports some docks have, like HDMI or a full-sized DisplayPort. Far from it, I was very happy with the mini DisplayPort as that meant I could connect (via adapter) an HP display I purchased a couple of years ago. The SD-card port is a boon as well. It’s faster to just plug in a microSD card into an adapter into the OWC card slot, than plugging in the — furthermore excellent — Lexar card reader when I only have one card to read.

The Thunderbolt 3 port made my Thunderbolt 3 compatible CalDigit Tuff test unit reach its highest speed. I also found the generous number of USB type-A ports to be better suited to the work I do than other ports I’ve tested. Heck, even a Thunderbolt 1 RAID system worked perfectly, using Apple’s Thunderbolt 3 to Thunderbolt adapter.

In short, The OWC Thunderbolt 3 dock so far has been the best port extension device I’ve come across — regardless of it being a Thunderbolt 1, 2 or 3 dock. Even if you don’t yet have a Thunderbolt 3 Mac, you can’t go wrong with this one. It costs $299.