Expect the unexpected: Why we didn't see the Canon 8K Cinema Camera coming 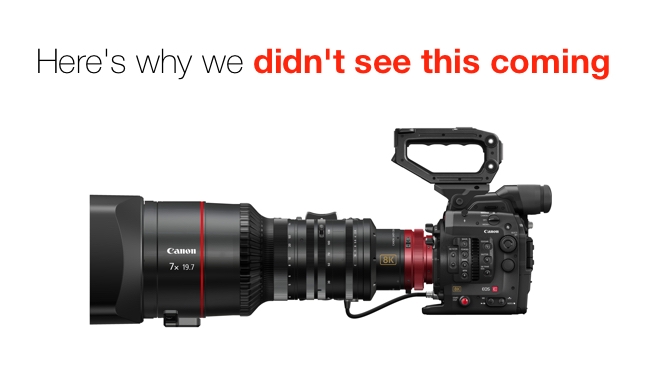 Technology is improving so fast, we're losing our ability to make predictions.

We said this before this year’s NAB, and we’re saying it again now, just before IBC. Expect surprises.

A few years before I was born, it was normal to buy something for the house - a kettle, or maybe even a radio - and then, when it went wrong, you’d get it repaired, or you’d go back to the shop after, say, five or seven years, and and buy a new one. The incredible thing is that you’d probably buy exactly the same model! Can you imagine that happening today with smartphones or televisions?

Seven years ago, HD had only just become mainstream. Only a few years before that we were transitioning between CRT TVs and flat screens. It took between twenty and thirty years to go from black and white to colour TV (Colour came to Europe ten years later than in the US). It took about forty years to go from SD to HD. HD to 4K arguably took ten years (if you define it by availability of 4K from the broadcasters - in the UK, two of the top providers, Sky and BT, launched their 4K set-top boxes last month). In some shops, already, more than half of the TVs in the showrooms are 4K.

And eight years ago, the first iPhone appeared. The iPhone 6s will be a hundred times more powerful than the original.

Meanwhile we have cameras like the Blackmagic URSA Mini and the Sony FS7 redefining what you can do with a camera that costs less than anyone would have dreamed ten years ago.

In June, Sony revealed the A7R mk II. This wasn’t completely unexpected - but most people thought we’d see an upgrade to what is primarily a still camera. What we actually got was a mirrorless device with massive video capability. It was the surprise of the year: a 42 megapixel camera that could can shoot a super 35mm cropped, supersampled 4K movie and store it internally. It’s in the shops and people are already buying it. And this week, Canon announced their forthcoming 8K Cinema camera. It was completely unexpected.

There is a very good, rational, explanation why we are being surprised like this, in a way that hasn’t happened before. It’s because the technology curve is now so steep that from our perspective, it seems vertical. Let me explain what I mean by this.

For centuries, we’ve made progress, but, apart from the various “revolutions”: agricultural, industrial; mass production, etc, it’s been pretty steady. You could almost mistake it for a straight line, and most people do. They think the future is one with better technology, but that it’s approaching steadily. This linear view of progress is wrong.

This century, we’re going to see more technological progress than in the last twenty centuries. The next ten years will bring more innovation than the last hundred. This isn’t just Moore’s law, it’s the coming together of all sorts of technologies. It started, perhaps, with Kodak, a company synonymous with film, that has been all but decimated by digital photography. That took a relatively long time. But now, this type of disruption happens almost overnight. Uber, the app that lets you summon a car and driver from your phone, is sweeping across the world and changing the way we move around cities. In London, there are more Uber cars than traditional black cabs. The Uber ecosystem is built on smartphone technology. It’s because smartphones are so highly integrated, with radio, GPS, quite a lot of computing power, and a touchscreen display, that Uber was able to build an app so quickly that does so much. Who would have thought that a telephone would be so disruptive to taxis, an apparently unrelated business. Somehow, the taxi companies didn’t see it coming. If they had, they would have built their own version first.

So, precisely because the technology curve is now almost vertical, we will increasingly see new products that we weren’t expecting. A vertical curve means that we see massive improvements and innovations on a very short timescale.

That’s why two major trade shows per year is barely enough. It used to be that IBC was the first chance for Europeans to see the stuff that was announced at NAB. Now, it’s as much of a launchpad for new products as NAB.

A few years ago, it was perfectly reasonable to try to guess what was going to happen in three or even five years time. But now, it would be foolish - not to say impossible, to make any predictions more than a year ahead.