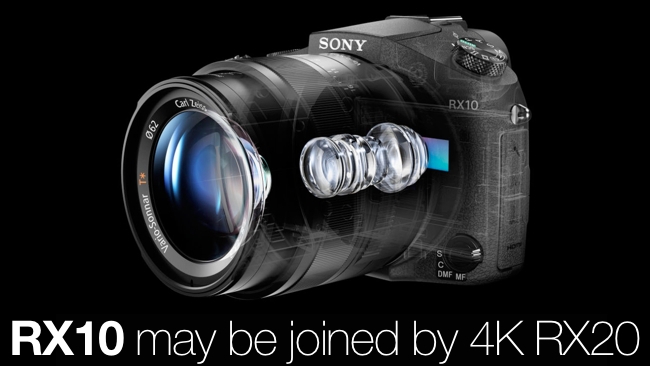 For a long time we've thought that the Sony RX10 might be capable of 4K with a firmware upgrade. Now there are rumors that there will be an RX20 - essentially the same but with 4K

Sony has some extraordinary chipsets around which it builds its current generation of cameras. We're slowly seeing Sony's high-quality recording codec, XAVC, being rolled out across several of their products. What these devices also share is a 1" sensor, and Bionz X processor that can comfortably handle downscaling from all the 20 megapixels on the sensor to either HD or - yes - 4K.

The Sony RX10 seemingly has all the right elements in place to handle 4K, but now it seems, if this rumor is correct, that Sony might be considering bringing out a new model, rather than upgrading the existing one. Existing RX10 owners (like us!) might be hoping for an upgrade, but new models have been brought out for lesser reasons, so we don't hold out much hope.

For those who haven't yet bought an RX10, the RX20 might look like a good bet, as long as the price differential isn't too great. As PetaPixel points out, (also as a response to this Sony Alpha Rumors report) this could be a reaction to Panasonic's FZ100, but it's also possible that Sony might have planned this all along.

If indeed they are planning it: we don't know that yet, but this does have a ring of plausibility about it!

Read our original review of the Sony RX10 here