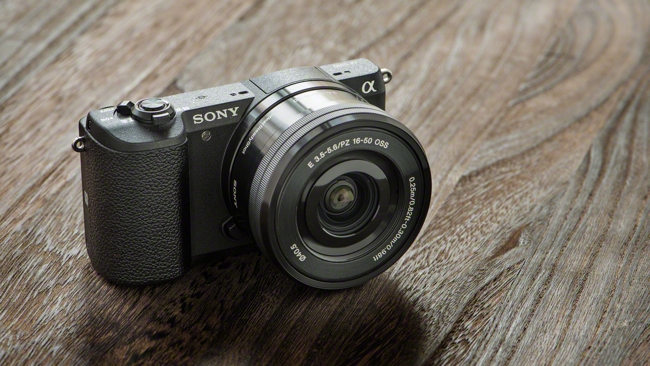 The new a5100 from Sony is tiny and well priced, and, with some reservations, is great for video

With Photokina (the world's biggest photography trade show in Cologne, Germany) just a month away, it's no surprise that we're starting to see a rash of new cameras. While some manufacturers like to keep their announcements for the show, there's always a danger that they'll be lost in a fog of new products - so releasing news about them before the show might be a smart strategy.

Sony's a5100 is a descendent of the NEX series, but doesn't use that naming system.

Its sensor is an APS C size chip with 24.3 effective megapixels. It's similar to the a6000, inheriting the 179 point phase detection autofocus system. The new camera uses E-mount lenses.

What it doesn't have, though, is a viewfinder, which will be a deal-breaker for some, but won't be missed by anyone who's at home with taking pictures on a smartphone. The rear screen is touch sensitive.

Video should be very good indeed, because alongside the high resolution sensor is a BIONZ X image processor. This is the same chip that's landing in a lot of new Sony cameras and one of its characteristics is that it is fast enough to downsample  a video image using information from all the pixels in a high resolution sensor. This may well be the case with the a5100, but we haven't seen confirmation of this anywhere.

Increasingly, Sony is rolling out its more professional codecs to its smaller, cheaper cameras. The a5100 comes with the consumer-oriented derivative of XAVC, XAVC-S, which is essentially XAVC wrapped in an MP4 container instead of an MXF one. Recording is possible up to 50 Mbit/s, which should result in very clean-looking images. You'll be able to record in AVCHD at the same time for easier sharing.

From a still photographer's point of view, why would you want a microphone input in a still camera? But if you want to make serious video, it's best to audio on the camera, in sync - but you can't do that with the a5100. There's no audio input.

There is, however, a built-in microphone, which you can use in emergencies.

We'll be interested to test the video quality of this little camera when we get one.

The a5100 is so small, and looks so much like a still camera, that it could have a role to play for a professional who wants to be able to take high quality video inconspicuously.

Price is £550 / $700 including kit lens and it should be available in September.

Read Sony's press release in full after the brreak

Fitting snugly in your hand, the α5100 is the world’s smallest interchangeable-lens digital camera that boasts a big APS-C sensor plus a built-in flash and Wi-Fi. Despite its svelte dimensions, it’s every inch the serious choice for anyone who’s moving up from their smartphone’s camera or point-and-shoot compact snapper.

Nothing gets past the blazing Fast Hybrid AF system of the α5100, the same that can be found in the α6000, with 179 phase detection points that freeze rapid action, frame after crisply-focused frame. Even fast-paced targets – like blistering penalty shots or lively pets – are tracked faithfully for blur-free results. Grabbing the moment is easier still with Touch Focus and Touch Shutter. Just touch your subject anywhere on the crisp, bright LCD screen to fire the shutter for pin-sharp shots at your fingertips.

Video recording is stunning, capitalising on the sensitivity and detail of the α5100 for smooth, cinematic results. Support for the increasingly popular pro-focused XAVC S format at 50 Mbps ensures spectacular Full HD footage with fabulous sound to match. Just like still shooting, Fast Hybrid AF assures pin-sharp focus that tracks your subject, plus the extra convenience of Touch Focus.

It might be the world’s smallest interchangeable lens camera, but the α5100 packs in plenty of thoughtful touches to make everyday shots simple.

Flip the large LCD screen through 180° and hold the ergonomically-styled camera body comfortably at arm’s length. Frame yourself with the conveniently positioned zoom lever: then release the shutter for great selfies.

PlayMemories Camera Apps from Sony expand the possibilities of the α5100 further still. Download a growing range of free and paid-for apps that include handy utilities, fun effects and impressive creative tools for serious photographers.

The light, easy to use α5100 interchangeable lens camera from Sony is available to pre-order now from www.sony.co.uk. It’s on general sale in Europe from Mid-September 2014.

Full technical specifications after the break