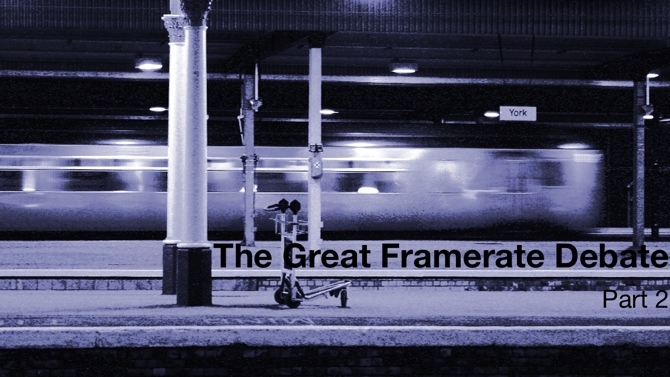 Last time, we looked at why we ended up with 24 frames per second for narrative filmmaking. Having recovered from the shock of realising that it wasn’t actually chosen for any reason to do with the picture at all, it’s worth looking at the fallout of that historical decision and how it affects us today.

Part 1 of this three part series is here

If you'd like to contribute to this debate, please email editor@redsharknews.com. We'll print the best responses.

It’s the most obvious thing in the world that people like 24p for drama because they’re habituated to the slight unreality of imperfect motion rendering and the way it provides a degree of distance that aids suspension of disbelief. Any number of arguments can be made against this, from the fact that the prejudices of the audience should not limit an artform to the unimpeachable observation that poor motion rendering is a technical flaw – which it is. Nevertheless, for the majority of mainstream commercial filmmaking, it seems likely that 24fps will remain commonplace for the forseeable future.

This isn’t to say that nobody has ever thought about this before. Apart from the current experiments by Jackson and Cameron, television has of course been providing alternate frame rates for decades, and even on film, formats like Showscan made it possible for people to experience high frame rate material from the late 70s onward.

Showscan is interesting because its development represented the first organised attempts to evaluate the response of the human visual system – which, after all, did not evolve to view still picture sequences - to material at various frame rates. It was found, and has since been largely confirmed, that we stop being able to tell the difference once the rate goes somewhere north of 60 frames per second. This is interesting for technical reasons, because during any transition to a high frame rate future, we would need to be able to produce 24p material from our high frame rate master. This strongly suggests 48fps as an interim rate, because 24fps can be derived from it simply by omitting every other frame (though it may be necessary to add computer-generated motion blur to prevent strobing due to the short effective shutter time). However, 48fps, while clearly and obviously different to 24, is not quite enough to satisfy the human optical requirement for 60 or more, and may not realise all the benefits. It is possible to derive 24fps from 60, but the process inevitably requires optical-flow interpolation which is complex and therefore expensive, and may be unreliable.

Regardless of the excellent (in the case of Showscan, Oscar-winning) work that’s been done in the movie theatre, though, the principal point of comparison for film frame rates remains television. For the first few decades of motion picture filmmaking, most people had never seen television, and had no point of comparison. Most electronic television systems initially used the local alternating-current mains frequency as a synchronising signal, and so the choice of frame rate was no more of an aesthetic choice than it had been with film – it was, again, an engineering decision. As we saw in our previous discussion on interlacing, the apparent motion rendering performance of an interlaced video signal is, broadly speaking, twice as good as its base frame rate would suggest, which accounts for most of the visible differences in motion between film and video.

There are other factors, though, which we’ll discuss next time.

Part 1 of this three part series is here

If you'd like to contribute to this debate, please email editor@redsharknews.com. We'll print the best responses.