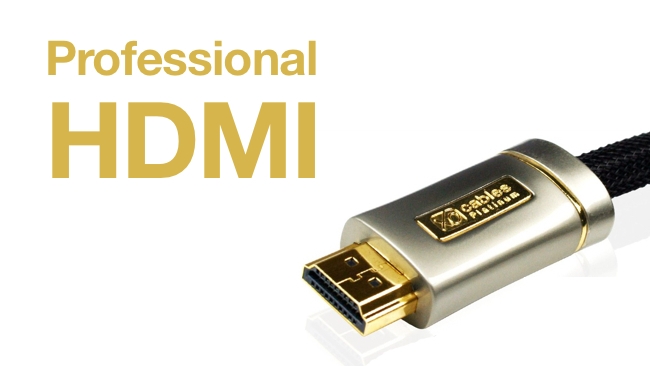 Atomos, the maker of the famous Ninja HDMI recorders, are offering their HDMI Stop/Start and Timecode extensions as an open standard for other manufacturers to use

This all started with the Sony FS100 camera, which implemented Start/Stop and Timecode through its HDMI. Atomos made their recorders work with this and the technique has now spread through most of the HDMI-outputting cameras across a range of manufacturers.

Atomos says that this has made HDMI professional, and even that the consumer-oriented connector is snapping at the heels of the older SDI standard.

One way in which HDMI is significantly inferior to SDI is that it lacks the locking connectors of the senior digital interchange format.

To compensate for this, Atomos has announced that it is making a set of "professional" HDMI connectors that fit more securely. These will be especially useful for their ultra-lightweight Ninja Star recorder, which will inevitably be subject to rough handling and vibration.

You can read Atmos's press release below

Melbourne, Australia – 4th August 2014: Atomos today announce a move to standardize HDMI for the professional video industry by focusing on ease of use and customer experience. With in-depth experience along with their technical know-how, Atomos aim to help define industry standards.

SDI has ruled the professional video space for over 25 years, built on a backbone of dependability and control. The prevalence of HDMI in consumer electronics and the DSLR revolution created by Canon's 5D Mark II/III, Nikon's D800 and followed more recently by Sony and Panasonic's revolutionary 4K mirrorless cameras has made HDMI the default connection for video professionals. Until now, however many of the advantages presented by SDI have been missing from HDMI.

One of the big advantages of SDI over HDMI has been auto triggering and timecode communication between cameras and external devices like monitors and recorders. Atomos, the company that are famous for making life easier for professionals, have now made HDMI more usable and one step closer to the SDI standard by implementing auto start/stop trigger and timecode over HDMI. With this standard, users can connect using HDMI and automatically trigger functions on external devices from the camera itself, just as they have for years with SDI.

"We are very proud to be defining a new standard in such an established market place. We love HDMI, but as it gets more popular on the camera side we need to help make it work in the pro world." said Jeromy Young, CEO and Founder of Atomos, "Historically this has only been achieved in the tech industry by creating an open standard... which is what we've done"

Atomos was the first company to engineer auto HDMI start/stop and timecode communication with cameras. Initially with Sony in 2011 for the FS100 followed up with Canon in 2013, for the 5D Mark III, 1DC and C100. Currently almost all professional Sony and Canon HDMI Cameras including the A7S employ this protocol. As the popularity of Atomos external monitor/recorders has grown, demand for this connection has spread quickly to all camera manufacturers. Now with an open, free and available standard this transition can happen quickly and easily.

"Initially we developed these cables purely to support the Ninja Star, our lightweight, pocket size ProRes recorder", said Jeromy Young, "but after consulting with our user base we soon discovered no one had yet developed a complete range of HDMI cables purely for ProVideo users in our space"