Some very good new Sound AND Video devices: Pix 270i and 250i 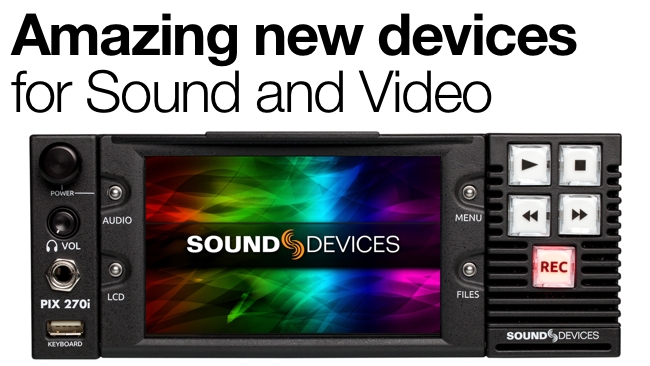 Sound Devices used to be the perfect name for a company that makes devices that do sound. You can only admire their resolve and tenacity in resisting the temptation to rename their company when they stared making devices that do video as well.

But it hasn't held them back at all, because they've just announced two new Video Devices, both of them variants on the theme of rack-mountable (as opposed to camera-mountable) video recorders - which also have an eyebrow-raising audio capability as well.

The systems allow for multiple drives, which in turn permits high data-rate recording. What this means in practise is that 3G SDI and 4:4:4 recording are supported as well.

The full details are given in the press release below, but our first impression of these recorders is that they're upmarket products, with almost endless connectivity. They're designed to be used in scalable environments where there might be multi-camera setups. The audio capabilities are astonishing, with 64 channels on the 270i and 16 on the 250i.

All the details are given in the full press release below

LAS VEGAS, APRIL 2, 2014 — Sound Devices, specialists in audio and video products for production, introduces its latest PIX recorders, PIX 270i and PIX 250i, at the 2014 NAB Show (Booth C2546). PIX 270i and PIX 250i seamlessly replace tape- and disc-based video decks for a complete offering that addresses a range of multiple-source video productions, including fast-paced, mission-critical studio applications, live sports and events, and mobile production.

The PIX 270i and PIX 250i recorders offer significant advantages and time-savings to production workflows, providing tapeless, file-based recording and playback with the ability to access and transfer high-quality files over Ethernet. The units record edit-ready Apple ProRes or Avid DNxHD files and allow simultaneous multiple-drive recording, giving production staff peace of mind with their rock-solid redundancy and backup capabilities (four drives for PIX 270i and two drives for 250i). Their extensive audio capabilities, including 64 channels of both MADI audio and Dante audio-over-Ethernet for PIX 270i, and PIX 250i’s 16 tracks of audio, make each unit a comprehensive, cost-effective replacement for complex video servers and an effective tool for high-performance video production.

Both products feature extensive network connectivity and can be connected over Ethernet for simultaneous grouped recording and playback, creating a cost-effective scalable solution that addresses the multi-camera recording needs of today’s production. Its built-in Web server, PIXNet offers browser-based transport and setup-menu control of any number of units. In addition, PIX 270i features built-in multiple unit synchronization, offering simultaneous, frame-accurate recording and playback, ideal for multi-camera production and live event multi-screen playback. Any number of units can be grouped and controlled as a single system from either the hardware or the built-in Web-based control panel. Frame accurate sync works with other PIX 260i and PIX 270i recorders. The PIX 250i can be grouped with other PIX 250i, PIX 260i and PIX 270i recorders. The PIX can also be controlled by external RS-422 (Sony 9-pin compatible) controllers as well as via its GPIO port.

With its built-in Ambient Clockit time-code generator/reader with genlock output, the PIX line is designed for multiple-camera and double-system sound applications. In addition to generating ultra-stable time-code, time-code can be read from the SDI stream, the HDMI stream or external sources. PIX 270i and PIX 250i include a high-performance hardware scaler and frame-rate converter. Regardless of the incoming signal, PIX records the signal after up-, down- or cross-conversion at the same or different frame rate. Hardware-based 3:2 pull-down removal is also available. Its convenient 1/2-rack, 2-U chassis dimension allows it to be easily integrated into any existing environment. It is powered by 10-27 VDC through a four-pin XLR connector. The PIX 270i offers a secondary DC input for power supply redundancy.

The newest additions to the PIX line of products feature Sound Devices’ proprietary PowerSafe technology. PowerSafe circuitry has a built-in 10-second power reserve. In the event of power loss the unit continues to operate for up to 10 seconds, then stops any file operation and shuts down. This ensures that a complete power loss has no effect on the recording.

Both the PIX 270i and PIX 250i have precision five-inch IPS, 800- x 480-pixel displays for setup menu access and video monitoring. The high-accuracy display, with its peaking, false color and zoom functions, is perfect for framing, exposure and focus evaluation.