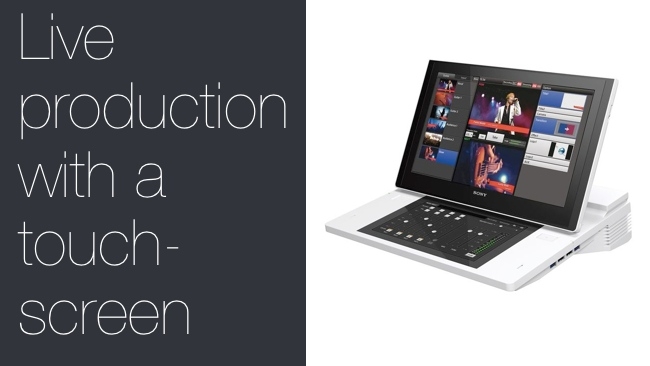 Sony’s latest entry into the switching market was first shown at NAB 2013 – the Anycast Touch. With availability scheduled for later this year we had the opportunity of putting a pre-production unit through its paces. Mark Johnson reports

The unit is described by Sony as an “all-in-one live production solution”. In today's connected world of live video streaming this means it can switch, record, stream, feed projectors and add effects. With this unit, a couple of cameras, a computer (for presentation material) and an internet connection you can easily record and stream straightforward productions including adding titles, bugs (logos as you frequently see in the top right or left of your television screen) and inserting videos.

The key word is ‘easily’. With target audiences of education, government and corporates Sony developed a simple intuitive interface, combined with two touch screens that deliver simple operation that can be quickly picked up by occasional users.

Pan Tilt Zoom (PTZ) cameras are supported via a VISCA interface and the unit has a nice interface for setting, saving and switching to pre-sets.

Outputs are HD/SD SDI, HDMI or VGA so there is plenty of flexibility for feeding projectors and monitors in the venue.

A wide variety of templates are provided for creating titles and these can be done during the event if required. Titles, images and video clips can be easily imported before the production from a USB drive or memory stick. We transferred some of our exiting lower third graphics with alpha channel as a test and they just worked.

Like any pre-production level unit there were a few problems (especially fan noise) but Sony were already aware of them and I would expect these to be fixed in the production units.

Overall a compact portable system for straightforward productions with a simple user interface for those with little or no previous switching experience.