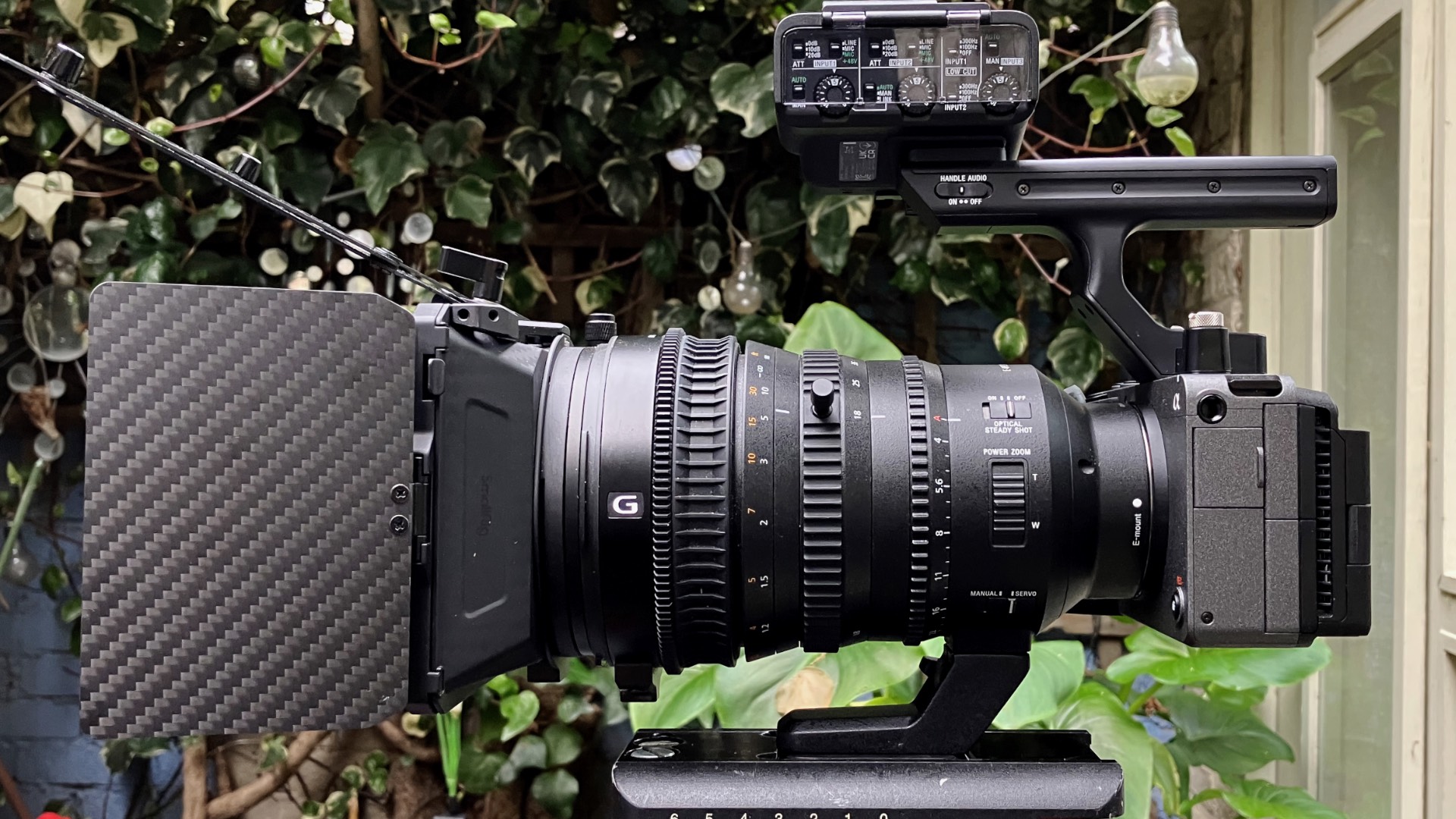 3 minute read
Does my zoom look big in this? The FX30 with Sony 18-110mm zoom and SmallRig matte box.

In part one of his two-part review, Roland Denning unboxes a brand new Sony FX30 and finds a lot to like about the company's new entry level to its Cinema Line.

Sony’s Cinema Line now consists of six cameras – Venice, FX9, FR7, FX6, FX3 and FX30. What makes the FX30 unique is that, as well as being by far the cheapest (at £2100 including VAT, it’s around a thirtieth of the cost of the Venice and less than 2/3 of the FX3), it is the only Cinema Line camera with an S35 sensor (or, as Sony prefers to call it, APS-C). Yes, you can put a S35 lens on any of the Cinema Line cameras and work with a cropped sensor, but on the FX3, FX6 and FR7 you are limited to HD. This immediately attracted me to the FX30.

As I have said many times, for the work I do S35 is a much more viable sensor size than FF. I generally don’t want massively shallow depth of field and I like working with compact and long range zoom lenses. The vast majority of movies since the turn of century have been and still are being shot in the 35mm format and it’s going to be with us for a long time yet.

You can think of the FX30 as a bargain entry point into the Cinema Line range or a competitor to the BlackMagic Pocket range, but its real strength is as a companion camera to an FX9 or FX6, or maybe even as a crash camera if you are shooting a feature.

But is it really a cinema camera?

As we all know, you can shoot a feature on anything – perfectly respectable movies have been shot on iPhones, a clockwork Bolex, MiniDV and toy cameras. But if we think of a cinema camera as one that traditional feature crew clusters around – no, it’s certainly not one of those and ‘cinema’ in this context is simply a marketing term. But the FX30 does offer most of the same codecs in the range up to the FX9, including  S-Cinetone and Cine EI.  It will record, internally, 4k 4.2.2 10bit (Long GOP or All Intra) up to 60fps. It also offers 16-bit RAW via HDMI at 4672 x 2628.

Interestingly, like the Venice and FX9 and unlike the other cameras in the range, it has a Dual Base rather than Dual Sensitivity Sensor. The Dual Base sensors offer ‘near-identical’ performance in both ISO ranges. In S-Log 3 these are 800 and 3200 ISO – much slower than the FX3 which offers a high sensitivity of 12,800 but, curiously, identical to the Dual Base sensitivities of the 8K Venice.

It closely resembles the FX3 but unlike that camera, which is basically a re-bodied A7S III, there is no stills equivalent. The FX30 can take stills, but it is obviously a camera designed for motion pictures, even though it looks much like a mirrorless stills camera. This is not a form I particularly like (nor, for that matter, do I really like the ‘hand-held’ form with the viewfinder in line with the lens, except for the very lightest cameras) but of course it is fine for working with a gimbal. There is no viewfinder to press your eye against so are going to need some sort of rig if you want to use it hand-held.

There are a few video-specific things that Sony have done quite well. Firstly, and thankfully, the camera has been designed to be used without a cage.  A video camera that necessitates an exo-skeleton for any serious use is, for me, a massive design fail. The FX30 has five standard  ¼-20 screw points in the body and three on the XLR handle. The magnesium alloy body is sturdy and uncluttered and surprisingly light.

The optional (but essential) handle offers decent XLR inputs and, in addition, a stereo minijack input that effectively gives you 4 channels (great if you want to shoot, say, with two radio mics and a stereo ambient mic) - which few low-cost cameras provide.

Let’s face it, the major Japanese manufacturers are not great at interfaces. Their aim seems to be to give you as many options as possible, and their solution to any interface issue, including having too many sub-menus, is to give you more sub-menus. Sony claims to have re-designed its menus for the video user and it is gratifying to see dedicated buttons for Zebra, Peaking and Focus Magnification on the back of the camera.

Having said that, the design and layout of the controls is still largely based on Sony’s stills cameras and to anyone raised on professional video cameras, they are far from intuitive. For instance, you might think the ISO button is equivalent to the gain switch on a traditional video camera, but in most modes, it does not actually do anything at all. BlackMagic Design can get interfaces right – why can’t others?

As well as integrating well into Sony’s Cinema Line, the other bonuses are the proprietary technologies that come from being made by one of the big three Japanese manufacturers: sophisticated autofocus, decent stabilisation and Sony’s surprisingly effective Clear Image zoom. And of course there is the versatile E-mount with its short flange depth. What it lacks is Sony’s lovely variable ND – or, in fact, any ND - but the received wisdom on cameras in this format that it is a choice between stabilisation or internal NDs (I’m not convinced - they manage it on small camcorders, why not on this?).

But what is it like to use and what are the pictures like? Read more in the second part of this review.