What’s so super about super 35? 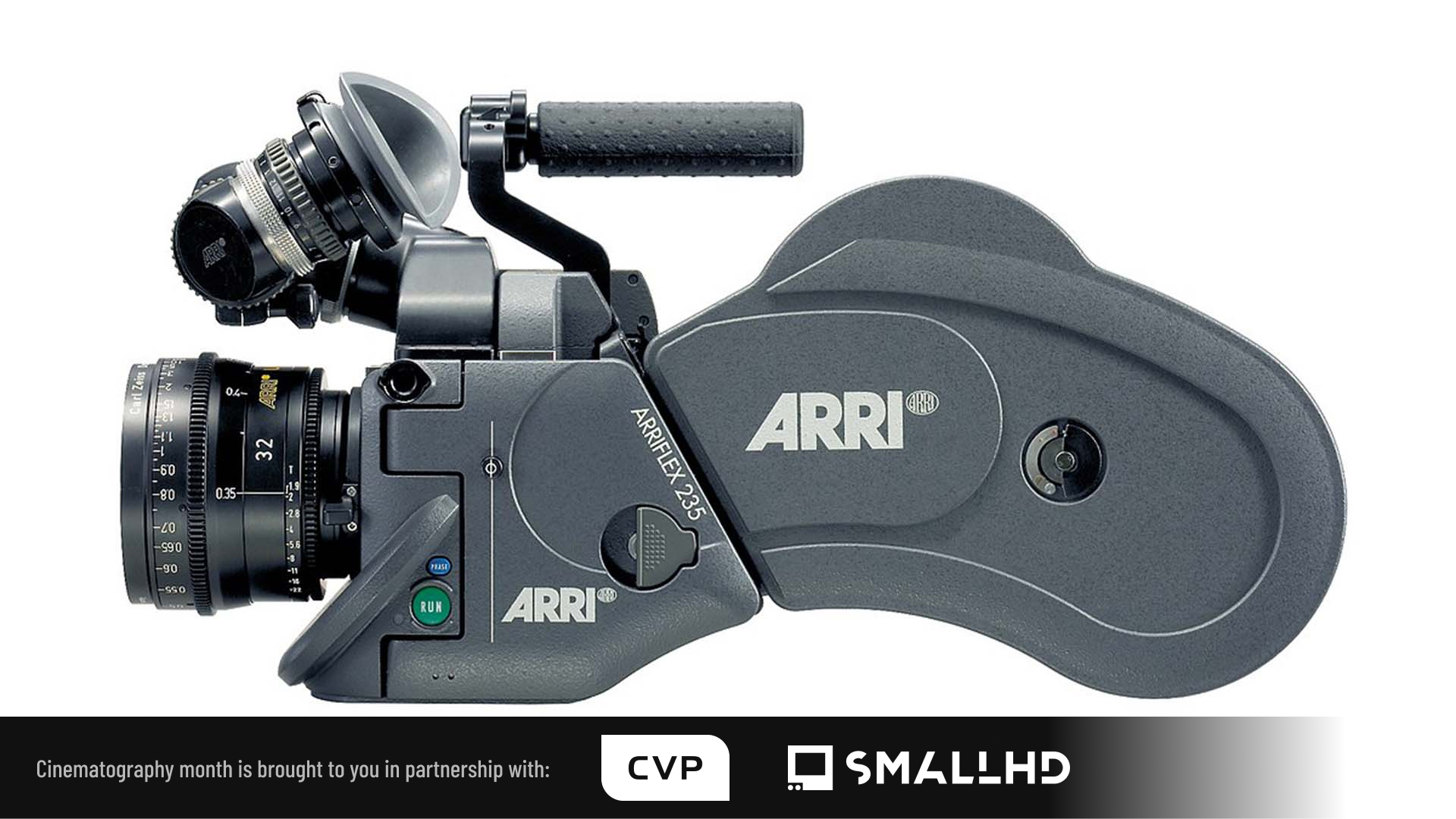 We are used to referring to sensors as Super 35 – or S35. But what is so super about it? And is it really the same as APS-C? Well the answer is not simple and a warning – you need to be a bit of a camera geek to care.

The size of the S35 sensor really goes back to the dawn of motion pictures at the end of the 19th century when a format emerged that is still with us today. 35mm film, with four sprocket holes per frame and a 4:3 (1.33:1) aspect ratio, was the format designed by Thomas Edison and his assistant, William Kennedy Dickson, originally the result of splitting rolls of Kodak’s 70mm stock into two. In 1908, the Motion Pictures Patent Company made that format the official standard, further endorsed by SMPTE in 1917. What happened over the next few decades was the fight between the 1.33:1 format of the filmstock and the desire for wider formats. That explains the ‘35’ part; it would take eight decades for the ‘S’ part to emerge.

That 1.33:1 ratio became more square when sound was introduced in the late 1920s, the soundtrack taking up space on the edge of the frame. Exhibitors would crop the top and bottom in the projector to get a more acceptable rectangular frame. In 1932 the Academy format standardised the crop at 1.375:1. The desire for a wider frame continued by using anamorphic lenses (which I’ll leave out of this discussion) or cropping the 35mm frame further to a ‘widescreen’ format. This eventually settled down to 1.85:1 in the USA and most of the world, although 1.66:1 and occasionally 1.75:1 remained common in Europe. This crop obviously wasted a fair amount of valuable filmstock, but the wider frame became the preferred form for moving images to this day – only disrupted by the now prevalent vertical format of the smartphone and the reluctance from consumers to turn their phones 90º. 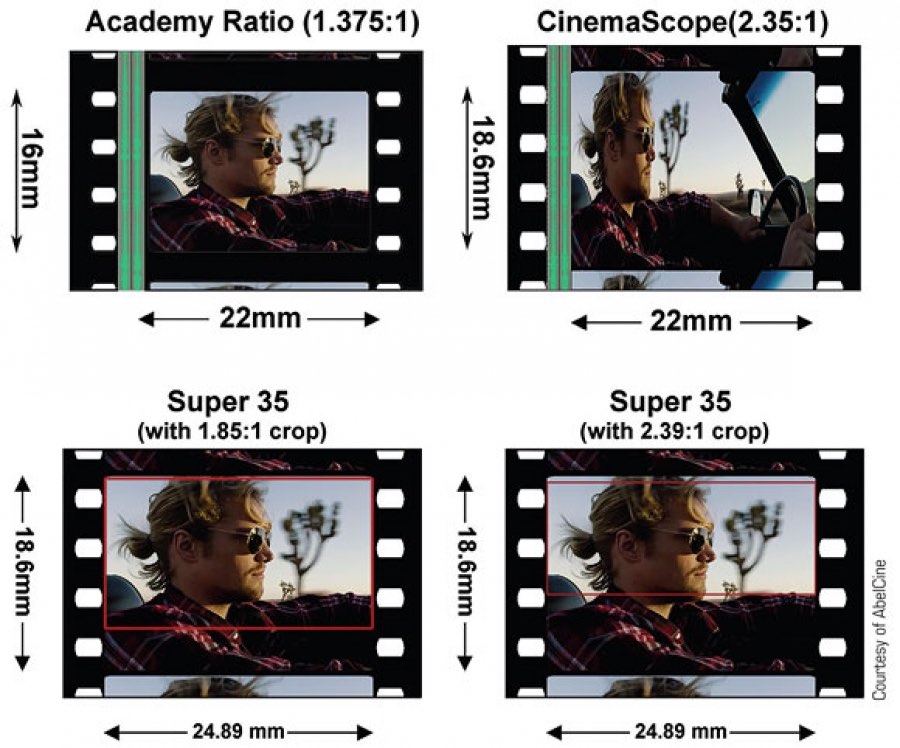 Once you delve into these issues, it becomes hard to come up with precise dimensions. The only constant is the width of 35mm film; once we start looking at the size of the frame we come up with the difference between camera and projector apertures and how that frame ends up being displayed in the real world.

I’ve written before about Super 16, first seen in 1969, which extended the camera image to the area previously occupied by one row of perforations and the soundtrack to produce a wider frame, not that much smaller than the cropped 35mm widescreen frame. The actual aspect ratio of Super 16 is 1.69:1  (approximately 15:9)  which conforms neither to cinema nor TV standards, but then cinema aspect ratios have never matched television aspect ratios. There’s a much longer discussion to be had about how filmmakers have attempted various compromise formats to produce the whole range of conflicting ratios required for cinema and TV from that 35mm frame. It’s not a happy story.

Back to the silent frame

The Super 35 format, (more accurately, a group of formats), which emerged in the 1980s was, like Super 16, a camera-only format, intended to be optically printed to regular 35mm for projection or telecined for TV. Like Super 16, it made use of the area of the negative reserved for the soundtrack but, unlike Super 16, kept both rows of perforations. In other words, it was a return to the frame size of the silent era. Yes, the format we call S35 today was actually created in 1889.

For cinema use, the increased size of the image did not, in practice, improve picture quality, as what was gained was lost in the optical process needed to realign the image for projection prints. With the introduction of digital intermediates, followed by the pervasion of digital projection, this ceased to be an issue.

What made Super 35 more appealing was when it was applied to cameras modified to give a 3-perforation rather than 4-perf pulldown (this was an 80s innovation by Swedish cinematographer Rune Ericson, who also devised Super 16). Although this departs from Edison’s original format, it clearly saves on filmstock and, conveniently, has an aspect ratio of around 1.78:1 – in other words, 16:9. 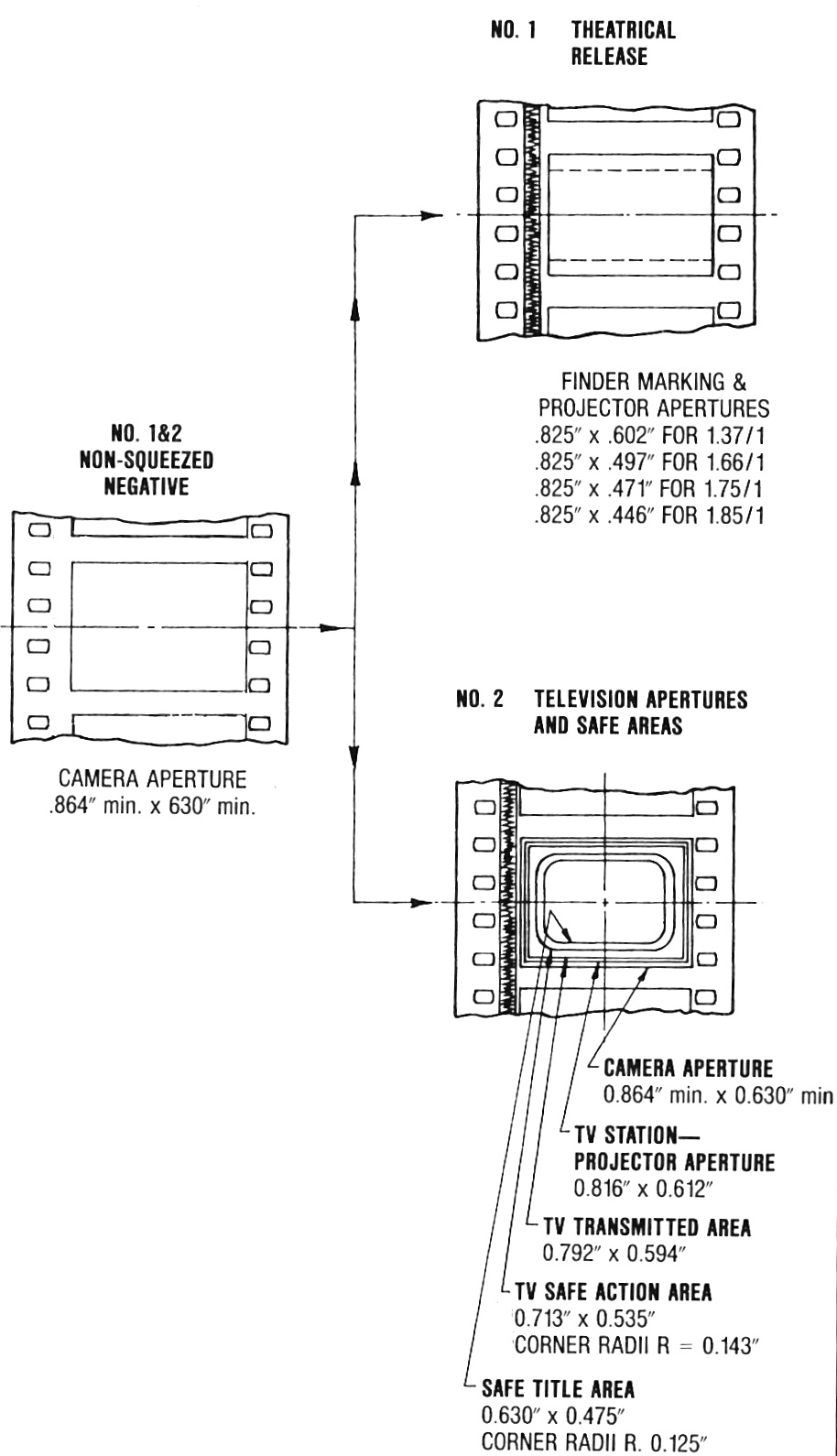 And what about aps-c?

35mm filmstock found another use other than its original function for movies; it became a standard for stills cameras, as introduced by Leica in the 1930s. The big difference, of course, is that 35mm film runs sideways in stills camera, resulting in a frame that is around 24mm high rather than wide.  It is only when digital stills cameras began to be used for movies that the notion of ‘Full Frame’ was applied – the only motion picture format that ran 35mm film sideways was VistaVision, a short-lived in the cinema but one that continued as a format for special effects. VistaVision and the rarely-used 65mm aside, pre-digital, the S35 format was as ‘full’ as movies could get.

So what about APS-C, a term which seems to be used interchangeably with S35?

Like Super35 and Edison’s original 35mm format, the frame is around 25mm wide. Although we think of it today as a digital stills format, it originated from the short-lived APS format for analogue stills. No longer tied to the physical width of the filmstock, the actual size of the APS-C sensor can vary 8mm in width from one camera manufacturer to another. It’s not a particularly helpful term in the movie world.

Today, we are in an enviable position. With large, high resolution sensors, we have a multiple of format options within the same camera. What is even more cheering from the cinematographers’ point of view is that with the digital frame, particularly with streaming services using the increasingly popular 2:1 format, we can, perhaps for the first time in film history, know precisely where the top and bottom of our frame actually is.