Can you really get a cinema camera for a couple of grand? No, not really…In Part 2 of Roland Denning’s review of the new Sony FX30 he finds it an excellent companion camera but a limited main choice.

We have said here many times that all professional video cameras are capable of creating great pictures. If so, what is that make us chose a particular camera? My simple answer is: you choose the one that fits your way of working (and you can read part one of this review here: Sony FX30 reviewed: A gateway drug to Sony’s Cinema Line?).

I see two main reasons for buying the Sony FX30. Firstly, as a companion to a larger camera in the Cinema Line – FX9, FX6, or the earlier FS7 or FS5. Since the FS7, Sony have dominated mid-range TV production in the UK, and I believe they will continue to do so with the FX9. The FX30 is great as, say, a locked-off second camera if you are shooting an interview. It will be compatible with all the same lenses as the main camera and, crucially, it can deliver using the same Sony codecs.

Secondly, as a low budget indie camera, competing with cameras like the BlackMagic Pocket or the Panasonic GH5. For this purpose, the FX30 is one of the better ones in its class. The optional handle has not only two XLR inputs but an additional stereo channel accessed through a minijack. It doesn’t need a cage, its batteries last a couple of hours of shooting and it has a decent (but small) flip-out screen. It also features Sony’s increasingly usable autofocus system and 5-axis IBIS. Being one of the latest additions to Sony’s Cinema Line, it also has the latest software, including lens breathing compensation. The latter, in principle, is great but it only works with certain Sony GM lenses and Sony’s better zoom lenses suffer little breathing anyway.

Sony’s autofocus gets better with each generation of software, but you still may choose not to use it. It’s worthy of a whole long discussion in itself but, if you want to know more, I would point you towards the two informative videos Philip Bloom has made on the subject.

XAVC-S and XAVC-HS are great camera codecs, and for anyone yearning for ProRes (which I regard more as a post-production codec), I suggest you do some comparison tests. The range of formats should satisfy most pros, data rates going up to 600Mbps for 4k 10-bit All-Intra, but with options in the 100Mbs to 200Mbs range that should satisfy most users.

As well as the increasingly standard Cine EI /S-log 3, Sony’s S-Cinetone is an attempt to provide an out-of-the-camera ‘film look’ and to escape the traditional Sony video look, now very much out of fashion, and it offers a nice gentle roll-off on highlights.  A key element of S-Cinetone is that when you underexpose, the picture becomes more contrasty and when you over expose, it becomes flatter. This is a great creative tool and, since this is designed to deliver this look without a LUT, you can judge the effect on the monitor as you shoot.

Not for sunny days

As I said in the first part of this review, Sony have attempted to make their interface more video-centric and unclutter the LCD screen, but there is no getting away from the fact it is based on stills technology. The menus are still unnecessarily  complex and counter-intuitive. And there is no waveform monitor nor internal ND. 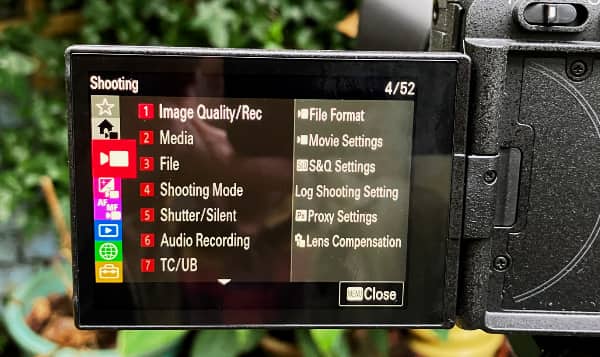 What is more crucial is that there is no viewfinder and Sony don’t make one as an extra. Without an EVF you can’t steady the camera against your head and, more importantly, you’d be hard pressed to view the image outside on a bright sunny day, even in foggy London. I’ll say that again – you can hardly use this camera outside on a bright day.

The irony of many compact, ‘pocket’ video cameras is that you can only really use them with a tripod, a gimbal or some sort of shoulder rig. Sony’s IBIS is pretty good, but with anything other than a small, wide lens you are not going to be able to do much handheld shooting.

In conclusion: a great companion

So, to sum up: the FX30 is great value and can deliver great pictures. It’s an excellent companion camera to the rest of the Cinema Line, it’s fine for shooting interviews but, as a main camera, it’s severely limited.  I’m a big fan of the S35 format but the stills camera form factor just doesn’t cut it for me. But then that’s all based on the way I use my cameras and the sort of work I do – your practice may be totally different. Can you really get a fully-fledged Cinema Camera for a couple of grand? Not really, but then there ain’t no Santa Claus either.