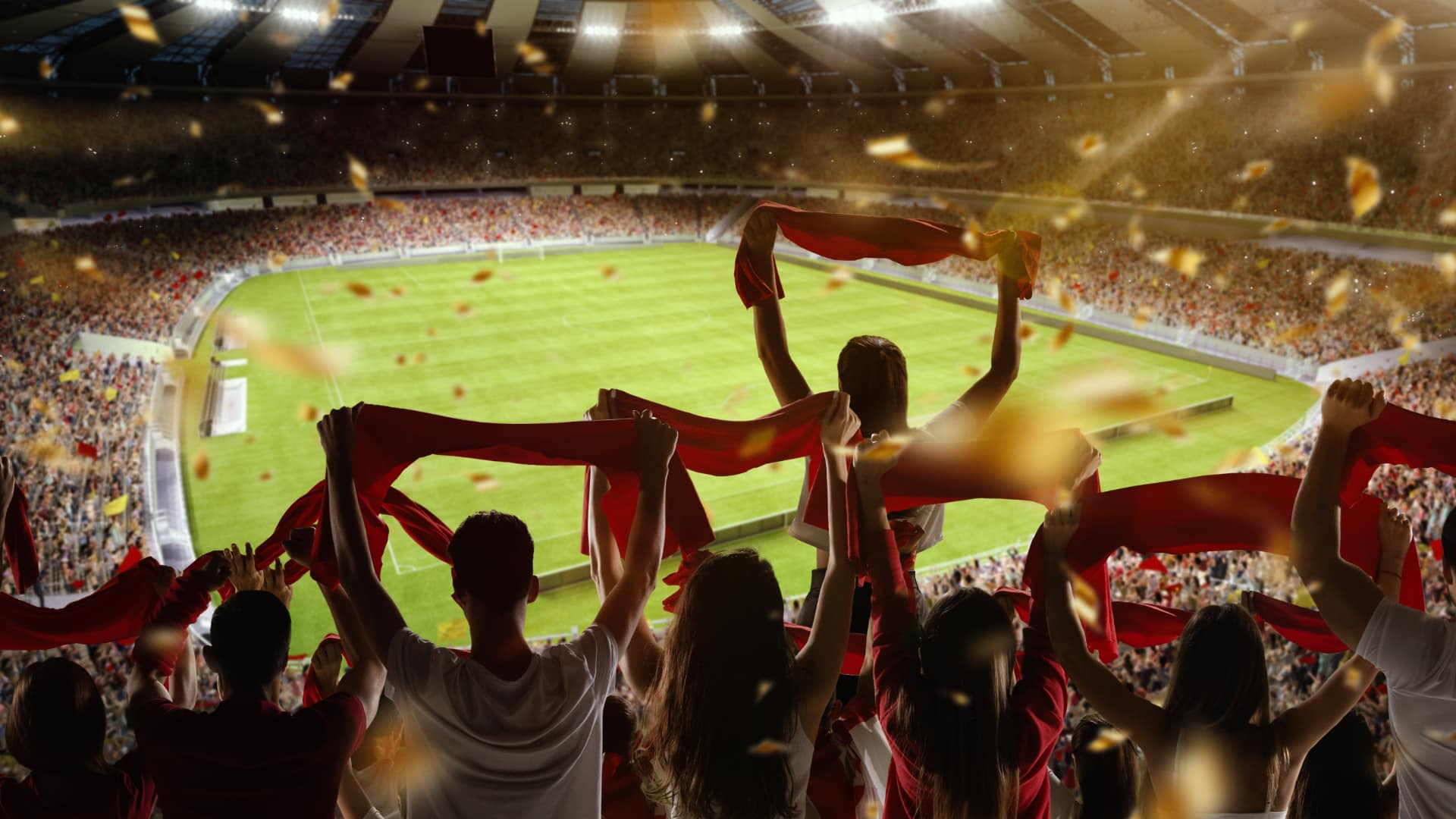 3 minute read
Getting in the fan zone. Pic: Shutterstock

Alongside the Summer Olympics, the FIFA World Cup is the biggest global sporting occasion there is and an opportunity for broadcasters to raise the bar for sports coverage again.

The 2026 World Cup is going to be a celebration of football, though as it’s taking place in Canada, Mexico, and the USA, inevitably more and more of us will finally be talking about soccer instead. In the meantime though we have the current Qatar 2022 tournament, one of the most controversial sporting events of recent times.

Lots of bad stuff has happened off the pitch in Qatar, whether in terms of LGBTQ rights or the treatment of migrant workers — and will continue to do so. So I’m going to donate my fee for writing this piece to Stonewall and meanwhile try to concentrate on the broadcasting of the tournament.

And if you’ll excuse the pun, it really has shifted the goalposts.

The World Cup has been put together by Host Broadcast Services for a number of tournaments now, and each tournament the standard camera plan has grown. Each of the 64 games now has a minimum of 42 cameras. Only about a third of these are standard broadcast cameras, which are augmented by 10 super slo-mo and ultra slo-mo units. On top of these you have PTZ units, pole mounted units, a drone-cam, spider-cam, a helicopter-mounted camera, Steadicam rigs, and more. Basically, if it happens in the stadium, somebody somewhere is going to see it.

The big change this year is a unified workflow bridging HD, UHD, HDR and SDR. Previous tournaments always had some element of parallelism in the workflows, but now everything is captured in UHD HDR (hybrid log gamma since you ask) and converted where appropriate on the fly before transmission. Cameras shooting 150fps and higher tend to be restricted to 1080p still, so those images are upconverted.

Audio is comprised of the typical choices of a basic-stereo mix and a 5.1 surround-sound mix, with a 5.1.4 immersive mix on top of that.

It looks great and it sounds great in other words. And if you’re not seeing any of that, that’s simply because the broadcaster of your choice hasn’t taken those formats. Not everything is available everywhere, unfortunately.

If anything though, the camera package is evolutionary not revolutionary, Previous tournaments have flirted with Stereo 3D and VR, but even 8K seems notable by its absence here. In fact it’s behind the scenes where the biggest area of change lies, and that’s in the sheer amount of data that is being captured about everything that happens on pitch and the way that it is being graphically presented to the viewer.

“We have a connected ball that sends data to a central server here. That data is used, for instance, to calculate the speed of the ball. We now have that, which only seems natural,” commented Florin Mitu, head of broadcast production for the 2022 FIFA World Cup to SVG.

Coupled with automated analysis of everything that happens on the pitch, on and off the ball, FIFA’s team of football analysts, data scientists, and data engineers have created a system that feeds into broadcast graphics to provide analysis of the match by TV pundits and also provides a mammoth 52 page report of every match that has taken place at the tournament as well.

All in all the FIFA High Performance Group under the directorship of ex Arsenal manager Arsène Wenger has introduced 11 new metrics for this tournament from pressure on the ball to expected goals and team shape. You can read more about them here. Football Manager obsessives are going to have a field day.

While such initiatives are thought key to increasing audience engagement for broadcast audiences by sports around the world, there’s also been a new concentration on the fan experience in the stadia of the World Cup itself. This is a big and coming thing, especially as companies work on implementing 5G nodes inside sporting venues, and in Qatar the  FIFA+ Stadium Experience app features everything from a live augmented-reality overlay of stats, heatmaps, insights, different camera angles, VAR replays as on TV, and more. Plus there’s a load of personalised features that carry across a whole range of FIFA apps to keep fans immersed in the FIFA experience way beyond the stadia themselves.

It’s neat technology and something that will no doubt be much further enhanced for the 80 matches of the expanded 2026 World Cup, which will feature 48 teams for the first time playing in 16 cities from Vancouver in the north to Mexico City in the south (Mexico, incidentally, will become the first country to host or co-host the men's World Cup three times).

Planning for that event is already well underway, and it will be interesting to see what new tech will be on HBS’ radar as we get closer to the event. But back to this present one and one other thing about cameras is worth talking about. It’s not just the players getting unprecedented coverage. Over 15,000 cameras deploying facial recognition technology are being utilised during the tournament, ostensibly for security threats such as terrorism and hooliganism, but given Qatar’s track record in human rights no one is really betting on wider uses not being suddenly discovered down the line.