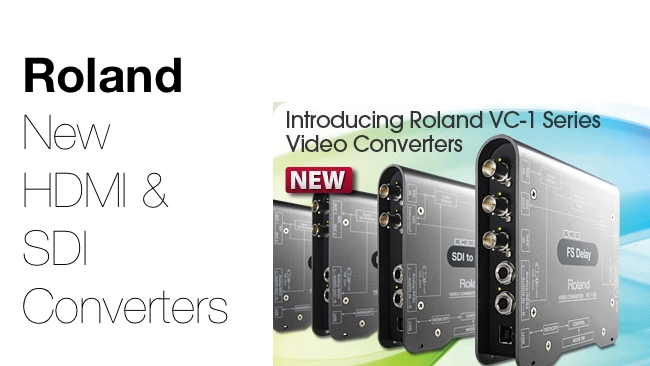 Roland Systems Group is taking a new range of portable video convertors out to Vegas, very reasonably pointing out that with more uncompressed signals such as SDI and HDMI being used in live production, the need for video conversion is growing.

The new single-function mini convertors build on the tech developed for the company's VC series and maintain video characteristics through conversion to help make sure there are no conversion or signal errors. Other headline features include an on-board re-clocker to compensate for attenuation of SDI signals carried over long distances, support for both level A and B 3G-SDI, HDCP compliance, selectable audio embedding and de-embedding, and digital AES/EBU input and output signals.

The VC-1-HS converts HDMI to SDI; the VC-1-SH converts SDI to HDMI; and the VC-1-DL provides bidirectional conversion of SDI/HDMI as well as frame sync and delay adjustment of up to nine fields (4.5 frames) for audio and video independently (handy when keeping various types of cameras in sync as well as ensuring a projector stays in sync with an LED wall, for instance).