Why film the real world when you can make up completely new ones? 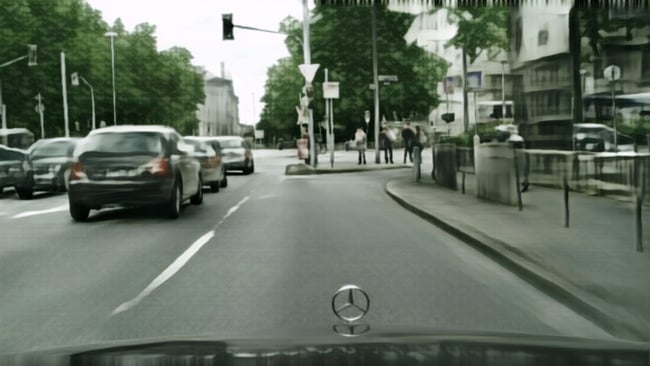 Reality, or the imagination of a computer?

Computer generated environments are a part and parcel of Hollywood filmmaking, and they make modern blockbuster movies as we know them possible. But the 3D models are still created by humans. However new technology is currently being developed that can create realistic looking CGI environments based upon machine learning.

Quite obviously, the conventional role of a camera is to record the real world. But sometimes an imaginary world is better. Maybe you want to shoot a film in a city but don’t have permission to close off streets and litter the neighbourhood with film-making paraphernalia. Or maybe you’d just like things to look a bit “different” from a normal city.

These days, it’s perfectly possible to have a team of 3D artists and modellers create a convincing cityscape. In fact, it’s often cheaper to do this than, for example, closing down a section of Washington DC for a car chase.

It’s also much easier to create a digital landscape for historical dramas, where contemporary buildings and street life can be replaced with scenery that’s authentic to the era. Once you have the models, it’s just a matter of shooting live action against a green screen and compositing the elements together. Boardwalk Empire, six years ago, was a triumph of this technique.

In a way, the methods used in Boardwalk Empire replace one kind of hard work (building scenery) with another (building computer-generated scenery). But with the help of CGI, the result is much better, and on a day-to-day basis achieves a level of realism and artistic flexibility that real-world techniques could never approach on a sensible budget. It’s always possible to build a “real” street scene, like the “New York” set on Paramount’s Studio Lot in Hollywood, but those are real buildings built on actual real-estate, and you know how much real buildings cost.

I’ve often thought about the idea, years in the future, where you feed a film script into a computer, press “go” and end up with a complete film — totally synthesised. I don’t think this is impossible. Whether it’s desirable or not is another matter. If it sounds far-fetched, that’s perfectly true. But it’s just a little bit less far-fetched than it was just a few days ago.

And that’s because a team of researchers has developed an Artificial Intelligence technique that uses Machine Learning to generate convincing cityscapes and street scenes that have never existed anywhere.

The system is “taught” what a real city looks like by being shown thousands of real-world examples. So it knows what a tree is, what a car is, and what street furniture looks like. To create a cityscape that’s never existed, a designer would show the system roughly where it wanted buildings, cars, telegraph poles and people to be situated, and the computer will then generate a realistic-looking scene based on those instructions.

It’s not perfect yet, but that it can even attempt such a complex task is almost a miracle from our perspective. The images are blurry and lacking in detail. But you can see the potential. Perhaps the technique has to improve a thousand-fold for it to be acceptable in a cinema. But with today’s rate of progress, that will only take a few years.

Thanks to www.engadget.com for drawing our attention to this.