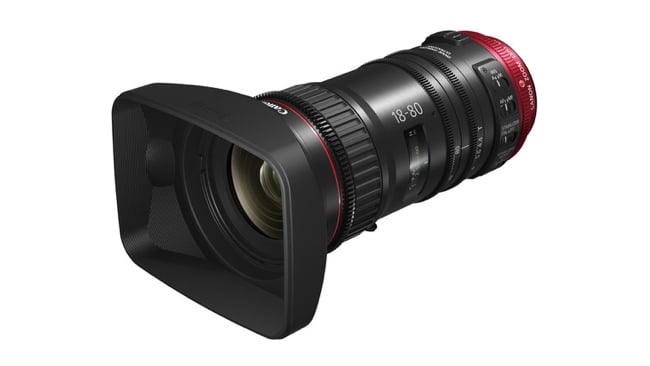 RedShark Review: While it’s tempting to think that glass is glass, the price/performance of the Canon CN-E 18-80mm T4.4 - 4K EF Servo zoom lens shows how evolution in the lens field is accelerating.

The popularity of cine style cameras, or rather those with large sensors, rather caught out the lens manufacturers, thanks to the rise of the DSLR. As such cameras gained popularity, and manufacturers started making dedicated, affordable cinema style cameras, it was clear that big, super expensive PL lenses were not going to suffice for the average punter who didn’t own an Arriflex Arrihead geared head to mount their camera on. Okay, I admit it, I am suffering from a bout of hyperbole, but the fact remained that owning a set of PL lenses not so very long ago was not an undertaking for those on modest budgets. The only realistic option was to use stills lenses, with all their inherent limitations for video and cinematography.

Of course, things have changed, as they always do, and there are now some really quite good lightweight PL lenses available for comparatively modest prices. The Fujinon 20-120mm T3.5 for example, coming in at around £16000, is fairly similar in price to many higher end ENG/EFP lenses, and at 2.9kg is only around 1kg more than many ENG lenses, too. When the first large chip EFP style zooms came out, they were closer to $50,000+ only three or four years ago. We’ve come a long way in a short amount of time.

By far the most popular mount for a wide variety of camera is, of course, Canons’ EF system. Despite its current popularity, it will never win over hardened cinematographers, for many well reasoned practical and technical points. But for the rest of us, EF will do just fine, thanks.

It is therefore heartening that the two main video lens makers, Fujnon and Canon, have in recent years started catering for those who would like affordable servo zoom lenses for large sensor cameras, that look and function very much like their trusty 2/3” ENG/EFP counterparts. Such lenses are highly versatile, being useful in a great variety of circumstances without the need to change glass all the time, and are fast and easy to use. Their one-time absence from the market where big chip cameras were concerned, at one time seemed like an eternity.

The subject of this particular review is the Canon CN-E 18-80mm T4.4 - 4K EF servo lens. Those who use, or used to use ENG/EFP lenses will immediately feel at home on first glancing this rather chunky bit of glass. After what seems like an age of using a ton of repurposed stills glass, for me it was a bit like coming home to a comfy armchair, and gave me a warm fuzzy feeling inside. It is nice to get my hands back on a lens that I know from just looking at it, will be highly practical.

Weight-wise the 18-80 comes in at 1.2kg including the servo unit. It feels a little heavier than this to me, and my own scales suggested around 1.6kg. Much of a muchness really, but regardless, for glass like this to come down to such a weight is quite an achievement. Filter thread size is 77mm, so it will suit anybody who has invested in screw in filters of this versatile size.

At 18-80mm capability, the focal length range of such a lens is never going to match traditional ENG/EFP glass. Not without hugely increasing costs and weight. However, as it stands, 18-80mm is an extremely useful range to have. Contrast this with the Fujinon MK18-55 that Phil Rhodes reviewed earlier this year (https://www.redsharknews.com/production/item/4424-fujinon-releases-e-mount-18-55mm-lens) and you have a rather handy 25mm extra on the long end.

The trade off? Well, making glass to suit all needs is a constant battle for making the best compromises. But compromise they must. With the Fujinon you have less focal length range, but you do get a light transmission rating of T2.9. With the Canon 18-80 the compromise you are making is a rating of T4.4, constant throughout the zoom range.

Which of the two lenses you prefer will come down to what you are using it for. My own preference for general day to day working is to have more focal length range. I simply do not like the faff of changing lenses. It slows me down and means I have to carry around more kit. Whilst T4.4 is not the fastest glass on the block, it isn’t the stumbling block that it once was, due to the sheer light sensitivity of modern cameras. Not unless you are after uber short depth of field, in which case you would be better off using cine primes instead, regardless.

As an EFP-inspired lens, all the familiar features are there that you would expect, such as switches to turn auto focus and iris on and off, as well as a rotating switch to swap between servo zoom and manual, and a dial to adjust the zoom speed. The CN-E 18-80 has one other useful extra, the inclusion of built in optical image stabilisation. There are three modes to this. Of them, mode B seemed the best for all round use, whilst mode C is designed to be used off a tripod, and would seem to do a nice job of minimising those little vibrations. Although if I am honest I didn’t notice huge differences between modes A and B.

In manual modes, the iris and zoom rings feel solid enough. They don’t fully have that nice “turning in oil” feel that more pricey lenses have, but there is zero play in them. Manual zoom response is instant, due to being a mechanical connection. If you adjust the iris very quickly, there is a very slight lag, leading me to believe that this is servo actuated even in manual mode. You do have to be making extremely fast adjustments to see this anomaly, however.

Focus-wise, again, this is a smooth control. There is a window showing you the focus marks, however the focus ring itself does not have any hard stops. Whilst this is marked as a cine lens, it is much more suitable in that regard for self operation, documentary work and the like. There is gearing there for focus pulling rigs, but it won’t be an 1st AC’s preferred lens to work with in that regard. I highly doubt that this was Canon’s primary intention anyway due to it’s servo systems focus. This is a lens that makes single operating a large chip camera a breeze, but it can be rigged up if required.

Back focus can be adjusted by revealing an adjustment screw covered by a flap, so unlike a stills lens, the 18-80 can be made truly parfocal, keeping focus throughout the zoom range.

As a £429 (inc taxes) extra the lens can have a zoom grip handle attached to it, making it even more like a standard ENG/EFP system for shoulder mounted work. The standard controls are available, such as a zoom rocker, record start/stop and one push auto focus. The downside of this is that the handle needs to be plugged into the main lens body using a port that is underneath the lens body. This is a rather inconvenient place for it to be, since it means that you cannot safely put the camera down onto a table, or the ground, without unplugging it. To forget to do so means placing the full weight of the camera and lens onto the plug and wire, risking damage to the connection. This could be mitigated with a rails system that adds height to the bottom of the camera, but not everyone will be using such things.

I measured zoom speed at the highest speed setting to be around the 2 second mark. Respectable, though if you want crash zooms, manual will be the way to go. The zoom rocker on the optional hand grip had a good amount of sensitivity, and allowed for some very subtle zoom speeds to be achieved. I did find a very, very slight jump to the lowest speed when attempting a very gradual start to a subtle very slow zoom, but the sensitivity allowed for a very smooth finish. This will be more a case of tactile practice to learn where the rocker positions are. Auto focus is smooth, fast, and precise. Although much of the performance of the AF will depend on your camera.

Readers of my reviews know that I shy away from tight technical tests because unless you can truly test under highly controlled lab conditions you will be fighting a losing battle. Even then there can be discrepancy between issues caused by the camera itself, and the lens. Therefore true comparative lens performance evaluation tests can only truly be carried about by experts with specialised equipment. That said, we can get an overall idea of how it performs, and whether there are any glaring issues with it.

Lens design is always about balance and compromise, more so when it comes to making glass that is relatively affordable. But what I have seen of the CN-E 18-80 is very good indeed for a lens of this cost and weight. Overall sharpness seems to be very good, with only slight softening at the edges at certain focal lengths and T-stops. One thing to note related to this, however, is that while this lens can be free mounted on any EF mount, it is a good idea to support it with rails to prevent movement on the mount. Cameras such as the ME200S-SH, which I will be reviewing later, are less prone to this due to their locking mount, which makes for a more solid attachment.

The 18-80 is compatible with cameras that offer lens correction/compensation such as the Canon EOS C300II, which came with this review sample. Although chromatic aberration would appear to be well controlled from the start: when combine with such a camera, issues such as this are all but eliminated.

Focus breathing, too, for a lens of this type, would appear to be good too. It is there, certainly, but it is a damn sight better than many ENG lenses I have used in the past! In real world use it is hardly noticeable. Lens flare is also very nicely controlled indeed.

The CN-E 18-80mm T4.4 EF cine lens from Canon comes in at around $5225. I have seen some commentators therefore calling it an expensive lens. On this front I have to differ in my opinion. Not so long ago, the least expensive cine zoom lens for large chip cameras in EF form was closer to the $40k mark. For such a well performing and versatile lens to be available now for close to four and a half grand is rather remarkable. To put this into perspective, when I bought my last ENG style glass in 2005, I paid $9000 for it. That was for a standard definition lens. Wider angle versions were over $13,000. Currently if you wanted to buy a Canon HJ22ex7.6B IRSE lens for a 2/3” camera now, for example, you would be paying around $21,000. Food for thought.

This isn’t so much expensive as it is an extremely good value for money lens. The focal length range is extremely useful, and although it isn’t the fastest around at T4.4, it will serve you in a wide variety of circumstances as a go to lens for years to come. It is a sound investment.