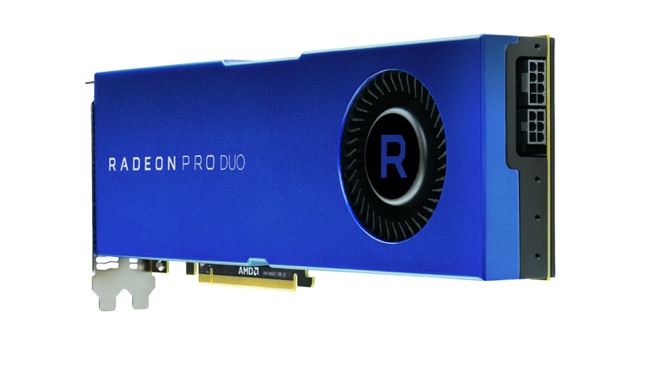 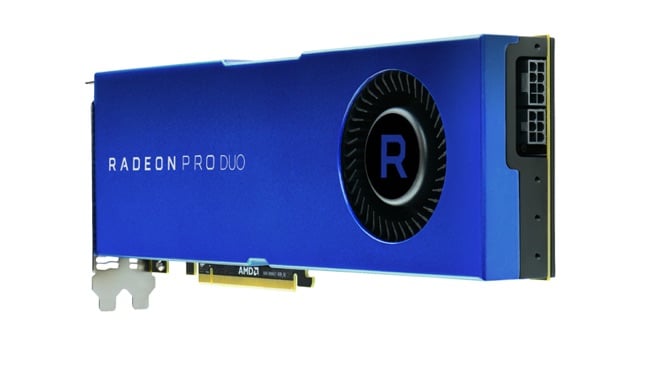 AMD has released a new version of its Radeon Pro Duo workstation graphics card that is completely different to the version launched in April 2016.

They changed the silicon, they changed the memory and they changed the cooling. Heck, they even changed the colour from traditional ATi black-and-red to a new blue called YinMn. That’s right, the pigment has its own Wikipedia page. Pretty much the only carry-over is the name, apart from the continued use of dual GPUs on a single graphics card.

The details that AMD announced about the new Radeon Pro Duo appeared so baffling that it took a certain amount of back and forth by email to pin things down because it appears the new graphics card is slightly slower than the graphics card it replaces.

That’s right, slower. But it's not always about out and out speed; it's about being fit for purpose, and driving workstations is what this card does.

It is worth mentioning the $999 price tag too, which may seem expensive. But frankly, if you are in the market for a $5,000 Dell 8K display, we are confident you will take the price of the Radeon Pro Duo in your stride.

In April 2016, AMD launched the Radeon Pro Duo which used the familiar red and black colour scheme with the unique selling point that it combined two Fiji graphics chips on a single PCB. In essence, the Radeon Duo was a dual chip Radeon R9 Fury X with 4GB of HBM (High Bandwidth Memory) for each GPU. Fiji was the best graphics silicon in the AMD portfolio and obviously, two is better than one, but there was slightly more logic to the new graphics card than a simple doubling up.

The Radeon Pro was positioned as a graphics card that catered to all markets. You could game with it, use it for professional work or use it for developing new applications. The sceptics among the RedShark audience will raise an eyebrow as they know full well the differences between a workstation graphics card and a gaming card can be very slight. Often it comes down to the magic transistor that tells the drivers to identify the card as a Fire GL rather than a Radeon, or a Quadro and not a GTX. You can also expect the workstation card to have more memory, which comes in handy.

And now for something completely different

The original Radeon Pro Duo had exactly the same amount of memory as the R9 Fury X, so there was no difference on that score. In terms of drivers, the Radeon Pro Duo was flagged as both a gaming graphics card and a sort-of workstation card. Lesser apps such as video editing would recognise a professional card while ‘serious’ software would lock it out.

And today we have a new, revised Radeon Pro Duo that is completely different.

The GPUs use Polaris architecture and support GCN 4th Gen, rather than the GCN 3rd Gen we saw in Fiji. The fabrication process shrinks from 28nm to 14nm and the power draw drops from 350W to 250W. This massive reduction in power draw has clearly made them confident they can ditch the liquid cooler and switch to a relatively cheap and simple air cooler.

AMD has changed the memory from HBM to GDDR5 with 16GB per GPU, which is 32GB in total.

Depending on your point of view the new GPUs are either RX580 or WX 7100 and it is perfectly possible the graphics drivers will treat the GPUs as either RX580 or WX 7100, depending on the application. You’ll pay north of £500 for a WX 7100, so this dual GPU card makes a fair amount of sense. More pertinently, a Quadro M4000 costs about £900 and delivers similar performance to WX 7100 so you could bag double the performance for pretty much the same price.

On the face of it the new Radeon Pro Duo looks like an odd fish but when you drill down it makes a good deal of sense. That will be little consolation if you require CUDA support, but even if you aren’t interested in 8K at 60Hz support today it might interest you to learn the Radeon Pro Duo supports four 4K monitors at 60Hz. And you have to admit, that’s pretty darn impressive for a graphics card that sells for less than a grand.