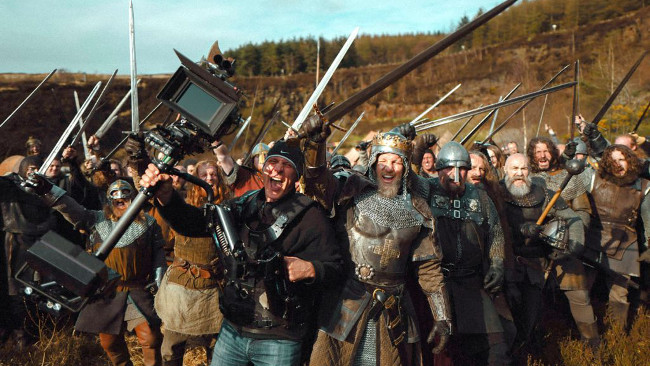 RedShark Replay: Over forty years ago, Garret Brown came up with an unwieldy looking invention that promised to provide silky smooth shots without the use of dollies. Still at the top of its game and blurring the lines between art and science four decades later, the Steadicam — and the Steadicam operator — was born.

When we watch any film or television programme now, the fact that the camera can move around the set is nothing new to us. We just expect to see the shot weaving in amongst people, along streets, up-and-down stairs and all other manner of movements.

Nowadays, we quite often see multi-axis brushless motor gimbals creating such shots. But the staple method of achieving this on feature films is still the Steadicam. 2016 marks the 40th anniversary year since the public themselves first saw what it could do in the 1976 films, Rocky and Bound For Glory, and it is no hyperbole to say it is possibly the most incredible and versatile cinematography weapon ever created.

The Steadicam is one of those devices that, on the face of it, it is incredible that nobody had invented or thought of it previously. It is entirely mechanical, relying both on physics, and the operators' skill to create its magic. Name some of the most iconic shots in cinema and the chances are that a good portion of them will have been created with a Steadicam.

Its invention meant that no longer would a moving shot have to be confined to places where it was possible to build a dolly or a crane. It sent shockwaves through Hollywood at the time of its invention.

The inventor of the Steadicam, Garrett Brown, came up with the system after becoming fed up of using the large, heavy dollies that were required to move cameras around. After creating a demo reel of example 'Impossible shots' that were possible with his new invention, one of which was of his wife running up the now famous Philadelphia Art Museum steps that were so iconised in Rocky, the road was set for the liberation of camera movement.

If you have ever seen the demo shots, you will know that they are really quite wobbly and imprecise. Garrett was clearly still getting to grips with his new invention.

The early Steadicams or 'Brown Stabilisers' as they were originally known (but happily not for long) that Garrett built look incredibly crude by today's standards. But with each iteration, the device became further refined as it evolved into what we see now. However, the principles and base idea behind the design remained the same.

Not everyone was on board for Browns' invention, however. One famous director in particular disliked Steadicam so much that, in some cases, he went to huge lengths, literally, to build long dolly tracks so that he didn't have to employ someone to operate it.

A Steadicam consists of a main sled pole, which holds the camera at the top, a counter weight at the bottom and a mechanical gimbal just above the balance point. The gimbal then attaches to a spring loaded arm, which is, in turn, attached to the operator's body by way of a vest. It is the job of the arm to isolate the camera sled from the movement of the operator's body and to effectively 'float' it, with the vest that the arm attaches to being designed and fitted such that the weight of the rig is distributed through the operator's legs. So far, so simple.

In order to do this effectively, both the gimbal and the arm must be manufactured with extreme precision. Any unwanted friction in joints and bearings (or a gimbal that hasn't been made to extremely fine tolerances) can ruin the result. In addition to this, while the job of the arm is to isolate the camera from the operator's body movement, the operator must still retain physical control over the direction of the camera in such a sensitive way as to not ruin the smoothness of what the arm and sled are achieving. All the while he or she must also hold a composed, aligned, skeletal structure to support the not inconsiderable weight of the rig. It is an amazing juggling act.

The success of the Steadicam is all the more remarkable for the fact that, as you might have gathered, it is incredibly difficult to operate. That Garrett Brown had the tenacity to understand that his device could ultimately be controlled with the ultra fine finesse we see today is really quite incredible. As anybody who has tried one knows, the ability to exert even the most basic control over a Steadicam for chargeable work requires daily practice and could take up to a year to learn. And that is for the most basic skill level. After that, it is a career of dedicated operation and practice to refine those skills.

Operators with the highest skill levels, such as the now retired (currently Director of Photography) operator Charles Papert, are regarded with almost Jedi-like reverence. Papert, for example, was renowned in the industry for being able to create ultra-slow moving shots that were so steady that you would assume that the camera was on a dolly. Being able to achieve slow moving shots with a Steadicam is one of the most difficult skills to master, because at such speeds it is difficult to maintain a smooth, continuous motion without it appearing 'walky'. To be able to do it without any extraneous movements whatsoever borders on the supernatural.

Even more incredible is that, despite the skilled operation of the Steadicam being as tricky as ever, combined with the weight of gear that operators are often expected to carry, audiences and filmmakers alike now take it for granted. With the daily costs involved, producers will try to get as much use out of an Steadicam operator as they can possibly muster. They are both the grunt who looks like Robocop and the extremely skilled guy who the film depends on at the same time.

The Steadicam is one of those devices that, despite the skill level required to use it, the shots that it achieves should not be noticed. The ultimate aim of a Steadicam operator is to ensure that the result doesn't look like a Steadicam shot. 'Floaty' shots are frowned upon unless specifically asked for and even slightly off horizons can be held in critical disdain. This is a craft where ultimate precision is rewarded.

Once the preserve of the upper echelon of filmmaking, Steadicam and devices based upon Garrett Brown's original patent, are now available to filmmakers on any budget, although that presence is now threatened by the new generation of motorised gimbals. It is, after all, understandable that a younger generation of filmmakers would question the time needed to become proficient at Steadicam, when they can buy a motorised gimbal and be up and running in minutes.

You might think, then, that Steadicam might be facing extinction. Far from it. Motorised gimbals are notoriously heavy to hold on outstretched arms. Rather than fight the tide, Steadicam now has a system called the Steadimate, which allows gimbals such as the FreeFly Movi to be mounted onto a Steadicam arm to take the weight. The additional advantage to this is that it further isolates the camera from the body, making even smoother shots possible with the gimbal.

Ths is what we're talking about

To end this article, I could leave you with a video of the first ever Steadicam feature film shots in Bound For Glory or Rocky. I could even show you the incredible one shot action sequence from Ong Bak 2 or the wonderful opening of Atonement. There was also the possibility of showing a collection of iconic shots from The Shining.

Instead, I will leave you with possibly the best summary of Steadicam Operating ever committed to film: the legendary late, great Steadicam Operator Ted Churchills' wonderful and funny ode to the device, Day in the Life of a Steadicam Operator, featuring an off-the-cuff cameo from John Belushi.