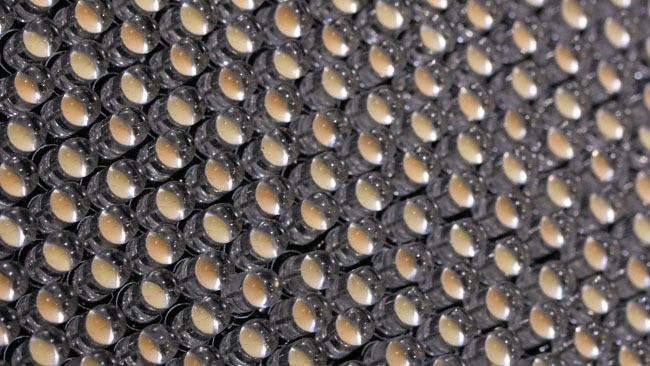 The slight phosphor colour differences between the warmer and cooler LEDs is slightly visible.

LED lighting technology keeps getting better and Aputure's new LS-1 LED panel incorporates useful features and employs an innovative lensing. But does its performance bring it to the head of its class?

When Aputure first released the LS-1 LED panel, it was one of very many similar things, especially if we consider a variety of price points. That's still true now, of course. LED panels are probably one of the most prolifically-produced lighting instruments ever, perhaps because the prototypical way of producing them remains a simple printing of a circuit board, which can be manufactured by practically every electronics plant in the world. (And boy, have they.) The challenge for anything in this field is simply to differentiate itself from the competition.

Aputure's panel is of fairly traditional construction, using an array of 5mm LEDs that initially seem like a straightforward approach, but create a type of light that wasn't available before, at least not in such a small package. Placing tiny, individualised lenses on the front of every emitter produces a sort of projecting softlight that's perhaps most like the output from a very physically large tungsten fresnel – a 5K, maybe – in character, although naturally much less powerful. This is a characteristic of LED panels that was largely overlooked when they first became available, but which can save a certain amount of flagging and rigging.

It's also something that's been lost in the general move toward surface-mounted and remote-phosphor LEDs. While these (particularly the remote phosphor models) have advantages of their own, their output is much more like a bounce or diffuser of the same size as the LED panel, having broadly 180-degree output. This is often inefficient, requiring flagging to prevent spill in just the same way as a conventional poly board. The array of lenses on this traditional design of LED panel is really quite useful. If you don't like it, you can always throw a layer of diffusion over the front. 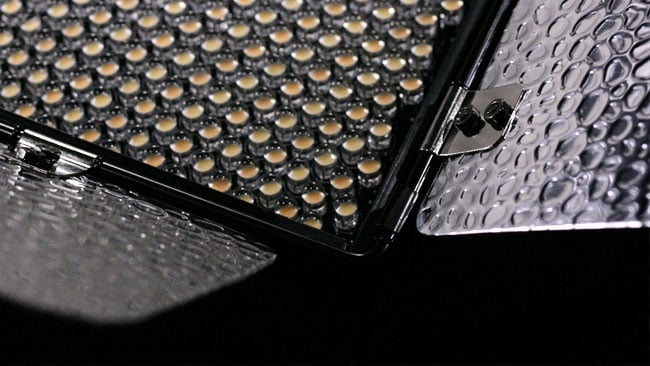 The barn doors are lined with pebbled reflective material, which isn't necessarily a plus because it reduces controllability.

The specific capabilities of the LS-1 panel seem designed to distinguish it from that sea of competition by offering more-or-less every feature that's ever been offered in an LED panel. The C-suffix on the LS-1C, the unit supplied for review, denotes the provision of both 3200K and 5500K LEDs for variable colour temperature. The control unit reads out colour temperature directly and this is useful, although there are two caveats. First, the full 120-watt power is available only at a middling colour temperature of about 4200K. This is a straightforward choice; if you want all 120 watts at 5500K, get the -S suffix device instead. Given that a lot of lighting technologies other than tungsten and HMI, such as ceramic metal halide and fluorescent, can hover around 4200K, this may be a good thing.

The other concern is rather technical. Colour temperature appears as a curved line of white points on a CIE 1931 chart, so that blending between any two white points will not necessarily, or even often, actually produce a theoretically correct series of varying colour temperatures representing true blackbody output. On paper, the output of any two-colour blending device must bias more toward magenta in the middle colour temperature range and/or more green towards the ends of the scale. Characterising this accurately is a task for an optical lab and rather beyond the scope of this article, but it's certainly subtle enough to be invisible to the naked eye compared to true solar daylight.

The controller is tidily laid-out and includes a battery mount and a handy strap for stand hanging.

Colour accuracy is of course a key capability of LEDs. Aputure have done well here in various tests, claiming a TLCI of 96.5 on their similar 5500K LS-1S panel, well into the zone where no postproduction correction will be required. Assuming the LS-1C uses the same 5500K LEDs and, based on the fact that warmer-coloured LEDs tend to have better colour performance than cooler ones, we can take a reasonable degree of confidence in the colorimetry of the LS-1C. Still, this inference is based on other people's numbers and, since even two tungsten lamps may not precisely match, it's always a good idea to have some very fine grades – one eighth – plus and minus green, and colour temperature blue and orange, available to make disparate things match.

XLR connectors for DMX might be preferable, but it's probably a fairly rare use case for filmmaking anyway.

Perhaps the nicest thing about the LS-1C is the chunky metal build quality, which incorporates significant heatsinking. Overheated LEDs lose efficiency, age quickly and drift in colour and, while it isn't possible to determine how well the heatsink is bonded to the emitters without disassembling the thing, it gets warm enough quickly enough to suggest that it's doing its job. The control unit, which looks very nice in photos, feels slightly plasticky by comparison and DMX I/O is on RJ-45 connectors rather than XLRs, but it's a well-designed approach to getting power and control data into the thing, with the inbuilt battery plate.

If the LS-1C seems slightly expensive, it's the colour performance and metal construction that we're paying for. It'll keep getting easier to make LED panels with good colour performance, so the capabilities of Aputure's panels will keep getting easier to find, but right now it's at the head of the pack in terms of colour and has about every feature imaginable into the bargain.