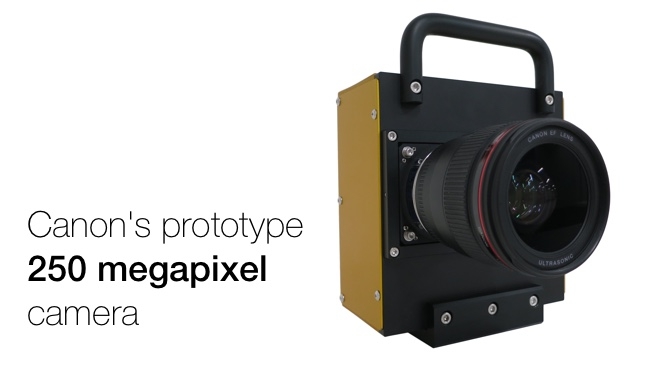 A prototype camera built around the new sensor

Canon’s new 250 megapixel CMOS sensor is smaller than a 35mm full-frame sensor and allows you to distinguish the lettering on an aeroplane 11 miles (18km) away. The company has some impressive new 4K broadcast lenses in time for IBC too.

The APS-H-size (29.2mm x 20.2mm) CMOS sensor incorporates 250 megapixels in a space smaller than the size of a 35mm full-frame sensor and is the world's highest pixel count, according to the company. Canon says that not only does it produce an image of 19,580 x 12,600 pixels but its researchers have overcome the problems associated with ultra high pixel counts with a matching ultra high signal readout speed of 1.25 billion pixels per second. 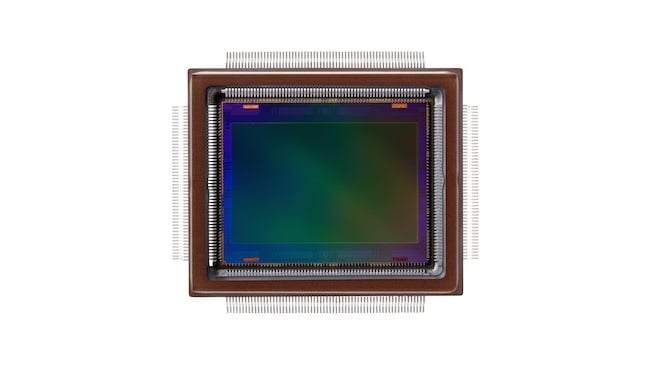 All in all, it makes the sensor capable of capturing images that are 30x the number of pixels of 4K and 125x that of Full HD at 5 frames per second, which is pretty impressive. What’s more the company claims its expertise in the field of miniaturised pixel technology means that the pictures it delivers are both high-sensitivity and low-noise.

Having recently pushed the envelope very hard with its specialist low light camera, it’s no surprise to see Canon forging ahead in another imaging direction with an ultra high resolution unit. As with that model, the company is coy about traditional video and photography usages, stating that it’s mainly aimed at specialised surveillance, ultra-high-resolution measuring instruments and other industrial kit, and the “field of visual expression”. But the triuckle down of all this research is obvious: witness the news that the ocmpany dropped the day after about the forthcoming 8K Cinema EOS.

Whatever, someone’s going to have to come up with a catchier name than 19.5K.

The new lenses are impressive too. 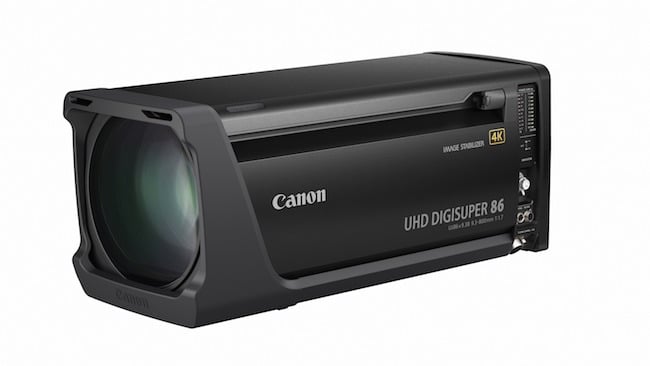 As with the recently launched CJ12ex4.3B, the new glass boasts ‘exceptional’ resolution from the image centre to the edges, at both telephoto and wide angle, and an increased use of fluorite and UD glass, alongside some expert coating knowledge, results in control over ghosting and flare.

As you would expect, the DIGISUPER 86 has an 86x zoom, with a focal range of 9.3mm – 800mm, and the DIGISUPER 90 goes up to 90x, with a 9mm – 810mm focal range. A built-in 2x extender doubles the telephoto power, while maintaining 4K resolution. Canon’s optical Image Stabiliser technology also kicks in to help maintain image quality and focus when tracking moving subjects while compensating for swing-back, and helps ‘square the circle’ often encountered in live broadcast of needing to maintain long focus with shallow depth of field.

Read more about the lenses, and that astonishing new sensor, in the press releases over the page.

When installed in a camera, the newly developed sensor was able to capture images enabling the distinguishing of lettering on the side of an airplane flying at a distance of approximately 18 km from the shooting location.

With CMOS sensors, increases in pixel counts result in increased signal volume, which can cause such problems as signal delays and slight discrepancies in timing. The new Canon-developed CMOS sensor, however, despite its exceptionally high pixel count, achieves an ultra-high signal readout speed of 1.25 billion pixels per second, made possible through such advancements as circuit miniaturisation and enhanced signal-processing technology. Accordingly, the sensor enables the capture of ultra-high-pixel-count video at a speed of five frames per second. Additionally, despite the exceptionally high pixel count, Canon applied its sensor technologies cultivated over many years to realise an architecture adapted for miniaturised pixels that delivers high-sensitivity, low-noise imaging performance.

Canon is considering the application of this technology in specialised surveillance and crime prevention tools, ultra-high-resolution measuring instruments and other industrial equipment, and the field of visual expression.

The new lenses ensure exceptional resolution from the image centre to the edges, at both telephoto and wide angle, thanks to their advanced optical construction. Additionally, an increased use of fluorite and UD glass, combined with Canon’s expert use of coatings, results in exceptional control over ghosting and flare with sharp, high contrast images supporting a large number of tones.

Outstanding focal range and versatility
The new models provide ultimate flexibility – the UHD DIGISUPER 86 (UJ86x9.3B) has an 86x zoom, with a focal range of 9.3mm – 800mm, and the UHD DIGISUPER 90 (UJ90x9B) goes even further to 90x, with a 9mm – 810mm focal range. To ensure operators can capture a diverse range of scenes both lenses also feature a built-in 2x extender which doubles the telephoto power, while maintaining exceptional 4K resolution.

4K scenarios such as live sport, do not tolerate even the slightest amount of shake. Thanks to Canon’s optical Image Stabilizer technologies, the UHD DIGISUPER 86 (UJ86x9.3B) and UHD DIGISUPER 90 (UJ90x9B) deliver crisp, clear results, acquiring maximum precision, even during panning. This is essential for tracking moving subjects at sports matches and events, while compensating for swing-back. Additionally, operators are able to keep subjects in focus, even in challenging situations such as when long focus but shallow depth of field is required.
Built to perform

UHD DIGISUPER 86 (UJ86x9.3B) key benefits:
Outstandingly high resolution 2/3” 4K field lens with 86x zoom and 9.3-800mm focal length (up to 1600mm with 2x built-in extender)
Class-leading beyond-4K performance right to the edge of the image and throughout the zoom range for unmatched quality
High contrast and high resolution in all wavelength regions of the B, G and R channels in the 4K and beyond 4K frequency bands
Similar size and weight to HD field lenses for seamless integration with existing HDTV technical setups and shooting environments
Beyond 4K resolution even with image stabilisation applied
Full support for virtual systems thanks to the built-in 16-bit encoder
Fully compatible with existing Canon HD field lens accessories