Opinion: If you weren't sure the DSLR revolution had ended - this confirms that it has! 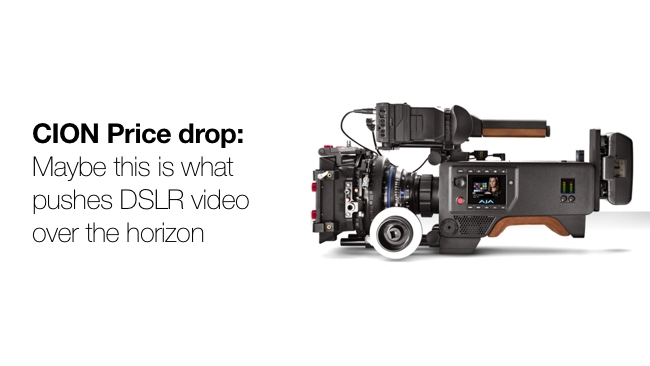 The CION's dramatic price reduction has changed the landscape - again!

[UPDATE] As one of our commenters has pointed out, we should mention that the CION price reduction is part of a "Summer Sale", so we have to assume that the price will go back up at the end of the summer period.

In my recent article The DSLR Revolution Is Over I said that the abundance of cinema-style dedicated video cameras pretty much means that there's no need to buy a DSLR any more if you want to take cinematic-looking video. There are, now, better alternatives. A few people disagreed with this, but, mostly, those that did, didn't completely get the point I was making, which was that now that such a large choice exists, DSLRs aren't guaranteed a place on your shortlist. That doesn't mean that video capable DSLRs aren't available now, or that you shouldn't buy one if the form factor suits your working style: it's just that you don't have to.

Well, so much for my opinion. Now, it's pretty much become a fact, with the dramatic drop of around 45% in the price of the AJA CION.

This is a camera that's had mixed reviews, but we rather like it. You have to understand what kind of camera it is, and that is that it takes pictures that are ready to use. There's little concession to the current trend for "flat" shooting. What you get on your memory card is video that you can pretty much use straight away. That's good for most people. It avoids a complex workflow and you will have less need to grade the footage before you use it.

Up against it you have the new URSA Mini, and (to name only a few) the Sony FS7.

Meanwhile, in the more "traditional" DSLR-style form factor, but not actually DSLRs (because they don't have a mirror) there's the Panasonic GH4 and the Sony Alpha 7S.

Not exactly a shortage of choice, then.

And that's where the market comes in. You can't ignore it, especially if you're a  manufacturer. And, however good your products, if they don't pay heed to the market (and if they don't have some other factor that can distort market forces, like a famous name) then when the competition hots up, you have to respond.

It's happened before. The Canon EOS 1D C remains a great camera: it's rugged, takes amazing stills, and shoots cinema quality 4K video in a format that's universally editable. And yet it became too expensive compared to other 4K-capable cameras. So Canon reduced the price and it's now a sensible (and fairly easy to justify - if you need that kind of camera) buy.

We're glad that the CION is now in a space where it can compete. It's a good camera and widens the choice in its new price zone.

Read The DSLR revolution is finally over here