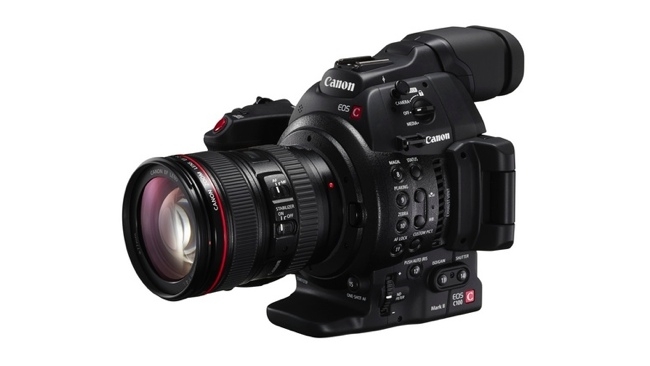 Billed as a comprehensively upgraded package, the Canon EOS C100 Mark II adds some interesting features over and above its predecessor, most notably ramped up image quality and built in Wi-Fi.

The new entry in Canon’s roster uses plenty of technology found in the flagship EOS C500, most notably a Canon Super 35mm 8.3MP CMOS sensor which it couples with a DIGIC DV 4 processor. A newly extended ISO range of 320 to 102,400 ensures low light capabilities, while the company also says it is running a new image processing system which reduces moiré and aliasing.

Both Canon’s Dual Pixel CMOS AF and Face Detection AF technologies are supported, while the useful Dual Format recording system allows operators to simultaneously capture Full HD footage in both MP4 (up to 35Mbps) and AVCHD (up to 28Mbps), with frame rates that climb up to 60p. Alternatively, users can chose to record HD and SD footage to separate SD memory cards. A new built-in microphone has been added to the camera body, meanwhile, enabling sound recording for continuity in the smallest possible camera configuration.

The integrated Wi-Fi connectivity is a first for the Cinema EOS series and potentially rather useful, allowing operators to both transfer files via FTP and quickly share low res SD proxies directly during a live shoot. The unit’s screen has been redesigned and now boasts a higher contrast OLED display which it can flip out to the side, while finally an improved and tiltable Electronic Viewfinder (EVF) and a larger eyecup should help a good deal during the shooting process.

Greater creative opportunities
The EOS C100 Mark II features two recording formats to suit the needs of different productions.  Dual Format recording allows operators to simultaneously capture Full HD footage in both MP4 (up to 35Mbps) and AVCHD (up to 28Mbps) variants, using frame rates of up to 60P. Alternatively users can chose to record HD and SD footage to separate SD memory cards for maximum workflow flexibility and easy sharing. This range of options further expands the world of creative opportunities offered by the EOS C100 Mark II and also makes the capture of slow and fast motion action possible.

Integrated Wi-Fi connectivity – a first for the Cinema EOS series – ensures that sharing footage from the camera is now easier than ever thanks to the ability to transfer files via FTP.  In situations that demand a fast turn-around, such as news or events reporting, Dual Format recording allows operators to quickly share low resolution SD files directly from the camera whilst the security of an HD copy is maintained.

Uncompromising operation, wherever you are
Thanks to its robust, compact design, the EOS C100 Mark II is ideal for shooting in a wide range of applications, especially those involving a single shooter. Browser-based camera control via built-in Wi-Fi and support for Canon’s multi-functional RC-V100 remote control allow the camera to be positioned in locations that previously could not have been considered, enabling crews to maintain creative control even in the most awkward or obstructive situations.

The EOS C100 Mark II’s screen has been redesigned and now flips out to the side to provide greater monitoring possibilities, including allowing users to frame the shot whilst in front of the camera. A new OLED display delivers higher contrast, more vivid colours and faster response times, even in bright conditions. The camera also features an improved tiltable Electronic Viewfinder (EVF) and a larger eyecup to provide greater flexibility and accuracy during shooting. Additionally, a range of professional audio features accompany a microphone in the handle unit, while a new built-in microphone has been added to the camera body, enabling sound recording for continuity in the smallest possible camera configuration.

EF lenses – unlimited possibilities
As part of the EOS system, the EOS C100 Mark II is immediately compatible with – and optimised for - Canon’s world-renowned range of interchangeable EF lenses and 4K EF cinema lenses, providing both the power and versatility to meet virtually any creative challenge.