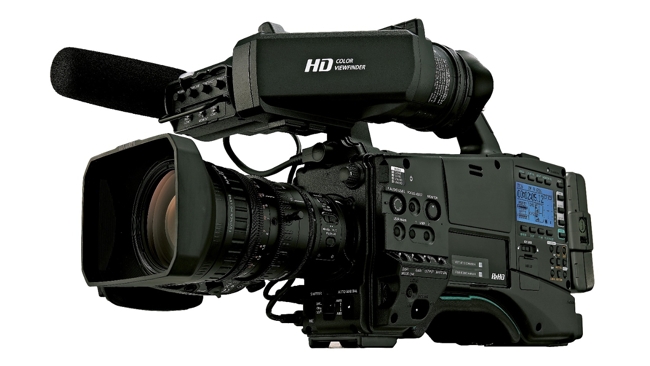 The AJ-PX800 is billed as a new 2/3-inch, three-chip shoulder-mount camcorder with AVC-ULTRA recording. What’s more — or less really — it weighs a little over six pounds, making it the industry’s lightest camcorder in its class and rather tempting to ENG crews.

In fact, Panasonic reckons it couples low weight and low power consumption with a pleasing affordability, the PX800 topping out at $19,500 with viewfinder and lens (body only is $15,000).

The camera offers three AVC-LongG bit rates: AVC-LongG50/25 providing10 bit/4:2:2 quality at bitrates of approximately 50/25 Mbps, and the more economical AVC-LongG12, which is optimised for field wireless workflows. The increasingly obligatory network functions are all present and correct, the unit supporting wired LAN, wireless LAN and 4G/LTE connections, enabling on-site preview, streaming and uploading, while AVC-Proxy encodes in parallel enabling fast offline editing at bitrates from 6Mbps down to as low as 800Kbps.

A side-mounted LCD display that gives access to the camera menu is a nice touch, while electronic toys include Chromatic Aberration Compensation to maximise lens performance, Dynamic Range Stretch (DRS) function to help compensate for wide variations in lighting, and a 12 + 3 skin tone Axis Matrix Control.

Read the full release over the page

NEWARK, NJ (September 4, 2014) – Panasonic has announced the AJ-PX800, a new 2/3-inch, three-chip shoulder-mount camcorder with AVC-ULTRA recording. Weighing a little over 6 pounds, the PX800 is the industry’s lightest camcorder in its class.

Delivering the trifecta of low weight, low power consumption and affordability, the PX800 is ideal for virtually all broadcasting needs as well as sports or live events. Built-in network functions support wired LAN, wireless LAN and 4G/LTE connections, enabling on-site preview, streaming and uploading data to a server quickly and easily at low cost with a PC/Mac, tablet or smartphone; or users can connect to the camera via WiFi to control, add or edit metadata, view proxies, or watch live streaming for logging or monitoring.

The PX800 records in AVC-LongG to provide on-air content direct from the shooting location and for workflows using content transferred over the internet. The camera offers three AVC-LongG bit rates: AVC-LongG50/25 providing10 bit/4:2:2 quality at bit rates of approximately 50/25 Mbps, and the more economical AVC-LongG12, which is optimized for field wireless workflows.

The PX800’s compact body provides superb mobility, along with low power consumption of 22W. The 2.2 megapixel 2/3 type 3MOS (RGB) image sensors offer full-pixel HD (1920 x1080) resolution, F12 (59.94 Hz) or F13 (50 Hz) sensitivity and low noise with an S/N of 62 dB (with DNR ON). It also achieves rich gradation and vibrant color reproduction. The shoulder-type design allows the use of a variety of interchangeable B4 mount 2/3-inch lenses.

The PX800 can record in AVC-Intra100/50 (1080/60i, 50i, 30p, 25p, 24p and 720/60p,50p, 30p, 25p, 24p), DVCPRO HD, DVCPRO50, DVCPRO and DV, and is 50 Hz and 59.94 Hz switchable for worldwide use. The camcorder will be equipped with Chromatic Aberration Compensation (CAC) to maximize lens performance; Dynamic Range Stretch (DRS) function to help compensate for wide variations in lighting; a highly accurate flash band detection and compensation algorithm that minimizes this effect; and a 12 + 3 skin tone Axis Matrix Control.  The PX800 delivers seven-mode gamma selection and extensive digital image settings; there are two P2 card slots (microP2 cards can be used with an adaptor) and an SD card slot for
proxy/metadata recording.

Professional interfaces include MON out (can be set to output HD-SDI), HDMI out, HD/SD-SDI in/out, genlock in for multi-camera operation, timecode in/out, USB 2.0 (Host and Device) and a two-channel UniSlot compatible wireless receiver.

Innovative features include a smart user interface that permits accessibility to the camera’s extensive functions from an LCD display on the side of the camera; an (optional) 16:9, 3.45-inch, 920,000-dot resolution LCD color viewfinder, which doubles as a LCD monitor when open; a simplified waveform and vectorscope; a 10-pin remote terminal enabling remote camera operation; and an optional camera studio system.