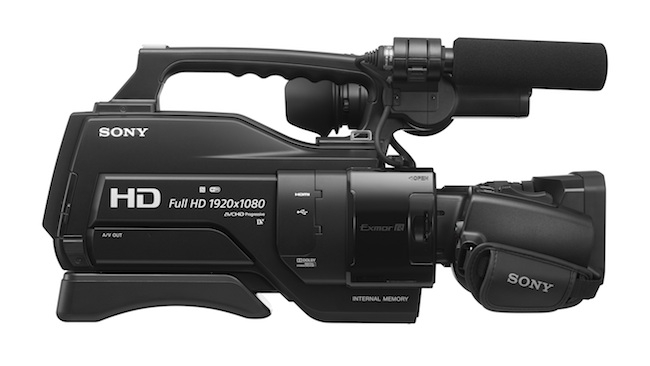 There are no pics of the latest addition to the XDCAM family, the 2/3-inch CCD PXW-X500, just yet, but it promises to deliver low-noise images across multiple recording formats. Three newly-developed 2/3-inch-type Power HAD FX CCDs produce high-quality pictures with a reported high signal-to-noise ratio (60dB), while maintaining high sensitivity levels (F11 at 1080/59.94i and F12 at 1080/50i).
Other key features according to Sony include:

While the X500 is primarily aimed at newsgathering, the HXR-CX2500E’s built-in LED light is designed to allow high-quality shooting in low-light environments, with high sensitivity and low noise – perfect for event shooting and the videography market in other words. Other headline features include: 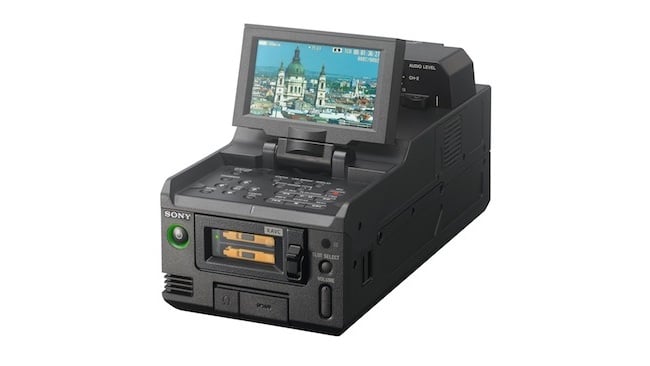 And lastly the company also announced that the PMW-1000 XDCAM HD422 recorder will become capable of supporting XAVC Long 4:2:2 1080/50i by means of a new, free software version upgrade due in December. So will the PMW-300 and PMW-400 XDCAM camcorders.

And absolutely lastly it’s interesting too that Sony is choosing to unveil all these new units at the Beijing International Radio, TV & Film Exhibition (BIRTV) in China rather than waiting a couple of weeks for IBC, a sure sign that eyes are turning east again when it comes to this mid-range level of equipment. Both camcorders will be available in Europe from in Q4 2014 — no data on a US release just yet.

Read the full press releases over the page.

Basingstoke, 25 August 2014: Sony has today introduced the PXW-X500, a solid-state memory XDCAM camcorder that combines sensitivity of picture capture with a proven, comfortable ergonomic design and support for a wide variety of recording formats. The PXW-X500 delivers superior picture quality thanks to its unique three-chip 2/3-inch type new CCD image sensors, serving to remove issues associated with motion artifact and rolling shutters. The camcorder, which succeeds its well-received predecessor, the PMW-500, is ideally purposed as an outstanding acquisition tool on a 1080 progressive platform for a broad range of HD production applications, such as ENG, sports productions, live productions and documentaries.

Powerful Slow & Quick motion up to 120p frame rate. The PXW-X500 offers a powerful ‘Slow & Quick Motion’ function. By utilising the XAVC codec, the X500 can record at a maximum frame rate of 1080/120p, which is a slow motion effect five times higher than the industry standard frame rate of 23.98p. The newly developed CCD image sensors and the camcorder’s outstanding image processing abilities enable this spectacular performance.

Future upgrade to enable remote live streaming functionality. By upcoming upgrade in early 2015, the X500 will also offer live streaming of proxy content over Wi-Fi or LTE. The streaming function will also become available for Sony’s PXW-X180 XDCAM handheld solid-state memory camcorder that was launched to the market in August 2014, and will be compatible with the CBK-WA100 and CBK-WA101 adapters, which allow XAVC proxy files to be created and saved on an SD card housed within the adapter.

Other key features of the PXW-X500:

Sony also announced the new PMW-RX50 XDCAM portable recorder, which features a compact, lightweight design and is capable of SxS recording and playback. The PMW-RX50 supports the XAVC Intra 4:2:2 1080/59.94p and XAVC Long 4:2:2 1080/59.94p formats, as well as traditional formats such as MPEG HD 4:2:2, 4:2:0, MPEG IMX and DVCAM. It has been created to act as the perfect companion for the PXW-X500, especially in applications such as field shoots and on-site location shoots.

Other key features of the PMW-RX50:

Sony has also announced that the PMW-1000 XDCAM HD422 recorder will become capable of supporting XAVC Long 4:2:2 1080/50i by means of a new, free software version upgrade, as will the PMW-300 and PMW-400 XDCAM camcorders.

The PXW-X500 and PMW-RX50 will be showcased at the Beijing International Radio, TV & Film Exhibition (BIRTV) in China from 27-30 August 2014, and will be available in Europe from October 2014. The XAVC Long 4:2:2 software version upgrade for the PMW-300 and PMW-400 XDCAM camcorders and PMW-1000 XDCAM recorder will be available in Europe from December 2014.

Basingstoke, 25 August 2014 – Sony today announced the HXR-MC2500E, a new addition to its High Definition (HD) range of memory camcorders. The HXR-MC2500E offers an ideal balance of performance and functionality in the digital era with a wide variety of features necessary for serious videographers, all well within their reach at an affordable price point. Sony has designed the HXR-MC2500E with several enhancements over its existing HXR-MC2000E camera model, including an improved Exmor™ R CMOS sensor and new features such as a built-in LED light, OLED viewfinder, Wi-Fi functionality, DV memory recording and a Multi-Interface (MI) Shoe. With these enhancements over previous models, the HXR-MC2500E is an ideal cost-effective solution for event videographers, who desire strong low-light performance, high picture quality, operational flexibility and reliability.

“The HXR-MC2500E is a prime example of how we’ve combined advanced imaging technologies with a host of operational features that the market today needs,” said Robbie Fleming, Product Marketing Manager, at Sony Professional Solutions Europe. “Our customers now enjoy a more comprehensive product offering from Sony, with this model providing practical functions that professionals need, such as wireless connectivity and longer recording time.”

Key Features of the HXR-MC2500E

Wi-Fi/NFC functions for seamless connection to smartphones
The HXR-MC2500E can connect to mobile devices such as smartphones or tablets via a Wi-Fi connection, enabling monitoring and remote control functions such as start/stop recording, zoom control, iris control and touch auto focus. Furthermore, it is also NFC-capable (Near Field Communications) to allow easy, one-touch wireless connections to compatible mobile devices.

Ideal for long event shooting thanks to embedded 32GB internal flash memory and low power consumption
A 32GB internal flash memory storage system on board of the HXR-MC2500E enables longer duration recording of more than 150 minutes. In addition, by using a combination of the internal flash memory and the MS/SD memory card slot, recording functions such as “Relay” and “Simultaneous” for backup can be available. When Sony’s L-Series InfoLithium battery NP-F970 (optional) is used, the HXR-MC2500E is capable of continuous recording of up to 14 hours. This is a critical feature for important occasions where operators may not have the luxury to stop the camera, such as during the filming of wedding ceremonies or other live events.