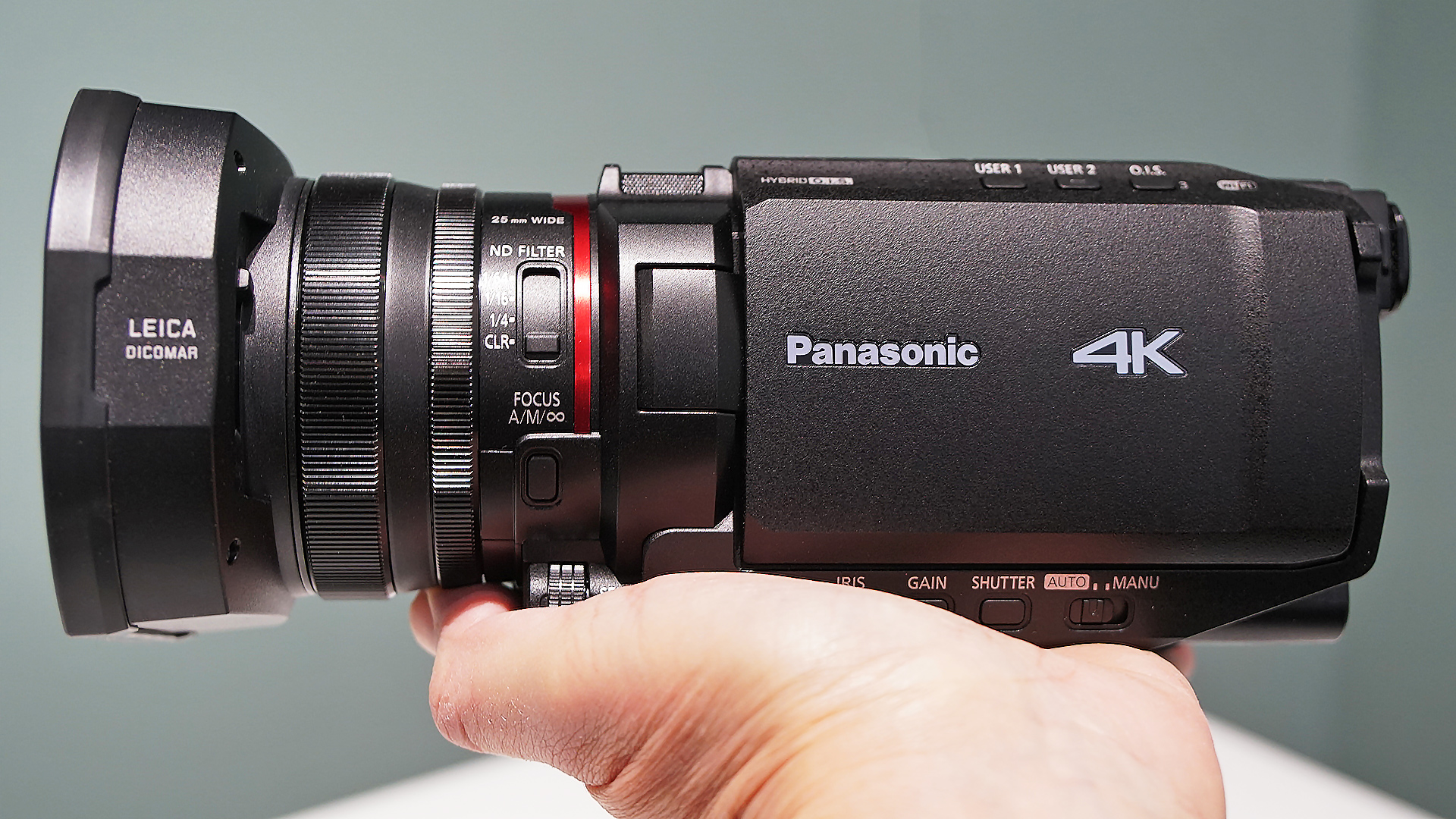 Panasonic's AG-CX10 might be absolutely tiny, but as Ned Soltz discovers, it's full of potential.

The Panasonic AG-CX10 is absolutely tiny, but with well thought out controls.

With a basic camera weighing just under 2 pounds or 3 pounds with top handle and battery, the Panasonic AG-CX10 is the epitome of a 4K 60p compact powerhouse for ENG, documentary, streaming, blogging and just generally on the run video. It has potential as a significant tool for TV news with its miniP2 1080 10 bit recording to MXF files or for documentary with up to 4K 60P in either AVC or H.265 compression at up to 4:2:2 10 bit.

Built-in WiFi makes it a streaming camera. It is controllable via an external app and it can fit into an NDI|HX ecosystem with an optional $299 license.

Add to that 24x optical or 48x digital zoom starting from a 25mm equivalent wide angle. And then there’s face detection auto focus/auto exposure, a built in adjustable video light, and manual focus and zoom rings in addition to a servo zoom. 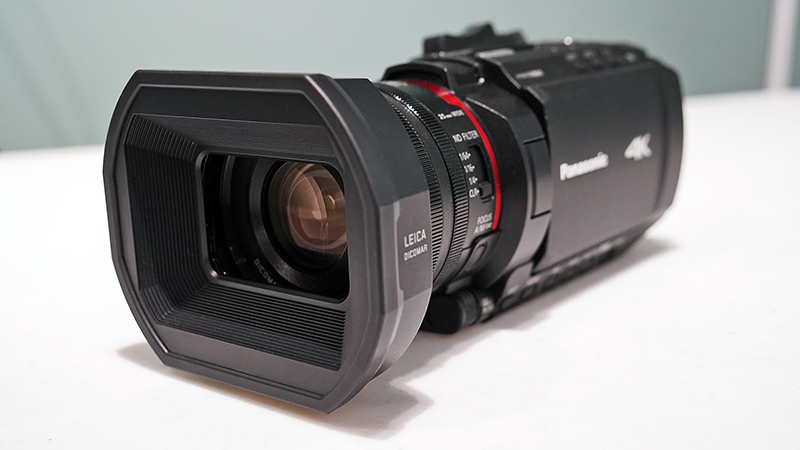 Those looking for a cinema style camera should look elsewhere. There is no V-Log and certainly no RAW options. That’s not why you buy the AG-CX10. It does have the typical Panasonic picture profile options with cine-like gammas, fluorescent, etc. But I wouldn’t bother with them unless under very specialized shooting requirements. This is just a camera that you point and shoot, and can feel confident in pointing and shooting.

For one thing, the autofocus is fast and accurate and I didn’t find the camera hunting for focus. Turning on facial autofocus, it really does find people's faces easily. The touch screen allows the selection of one face among multiples.

In UHD and HD modes, the AG-CX10 has a 5-axis hybrid Optical Image Stabilisation system, which delivers stable images. I fear that far too many less-experienced shooters see OIS in a camera and believe that it will produce gimbal-like stabilisation. That is certainly not the case here, but a steady hand can get a decent hand-held shot from it. As lightweight as this camera is, it is highly useable with small gimbals or even, with the top handle and screen removed, mountable on a drone with a 2-3 pound payload capacity.

Of course as a dedicated video camera as opposed to a mirrorless or DSLR camera, it has 3 levels of ND filtration plus Clear. 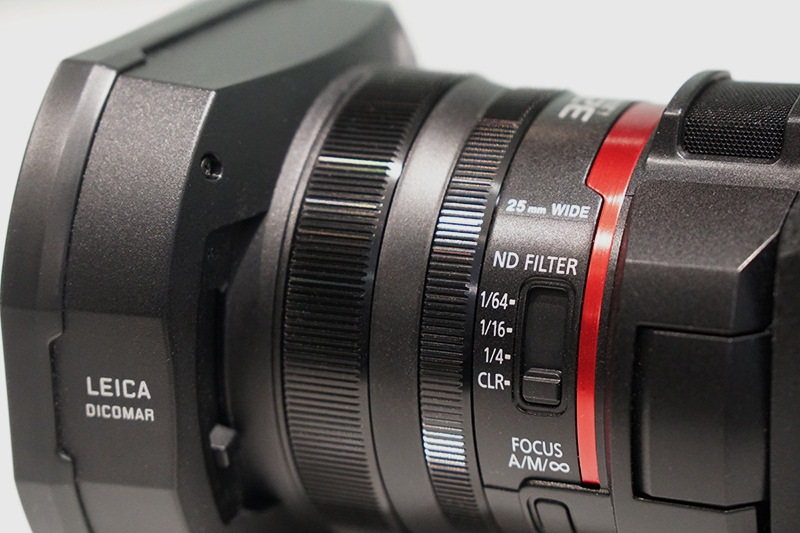 Lens controls on the Panasonic AG-CX10.

The two manual lens rings are actually in a useable position, something that you don’t often see in tiny cameras. Don’t expect a perfect manual zoom though. No servo zoom lens can match the feel of a true manual one, unless it has the ability to disengage the drive motors. However, the AG-CX10’s manual focus ring has a good throw and is useful. However, as noted, the AF is so accurate and fast that this will be generally used as an on-the-go camera where there isn’t the luxury of setting up a MF shot.

The SD card slots can be set up for dual functionality, with either simultaneous or continuous recording. It is also possible to use microP2 media for recording only as a 10-bit 4:2:2 MXF-wrapped file in either 1080 or 720 resolution at 59.94i. This is basically an ENG format, helping to make the AG-CX10 an inexpensive, quality addition for the news truck.

Another feature for news and documentaries is IR shooting. Turn off the IR filter button and 850mm wavelength IR lights can illuminate dark places. I did not have any IR lights available, so I could not test this feature, but it is a useful addition. 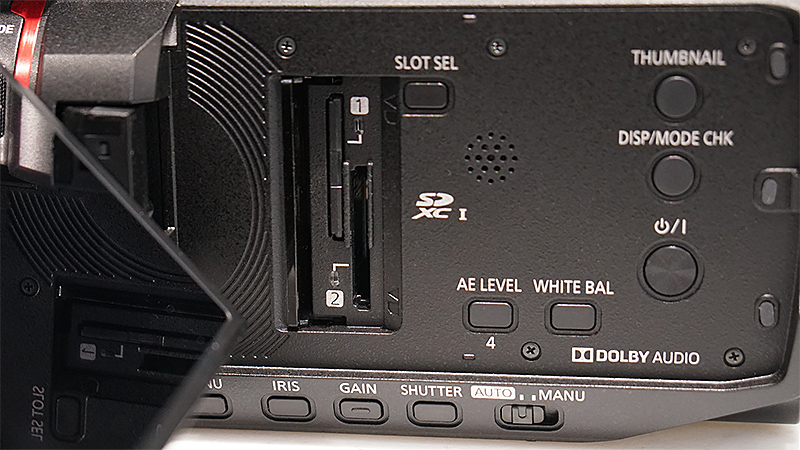 SD card slots and side controls on the AG-CX10.

There are eight gamma modes, and the Cine-like modes are derived from VariCam gammas. Thus the CX-10 could be used as a B or C camera in VariCam based higher production tier pieces.

I didn’t test the “soft skin” option. I go all the way back to the days of Promist filters on lenses to soften skin, but I think with today’s post production tools such things are better left to the editor or colorist.

I really liked the little built in LED light. It was really too intense at 100% both for exposure as well as for talent. But I found when dropping it to 50% or less, the subject could then tolerate the light and it added very adequate facial fill.

The main flip-out LCD screen is sharp, and the touch screen here controls important functions. The top handle unit contains an XLR interface. A stereo microphone is built in but it does not include a camera mountable XLR mic. You'll have to bring your own to the party. 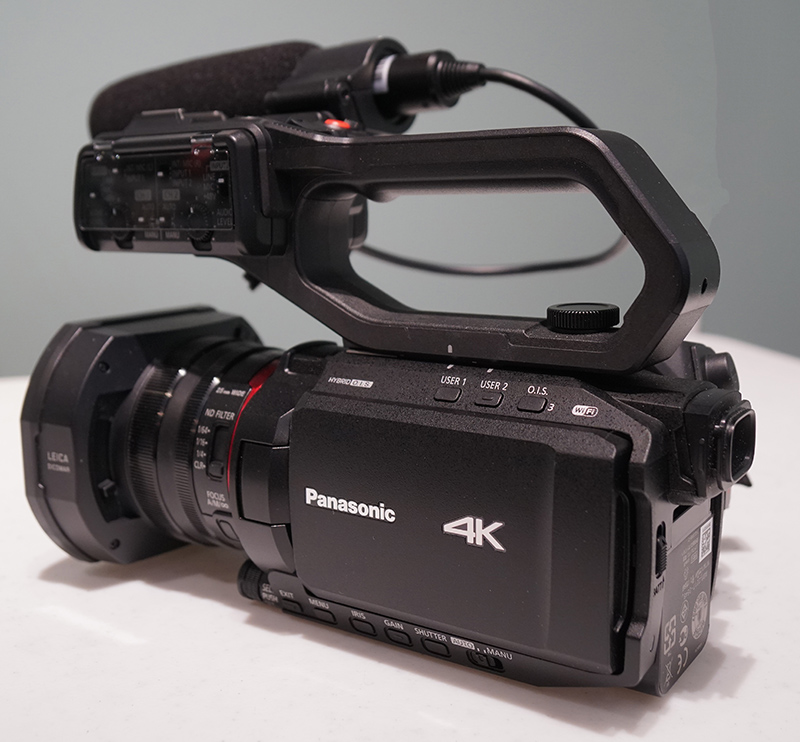 As a camera targeted for ENG, quick start up is essential. I was consistently able to power up camera and be ready to shoot in under 5 seconds.

I am generally not a fan of touch screens in small cameras. Relegate that perhaps to chubby clunky fingers but also to what I personally consider to be a cumbersome way of adjusting camera settings. Nonetheless, the touchscreen is responsive. And it is particularly so when using it to set face recognition. While it is not a feature I would use particularly, it is good to have for those who find it useful.

But the greatest usability feature of the camera is its size and form factor. We are now squarely in an era of portability. News coverage needs to be fast, mobile, compact and with connectivity. Cameras that can be hand held, mounted on small gimbals or larger capacity drones combined with a broadcast quality CODEC means smaller news crews, as well as greater mobility for those crews. While we’re not quite ready to proclaim the end of the shoulder-mounted ENG camera, devices such as the CX10 now co-exist on a more equal footing to the big kids, and in some circumstances may even be preferable.

As a camera for unscripted TV, its internal 4K codecs and extremely fast accurate autofocus with face tracking can deliver the shots that run and gun unscripted demands. And where manual focus and manual iris is desired, the large focus rings are surprisingly easy to access for such a small camera. Of course, the servo lag of the manual focus cannot compare to a truly manual lens.

The CX10 is in all regards a “camera for today.” The combination of versatility, codecs, broadcast-level MXF HD 4:2:2 10 bit recording, 4K options and just overall performance should place it high on purchasers’ wish lists. Add to that a highly portable form factor and light weight and you have just what today’s world needs.

The AG-CX10 is versatile, practical, and affordable at a street price of $2595 US. It’s well worth consideration by those shooting in the ENG, doc, streaming and unscripted TV space. Panasonic truly deserves to be proud of this small wonder.